Editor’s note: Are you affected by Hurricane Matthew? If it is safe for you to do so, WhatsApp us on *+44 7435 939 154* to share your photos, experiences and video. Please tag #CNNiReport in your message.

“The river has overflowed all around us,” church pastor Louis St. Germain said. “It’s terrible… a total disaster.”

St. Germain, who spoke to CNN on the phone from Les Cayes, Haiti, said the storm sheared a wall off of his house and tore roofs off many buildings in the area.

And in a significant setback for emergency responders and aid relief efforts, the bridge that connected Port-au-Prince with southern Haiti collapsed Tuesday.

There are reports of communications towers being affected by downed trees and officials are worried it will hamper the emergency response.

“We’ve already seen deaths. People who were out at sea. There are people who are missing. They are people who didn’t respect the alerts. They’ve lost their lives,” Interim Haitian President Jocelerme Privert said at a news conference.

The Category 4 hurricane made landfall near Les Anglais, Haiti, around 7 a.m. ET, according to the National Hurricane Center. By afternoon, the center of the storm was back at sea, churning north toward Cuba.

Forecasters say the eye of the storm, which is located about 65 miles east-southeast of Guantanamo, Cuba, and moving at about 9 mph, is expected to hit eastern Cuba Tuesday afternoon.

Ferocious rain and wind were already thrashing Haiti before the storm made landfall. And forecasters said Tuesday that life-threatening flash floods and mudslides were likely.

Up to 40 inches of rain could be dumped on the impoverished nation, which is still recovering from a devastating earthquake and a cholera outbreak. 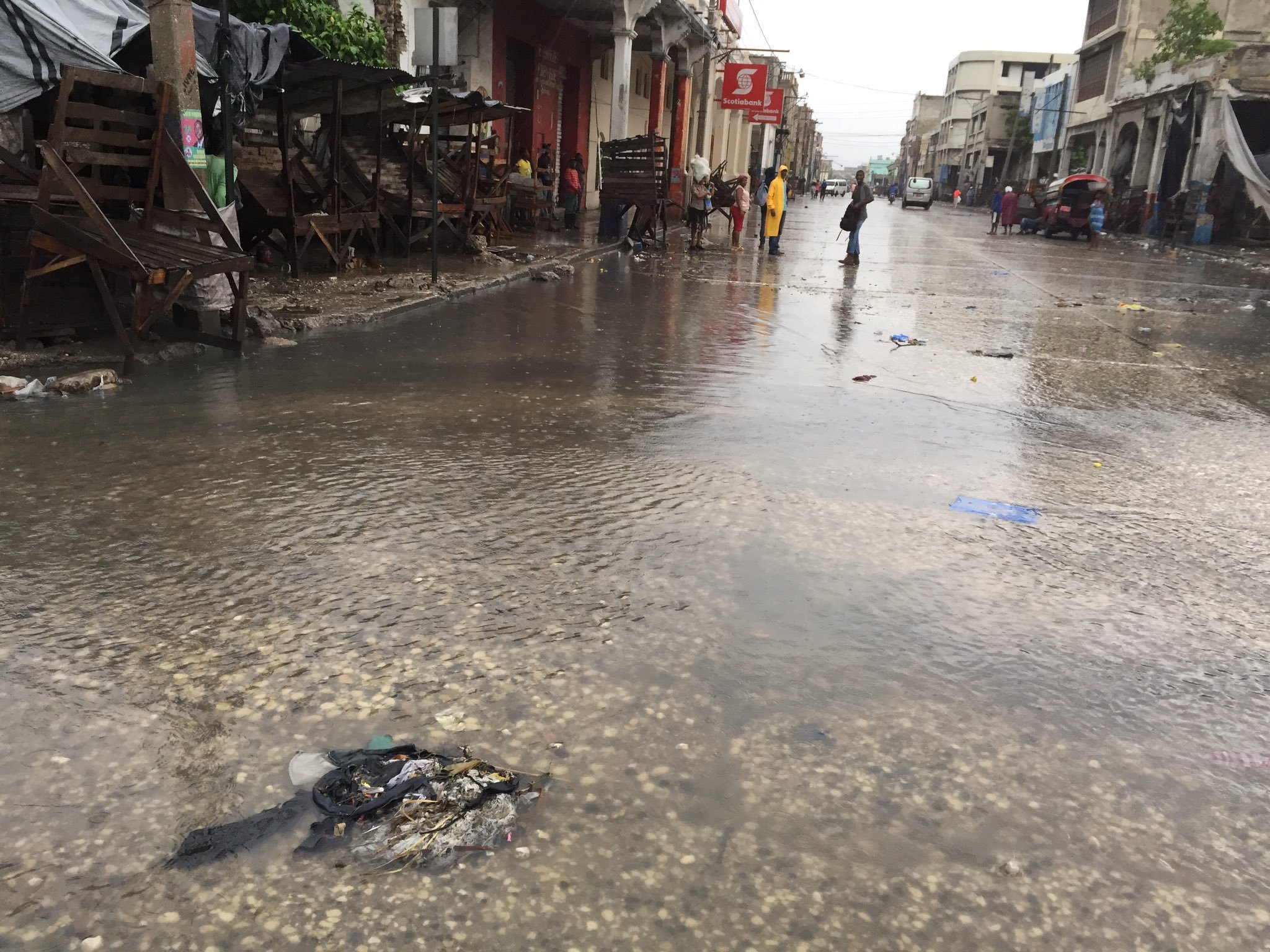 Les Cayes Mayor Jean Gabriel Fortuné said Tuesday morning the storm was slamming into his city. He posted videos on social media that showed wind whipping through trees as heavy rains pelted people on the streets.

The United Nations mission in Haiti shared a photo of people wading through water in a flooded street there.

Eyewitnesses also reported streets flooding in the capital of Port-au-Prince.

In one neighborhood, a river swelled to dangerous levels, Junior Jules told CNN’s iReport. A video Jules sent to CNN showed rain-soaked residents wandering around the Crois-des-Missions bridge as rising waters rushed underneath.

As Matthew drenched Haiti with dozens of inches of rain, Cuba, the Bahamas and the United States took steps to prepare for the storm’s arrival in the coming days.

Forecasters predict the storm will move over the southeastern and central Bahamas Tuesday evening and approach the northwestern Bahamas Wednesday evening.

Seven people have died in incidents connected to Hurricane Matthew within the past week, authorities said.

Four people in the Dominican Republic died, the government announced, without providing any details about how the victims passed away.

In Haiti, Guillaume Albert Moleon, an Interior Ministry spokesman, said one fisherman died on Sunday. A second fisherman is presumed dead, but the body has not been recovered.

In St. Vincent and the Grenadines, a teenager died in a landslide as he was cleaning a drain behind his house, according to Michelle Forbes, deputy director for the National Emergency Management Office. The boy died Wednesday after storms from Matthew passed.

The hurricane could cause further devastation for Haiti as much of the country’s infrastructure remains weak after the 2010 earthquake that killed more than 200,000 people.

The Haitian government has identified about 1,000 facilities as temporary safe havens. More than 300,000 people are in shelters across the country, the United Nations said.

After the storm clears Haiti, residents could face risks from another threat: standing water.

“That means a potential spike in cholera cases,” said John Hasse, the humanitarian aid agency World Vision’s national director in Haiti. “Other mosquito-borne diseases that have been more or less controlled are going to rear their heads.”

Haiti is still recovering from a post-quake cholera outbreak that killed 10,000 people.

Forecasters said Matthew could dump up to 20 inches of rain in Cuba.

The United States, taking no chances, began to airlift 700 family members of military personnel stationed at Guantanamo Bay to Florida. The 61 detainees held by the United States as alleged enemy combatants will not be evacuated, officials added.

After skirting Cuba, Matthew is expected to hit the Bahamas and turn toward the United States. It should lose some strength, but still have 120 mph winds.