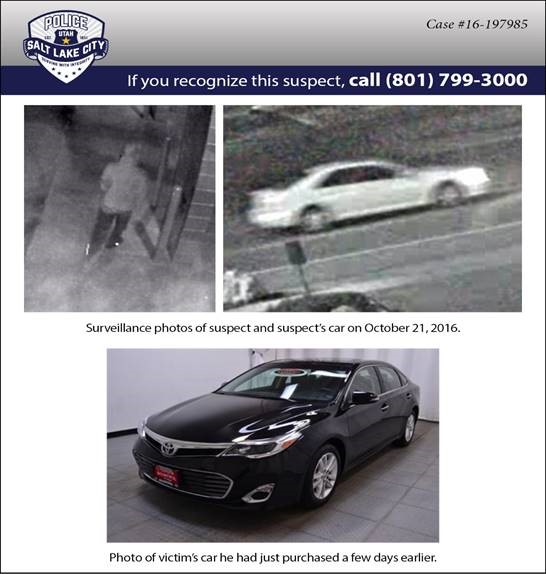 SALT LAKE CITY – Do you recognize this person or car?

Police said 33-year-old Christian Gutierrez-Marquez was washing his car near 1075 S. Redwood Rd. when a fight started with another man.

That fight ended in the suspect fatally shooting Gutierrez-Marquez on Oct. 21.

His car was stolen and later found early the next morning at 1532 West High Ave., not far from the car wash.

Officers said a witness saw the victim’s car hours earlier parked in that spot, before it was set on fire.

Police said the suspect car is a white, 4-door vehicle that a woman may have been driving.

This suspect vehicle may have been stolen before the murder.

The suspect is described as a Hispanic or Caucasian man who was wearing a gray or light-colored hoodie, jogging pants and shoes with reflective material.

Text anonymous tips to 274637. Start your text with TIPSLCPD and include any relevant information.