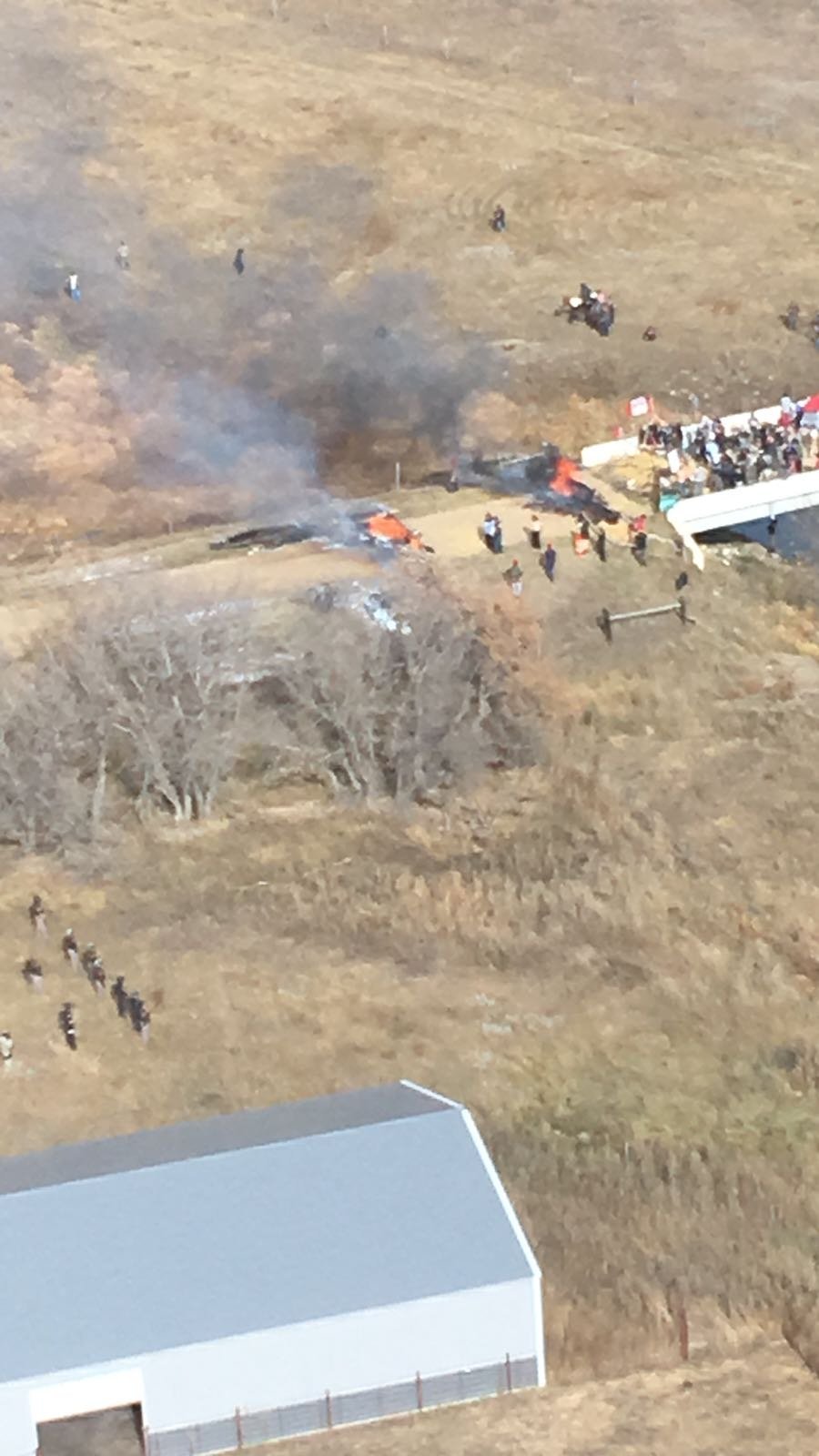 SOUTH OF BISMARCK, North Dakota (CNN) — The standoff over the Dakota Access Pipeline is heating up, and protesters say they won’t back down.

As work resumed on the pipeline Friday, authorities provided details of the violence that boiled over a day earlier when police in riot gear faced off with protesters on horseback.

After hours of clashes, law enforcement officials arrested 141 people on Thursday. Another person was arrested Friday, bringing the total number of arrests since August 10 to 411, the sheriff’s office said.

Tensions are so high that Amnesty International is sending representatives to monitor the arrests, CNN affiliate KFYR reported.

Protesters set fire to nine vehicles, construction equipment and debris on a bridge, resulting in the closure of Highway 1806, the Morton County Sheriff’s Office said. A woman being arrested pulled a pistol from her waistband and fired shots, but she didn’t hit anybody.

Protesters accused law enforcement of being too aggressive.

“When they saw this military force coming over it took us back to days of the cavalry riding in and wiping out a village,” said Mekasi Horinek, a protest camp coordinator.

One man showed bloody spots on his horse’s legs and said officers fired bullets at unarmed protesters, according to a video posted on the verified Facebook account of the Indigenous Life Movement.

By Friday morning, construction equipment was beeping and clanking at the construction site — and protesters were gone.

Law enforcement had cleared the area and pushed protesters to another encampment miles away.

It’s unclear whether the wave of arrests will slow protest efforts.

A court decision allowing construction of the $3.7 billion pipeline across four states hasn’t dampened demonstrators’ furor over the project. The developer calls it an economic boon that will make the United States less dependent on imported oil. But protesters say it threatens the environment and will destroy Native American burial and prayer sites as well as artifacts.

The message from law enforcement Thursday night was clear as Humvees and helicopters flooded the area to break up an encampment near the pipeline’s path.

Authorities accused most of the arrested demonstrators of trespassing on private property. Supporters of the Standing Rock Sioux Tribe had earlier set up tents and tepees on the land, which they said belongs to the tribe under a 19th-century treaty.

Both sides have accused the other of increasingly aggressive tactics, from police strip searches and violence to protesters destroying construction equipment.

North Dakota Highway Patrol Lt. Tom Iverson said law enforcement had to respond after protesters put up an illegal roadblock on a state highway and trespassed on private property. A group of protesters, he said, threw sticks and Molotov cocktails at officers and refused to leave.

Most protesters were peaceful, he said, but he described the group that threw things at officers as “rioters” and “agitators.”

“We need to protect ourselves. And we need to make sure everybody stays safe,” Iverson said Friday. “So we responded to the situation appropriately, utilizing the assets that we have at our disposal.”

One protester told KFYR that she was afraid as police closed in.

“There are armed people standing there with their guns with their fingers on the trigger, and so I feel really helpless right now,” said Kandi Mossett of the Indigenous Environmental Network.

‘I’ve never been around so peaceful a stand’

The conflict has become a celebrity cause, drawing the support of actress Shailene Woodley, who was arrested in an October 10 protest, and actor Mark Ruffalo, who provided infrastructure for the camp, including solar panels.

Ruffalo told CNN’s Jack Tapper that he did not witness violence when he visited there, but he heard stories from people who said they were thrown in jail naked.

Protesters are trained in peaceful resistance, he said. No one is allowed in the protest area without training.

“The mantra of the place is, ‘It’s not the police, it’s the pipeline that we’re protesting or protecting ourselves against.’ They spend basically the entire day doing prayers, chanting,” he said. “I’ve never been around so peaceful a stand.”

After the pipeline is completed, it would shuttle 470,000 barrels of crude oil a day, developer Energy Access Partners said. That’s enough to make 374.3 million gallons of gasoline per day. From Illinois, the oil could go to markets and refineries across the Midwest, East Coast and Gulf Coast.

Supporters say it would significantly decrease American reliance on foreign oil and free up railways to transport crops and other commodities.

The Standing Rock Sioux tribe and its supporters say pipeline construction will destroy burial sites, prayer sites and culturally significant artifacts. The tribe sued the US Army Corps of Engineers after it approved the project.

But an advocacy group says the tribe’s claims are misleading, saying the pipeline “does not cross into the Standing Rock Sioux Tribe’s reservation.”