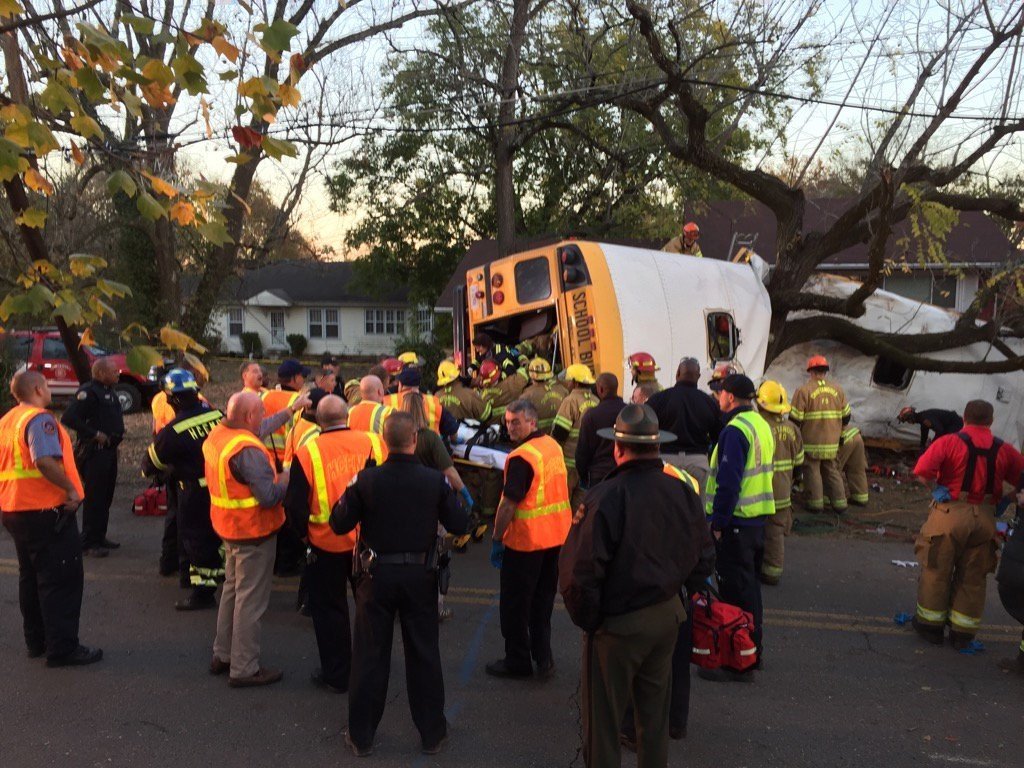 A sixth child has died from injuries sustained in a school bus crash in Chattanooga, Tennessee, police tweeted Wednesday night. The bus was on its way home from school Monday when driver Johnthony Walker swerved off the road and the vehicle, with 37 students on board, plowed into a tree and split apart, according to officials.

No traces of alcohol or drugs were found in the blood of the school bus driver involved in a fatal accident that killed five children, Chattanooga, Tennessee, police Sgt. Austin Garrett said Wednesday.

The accident in which the bus flipped on its side Monday was actually the second time in two months that driver Johnthony Walker crashed a school bus.

Garrett said investigators had obtained warrants for all data devices on the bus and were reviewing video of front, back and side views of the vehicle.

In September, Walker was driving around a blind curve in a residential area when he failed to yield the right of way and sideswiped another car, according to the accident report.

In the earlier crash, which Garrett described as a “minor wreck,” Walker “crossed over into the oncoming traffic lane to maneuver the bus through the curve and struck vehicle #2 in doing so,” the report states. “There were no children in the front rows, and no reports of any injuries. The damage (was) minor to both vehicles.”

Now, investigators are trying to determine why Walker was driving “well above” the speed limit when the bus hit a mailbox, a utility pole and flipped on its side as it struck a tree.

And as 12 children try to recover from the trauma — some with severe head or spinal injuries — the families of five children will have to spend their first Thanksgiving without them. Six remain hospitalized.

“We certainly understand on this week of Thanksgiving (that) we all need to be with our families, appreciating them, thinking about our kids, because there are a lot of families hurting in our city right now,” Mayor Andy Berke told CNN on Wednesday.

Children were ‘just hollering and screaming’

The school bus swerved off Talley Road, plowed into a tree and split apart — just outside Mary Smith’s home.

Smith darted outside her house when she heard the wreck.

“I ain’t never heard nothing like that before in my life,” she told CNN affiliate WKRN. “The wheels were still turning on the bus.”

“They were just hollering and screaming, all of them in a different tone,” she said.

By Wednesday, shock gave way to mourning. Crowds had gathered at the makeshift memorial, the elementary school and church — to process, pray and grieve.

Chief: ‘Driving was reckless and unsafe’

His school bus left Woodmore Elementary School on Monday afternoon with 37 students. It did not make any stops before the crash, NTSB Chairman Christopher A. Hart said.

Hart told reporters Wednesday that investigators were looking into why the bus was not on its designated route at the time of the crash.

The bus was heading down a narrow, winding road well above the speed limit of 30 mph, according to an arrest affidavit for Walker.

“Mr. Walker lost control of the bus and swerved off of the roadway to the right, striking an elevated driveway and mailbox, swerved to the left and began to overturn, striking a telephone pole and a tree,” the affidavit says.

Hart said there had been no fatal crashes on the road before Monday, over the past three years.

The NSTB was having some problem downloading video and data from the cameras and the engine control module on the bus because of damage, Hart said.

The bus company had been operating since 2007 on a “conditional safety rating” from the Federal Motor Carrier Safety Administration, but that was upgraded to “satisfactory” after the unspecified problems were resolved, Hart said.

“We will be exploring what were the deficiencies,” he said.

Chattanooga Police Chief Fred Fletcher told HLN the “driving was reckless and unsafe for conditions at the time.”

The bus did not have seat belts.

Garrett said investigators have not yet interviewed the children on the bus. No one was ejected from the vehicle.

Durham School Services CEO David Duke said in a YouTube statement that the company, which runs the bus service, was cooperating with the federal and local investigations.

“My responsibility now is to look for answers — answers about why this tragedy occurred and answers for how we can make sure that this never, ever happens again,” he said.

“I don’t want to compromise that investigation,” he said. “What I can do is promise that I’m determined, that we’re determined to find out what happened. And that we will offer any support that we can to the families.”

The first lawsuit stemming from the crash was filed by the family of Jamar Boling, 8, who was injured in the accident. The complaint, which alleges that Boling sustained significant physical and psychological injuries, names the driver and Durham School Services.

Grandmother of victim: ‘I ain’t accept it yet’

Of the five children who died, three were fourth-graders, one was a first-grader and one was a kindergartner.

“That was my baby,” she said Wednesday. “I ain’t accept it yet.”

She described Zyaira as a “feisty” little girl.

“Everybody loved her. She’s a good little girl, so sweet and smart.”

Another victim was D’Myunn Brown, 6. His mother had met him at the bus stop each day and so she knew exactly where he sat.

“He was my only child,” Diamond Brown sobbed.

Brown had recently returned home to D’Myunn after serving a five-year prison sentence. D’Myunn was just 1 year old when his mother went away.

McClain remembered the fourth-grader as “a sweet, sweet girl. A little angel here on earth.”

She would have celebrated her 10th birthday next month.

“The family is still going to have a birthday party for her in her honor,” he uncle said.

Zoie’s brother, Zachariah Nash, 8, was badly injured in the crash but is expected to survive, McClain said.

Cor’Dayja Jones, 9 also died in the crash, according to a funeral home.

After the crash, Walker’s mother said she got a phone call from her son, who told her he’d been in a “drastic accident” and tried to explain what had happened before police took his phone away.

“He was trying to get them (children) off the bus — all the bodies were limp,” Gwenevere Cook said. “There was blood everywhere. He has been cooperating with the police. He texted me minutes later saying the kids are dead.”

Cook offered her condolences to the victims’ families and asked for compassion for her son. She said Walker is a respected man and the father of a 3-year-old son. He worked two jobs and had never been in trouble before.

“It is a horrible nightmare,” Cook said. “I feel bad for my son, and I am torn up for the (victims’) family members.”

Questions about the bus company

The company that operated the bus and employed Walker has come under scrutiny.

Durham School Services, a company that transports more than 1 million students daily at schools across the United States, said it was working with police and school officials to investigate.

Neither the city of Chattanooga nor its schools interacts with the company, Berke said. Hamilton County runs the bus system.

“Our entire team at Durham School Services is devastated by the accident yesterday that tragically claimed the lives of Chattanooga students,” the company’s statement said.

In his statement, Duke said, “I can’t fathom the anguish of the parents whose children were involved in this horrific accident and it involved one of my company’s buses.

“Nothing that I can say can take away the pain and the grief for these families. What I can say is that I’m deeply sorry for the children that were taken from their families with so much life before them.”

Hundreds of mourners filled the pews at New Monumental Baptist Church on Tuesday night. They cried and raised their hands in prayer as they sang of how God is in control, and that no matter how bleak the situation, things will get better.

“We love the children of Woodmore with all our hearts,” Hamilton County Interim Superintendent Kirk Kelly said. “We will grieve together and honor our children’s lives.”

A survivor of the crash hobbled to the front of the sanctuary in crutches, bringing the tearful crowd to its feet.

Berke said there has been a wave of donations for the victims, from pizza to toys.

“It’s just been a tremendous outpouring of support,” he said. “Particularly because one of the most unnatural things is to see a child suffer.”