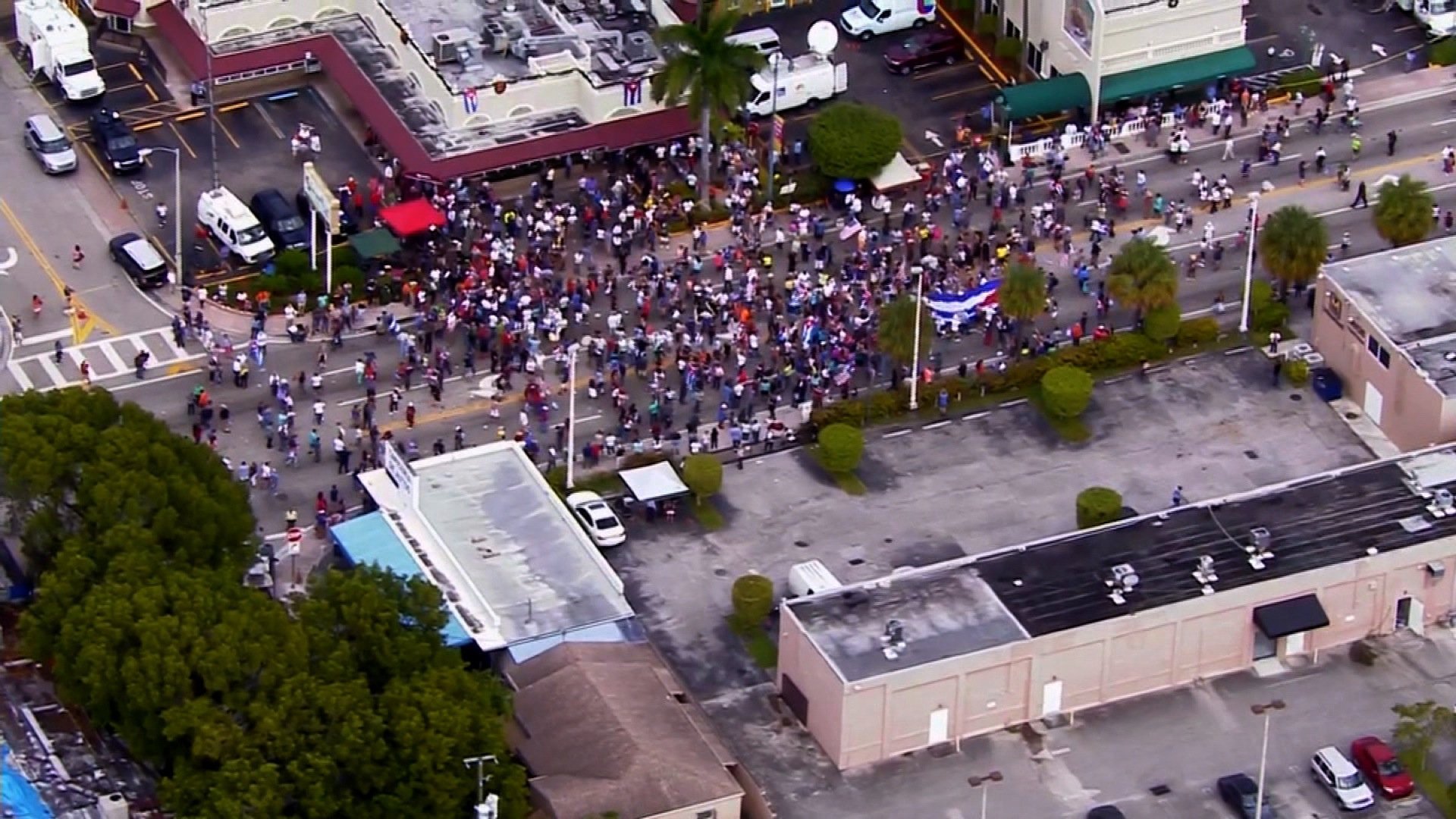 MIAMI (CNN) — News of Fidel Castro’s death was quick to reach Miami, the center of the Cuban exile community, where an outpouring of emotion brought jubilant crowds onto the streets of Little Havana.

Some popped champagne corks, others clanged pots and waved the Cuban flag as they cheered the death of a man who defined the lives of so many Cubans through decades in exile in the United States.

Hundreds gathered outside the neighborhood’s Versailles restaurant, a longtime haunt of the exile community, spilling out on to the street from the sidewalk as they chanted, sang, danced and took smartphone videos of a historic moment.

Others shouted “libertad” or “freedom,” an expression of hope for their compatriots in Cuba.

The party was still going strong at 4 a.m. local time, more than five hours after the news of Castro’s death was first announced on Cuban TV.

Passing motorists added to the cacophony, honking their horns and flashing their headlights in a show of support as they drove down Calle Ocho in the heart of Little Havana.

By Saturday morning, a new wave of celebrations in Little Havana had begun as people cheered and waved flags.

‘Everybody here hopes for a free Cuba soon’

“The hope is that not just because Fidel died, but also hopefully it opens up the people in Cuba a little bit more to go against what’s happening there.”

Many families have suffered decades of separation, he said, with those who left unable to return.

Another Cuban-American, born in Miami, told CNN he saw this as a “great moment, not to celebrate the death of somebody but to celebrate freedom,” particularly for the many political prisoners still held in Cuba.

“I would love to go to Cuba, a free Cuba. Right now Cuba is not free. And so the hope is — and I think the celebrations here show — everybody here hopes for a free Cuba soon and for human rights on the island to come to pass.”

Some Cuban exiles have waited years to mark this moment, with many false alarms along the way.

He said he hoped a “free and democratic Cuba” would emerge but cautioned that Fidel’s younger brother, President Raul Castro, remained in charge of “one of the world’s most repressive governments.”

Gimenez urged those who chose to demonstrate to do so peacefully.

Those out on the streets included Cuban-Americans of all ages, including some who first came from Cuba in 1959 after Castro’s revolutionaries ousted dictator Fulgencio Batista.

Others left in the following decades, many joining their fellow exiles in Miami and elsewhere in the United States.

More than 260,000 Cubans left in a US-organized airlift between 1965 and 1973. In 1980, Castro let another 125,000 leave in the chaotic Mariel boatlift. Among them were criminals released from Cuban jails who brought a violent crime wave to Florida. At other times, desperate Cubans fled the island nation in makeshift boats across the treacherous Straits of Florida. Thousands died from drowning or exposure to the brutal Caribbean sun.

Few who left back in 1959 would have believed Fidel Castro would hang on to power for so long, only ceding the presidency to his brother Raul in recent years.

Speaking alongside other lawmakers from Florida, Rep. Mario Diaz-Balart, who is Cuban-American, said, “Today is a reminder of how inevitable it is that the Castro dictatorship will soon enough be a nightmare of the past.”

Castro lived long enough to see a historic thaw in relations between Cuba and the United States. The two nations re-established diplomatic relations in July 2015, and President Barack Obama visited the island this year.

That thaw was welcomed particularly by younger Cuban-Americans but was more problematic for many of the older generation, who have supported strict US sanctions for decades as a means to pressure the repressive Cuban government.