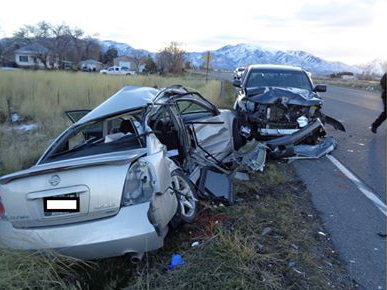 WEBER COUNTY, Utah — A 19-year-old woman is in critical condition after a crash in Weber County early Monday morning.

Weber County Sheriff’s Office stated Tuesday that the crash occurred around 7:30 a.m. Monday as the woman was driving east on 12th Street near 4300 West.

The woman’s vehicle drifted onto the right shoulder of the road, and she over-corrected and was then struck broadside by a truck traveling westbound. The impact caused the woman’s car to begin to spin.

The woman was taken to a local hospital with critical injuries. The driver of the truck, a 31-year-old male, suffered minor injuries and was released at the scene.

Police are still investigating the cause of the crash, and they said so far no citations have been issued.

“The Weber County Sheriff’s Office wants to remind drivers to be attentive at all times while driving,” the sheriff’s office stated. “We want to wish a fast and speedy recovery to both involved.”