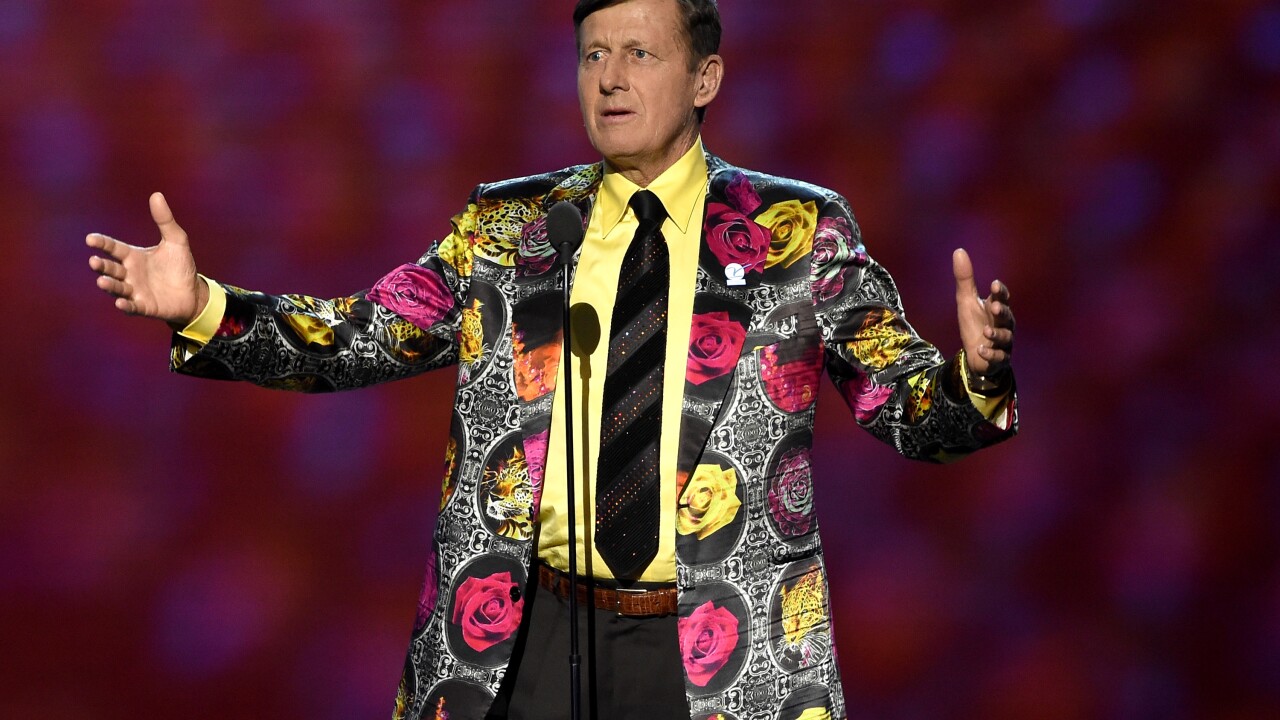 (CNN) — The suits and ties were so loud, at times they were screaming. But Craig Sager wore them so well.

Sager, the longtime Turner Sports sideline reporter best known for his colorful — and at times fluorescent — wardrobe, has passed away after battling acute myeloid leukemia. He was 65.

Sager died just days after he was inducted into the Sports Broadcasting Hall of Fame.

He is survived by his wife, Stacy, and five children: Kacy, Craig Jr., Krista, Riley and Ryan.

“Craig Sager was a beloved member of the Turner family for more than three decades and he has been a true inspiration to all of us. There will never be another Craig Sager. His incredible talent, tireless work ethic and commitment to his craft took him all over the world covering sports,” Turner President David Levy said in a statement.

“While he will be remembered fondly for his colorful attire and the TNT sideline interviews he conducted with NBA coaches and players, it’s the determination, grace and will to live he displayed during his battle with cancer that will be his lasting impact. Our thoughts and prayers are with Craig’s wife, Stacy, and the entire Sager family during this difficult time. We will forever be Sager Strong.”

Social media was flooded Thursday afternoon with tributes to Sager, many of them from athletes he had interviewed.

“Craig Sager brought so much enthusiasm to the NBA game. But his fight to the end is what really impressed me. RIP to an inspiring man,” said former NBA great Scottie Pippen on Twitter.

“Words can’t explain how honored, humbled, and excited I was to be interviewed by a legend like you at this moment,” said reigning NBA Rookie of the Year Karl-Anthony Towns on Instagram. “The sports world will never be the same without you.”

If someone didn’t know Sager by name, they likely knew him by his wardrobe.

With his bold, colorful and sometimes downright crazy combinations, seemingly nothing was off limits for Sager. He donned velvet, plaid, checkered, bright pink or deep purple. He wore ties with polka dots and flowers. The list of his sartorial flourishes was endless.

Charles Barkley once said that Sager looked like a pimp. During an interview, Kevin Garnett told Sager to go home and burn the suit — including the shoes and socks — he was wearing.

“There’s not any part I can keep?” Sager asked.

Sager’s approach at life matched his attire. It was all about elevating every moment.

But he also was known for something else. He spent more than 20 years as an NBA courtside reporter, and he was good at his job.

“He’s going to get the right question to the right person, and you can’t get around it,” former NBA player and current Turner Sports studio analyst Kenny Smith said. “No matter who you are, what stature you are in the NBA, from rookie to perennial All-Star, he’s going to make you answer the question.”

Colorful start to his career

Incredibly, Sager’s life had more color than his suits.

Born in 1951 in Batavia, Illinois, Sager was the Willie the Wildcat football mascot when he attended nearby Northwestern. After graduation, he went to Tampa in 1974 to apply for a job as a weatherman at a small station. To stick out at the audition, Sager purchased a blue, white and yellow seersucker suit from a Goodwill store. Sager got the job, but he was told to get rid of the suit. It clashed on TV.

That same year, Sager started working in sports. On April 8, 1974, when Hank Aaron broke Babe Ruth’s all-time home run record, there was Sager, who was working for an Atlanta Braves affiliate radio station in Sarasota, Florida, for $95 a week, among the people mobbing Aaron when he reached home plate.

His interviews with Aaron are in the National Baseball Hall of Fame in Cooperstown, New York.

“I don’t like to think I peaked at 22, but it would be hard to top a memory like that,” Sager said.

But there was more. A lot more.

In 1977, Sager slept in a stall next to Seattle Slew before the horse won the Triple Crown.

When Morganna Roberts, the entertainer known as Morganna the Kissing Bandit, was arrested for running onto the field at the MLB All-Star Game in 1979, Sager bailed her out. In return, she gave him her supersized bra.

While he was broadcasting Kansas City Royals games in 1981, Sager got a call from Ted Turner. Turner had recently launched CNN, and he wanted Sager to broadcast shows on baseball and basketball. Sager accepted and became CNN Employee No. 343.

Sager started doing sideline reporting for TNT in 1990. It was then that the colorful jackets and suits became his hallmark. He tried not to wear the same jacket-and-tie combination twice. He also owned more than 100 pairs of dress shoes.

“It’s not just the style. The color scheme is dangerous,” San Antonio Spurs head coach Gregg Popovich once told HBO’s Real Sports. “You have to be very careful — as you look at him, it can’t be too quick. It’s got to be slow, so your eyes can adjust.”

Popovich is notorious for loathing on-court interviews during games, saying it takes him away from his team. But when it’s Sager “that makes it livable,” he said.

Over the years Sager covered almost everything in sports, from college basketball and football to baseball’s World Series and the summer Olympics.

Sager was working a San Antonio Spurs-Dallas Mavericks game in Dallas that night. But the reporter, who was known for being fit, didn’t feel right. He was unusually tired. After the game, Sager flagged down the Mavericks team doctor, who gave him a check-up and told him to go to the emergency room immediately.

Sager received a bone marrow transplant from his son, Craig Sager, Jr. During his father’s absence, Sager Jr. took to the sidelines during the NBA playoffs to honor his dad.

“I gotta tell ya, you did a great job but I’d rather have your dad standing here,” Popovich said. “Craig, we miss you. You’ve been an important part of all of this for a long time. We want your fanny back on the court.”

Sager missed 11 months before returning to broadcasting. When he worked a Spurs game again, Popovich once again showed his softer side.

“I can honestly tell you, this is the first time I’ve enjoyed doing this ridiculous interview we’re required to do,” Popovich said to Sager while on the air. “It’s ’cause you’re here and you’re back with us. Welcome back, baby.”

Sager and Popovich embraced, with Sager saying he had been “in the hospital for months hoping to do this again.”

Popovich — in the best way possible — then lovingly brought it back to business.

“Now ask me a couple of inane questions,” the coach said.

But it didn’t last. In March 2015, the cancer returned, and Sager underwent a second bone marrow transplant, once again through his son Craig Jr.

A year later, this March, Sager said on HBO’s “Real Sports” that he was no longer in remission.

“I’ve already had two stem cell transplants,” Sager said. “Very rarely does somebody have a third, so I have to maintain my strength so I can go through this.”

“I haven’t won the battle,” he said. “It’s not over yet. But I haven’t lost it either. There have been some victories and some setbacks, but I still have to fight it, and I still have a lot of work to do.”

And work he did.

Sager continued to work for Turner Sports, including the historic national championship game between Villanova and North Carolina that aired on TBS. At that game, Sager, who was receiving treatment at the time, scored an interview that no one ever gets: Michael Jordan.

“It’s always good to see you,” Jordan said to Sager.

In July, while accepting the Jimmy V Perseverance Award at the ESPY’s, Sager gave a moving speech about his cancer battle, stressing he would “never give up.”

“I will continue to keep fighting sucking the marrow out of life as life sucks the marrow out of me,” Sager said, wearing a yellow shirt, a floral jacket, and black sparkly tie. “I will live my life full of love and full of fun. It’s the only way I know how.”

On August 31, with the help of an anonymous donor, Sager underwent his third bone marrow and stem cell transplant in a three-year span. Having three transplants is extremely rare, but Sager hoped the third time would be the charm.

By his side was Barkley, there against doctor’s orders, as he recently had hip replacement surgery and wasn’t cleared to travel.

And colleagues, players, coaches and fans loved him back.

“He’s just been such a genuine person who really does love the NBA and he loves the game,” Popovich said to HBO’s Real Sports. “And it comes through. And you know that even though he does what he does … fashion-wise, it’s part of the shtick. But his questions are always sensible, they’re answerable and he does it with fun. He does it with humor.”