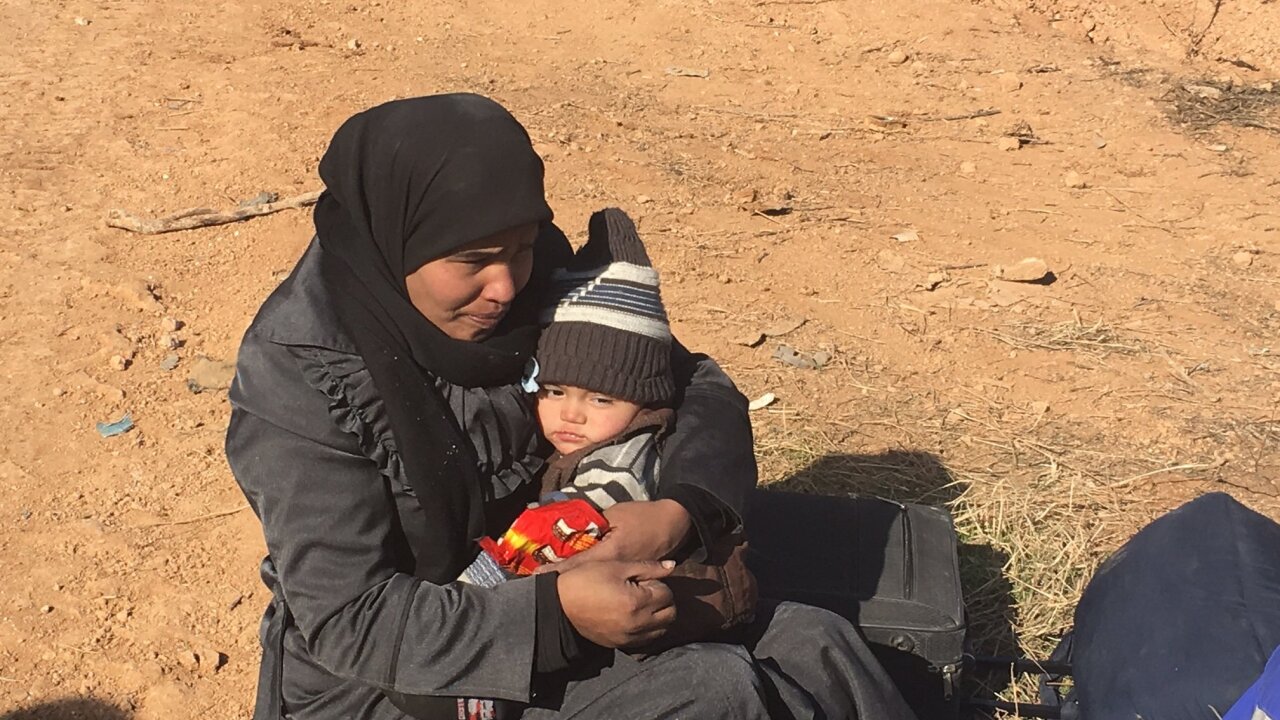 As the Syrian army continues to fight its way through the old city of Aleppo, the tide of those fleeing for their lives has become a raging flood, an avalanche. Picture: Maysaloon crossing this December 8th, 2016 where citizens are evacuating E. Aleppo.

The exodus of thousands of people from besieged areas was set to begin this weekend under a new complex people-swap deal. But the plan was put on hold Sunday after a number of buses were set on fire.

Hours later, the first “limited evacuations” began from eastern Aleppo and the towns of Kefraya and Foua, United Nations humanitarian adviser Jan Egeland said on Twitter. Thousands more are waiting to be evacuated, he added.

Shortly after midnight, Robert Mardini of the International Committee of the Red Cross said five buses and one ambulance had just left “dark and cold” eastern Aleppo.

The agreement, struck Saturday, was to give safe passage to those loyal to Syrian President Bashar al-Assad’s regime, including Iranian militia groups, from areas held or besieged by rebels, the Aleppo Media Center activist group said.

It was a new demand in exchange for the evacuation of civilians, rebels and others loyal to the opposition from eastern Aleppo, now almost entirely in government control.

What began as a straightforward evacuation agreement has become a complicated, three-stage deal involving Aleppo and four other cities. Some 4,000 people were to be evacuated from Kefraya and Foua, while others were also to come from Madaya and Zabadani.

Then, on Sunday, buses in neighboring province of Idlib were set ablaze as they made their way to Kefraya and Foua, said Syrian state media and the Syrian Observatory for Human Rights, a UK-based monitoring group.

The delay left thousands of people in limbo. Many had been sleeping on the streets and in bombed-out buildings in subfreezing temperatures since Friday, when earlier evacuations were interrupted. Activist Monther Etaky in eastern Aleppo posted a video on Twitter showing dozens of weary and injured people, saying they had been waiting to be evacuated since 6 a.m. “Civilians are not negotiations tool(s),” he wrote in his post.

Some resistance to the deal was expected. It requires the cooperation of opposing parties in the Syrian civil war that has raged for more than five years.

Winter will be ‘a killer’

The Norwegian Refugee Council is assisting people who have fled eastern Aleppo, many of whom slept outdoors as temperatures plunged below zero. The council is hosting them in camps to the north of the city.

“Our major concern at this point is — not only in Aleppo but across the country, where there are people being displaced by this fighting — is that they’re living in the open, they’re exposed to the elements,” Thomas White, the organization’s Syria Response Director, told CNN’s Cyril Vanier. “And it’s cold right now, and this winter in northern Syria will be a killer.”

But for many, being taken to Idlib is moving from one war zone to another. Idlib is widely expected to be the regime’s next target, and the evacuations are effectively moving rebels to one containable zone.

As many as 9,000 people had been evacuated from eastern Aleppo in nine convoys on Thursday and Friday, but the efforts came to a halt Friday after some evacuees were found to be transporting weapons and advanced communication devices, Syrian state news agency SANA said.

But rebels claimed that Iranian and other Shia militia groups loyal to Assad made fresh demands to have regime loyalists freed from other rebel-held areas.

“We would like to highlight that the Iranians are the main reason for delays and obstacles,” said Osama Abazid from the Free Syrian Army rebel alliance.

“We call upon you to spare no effort to ensure that attacks on convoys are prevented at all costs.”

‘All my children are gone’

For those staying life is only getting more grim. The government’s grip on eastern Aleppo is now so tight there is little left for civilians.

The Syrian regime was accused of continuing its destructive airstrikes this week in violation of earlier ceasefires.

A harrowing video broadcast by ITV’s Channel 4 of what is believed to be eastern Aleppo’s last hospital shows a child siting on a bed, covered in dust and blood, visibly traumatized, following an airstrike.

A woman, also bloodied and white with dust, wails in pain, saying she lost all her children in a strike in their home as they slept, .

A boy who appears to be a young teenager is in tears and shock as he cradles the body of his 1-month old brother, who suffocated in a strike. Two children are escorted around the hospital to look for their parents, hoping they are not the latest to be orphaned.

Aleppo resident Fatemah Alabed, the mother of 7-year-old Bana, whose Twitter account has become one of the continued narratives of Aleppo, addressed Turkey’s President and foreign minister in a tweet Sunday.

“Please please please make this ceasefire work and get us out now. We are so tired,” she said.

Vote on resolution scheduled for Monday

The UN Security Council is scheduled to meet Monday to vote on a proposal brought by France that would redeploy UN staff to Aleppo to monitor and report on the evacuation of civilians. The proposal calls for safe evacuations, “immediate and unconditional” access to humanitarian aid, and protection of medical facilities and personnel.

The Security Council has come under criticism, having failed to find a political solution to Syria’s brutal war that has killed at least 400,000 people and to even agree on days-long ceasefires.

Russia, which has supported Assad with airstrikes since September 2015, has used its veto power as a permanent member of the Security Council six times to shoot down UN resolutions on the conflict, while China has vetoed five of those six.

Turkish President Recep Tayyip Erdogan spoke by phone with Russian President Vladimir Putin about the latest developments in Aleppo, according to Turkey’s official news agency Anadolu. The two said issues around evacuations should be solved as soon as possible. They also discussed efforts to send humanitarian aid into Aleppo and to reach a political solution in the country. No specific details were released.

If the regime does take control of the key city, it would mark a turning point in the war, putting the regime back in charge of all five major cities in Syria and making a political opposition far less likely to succeed.