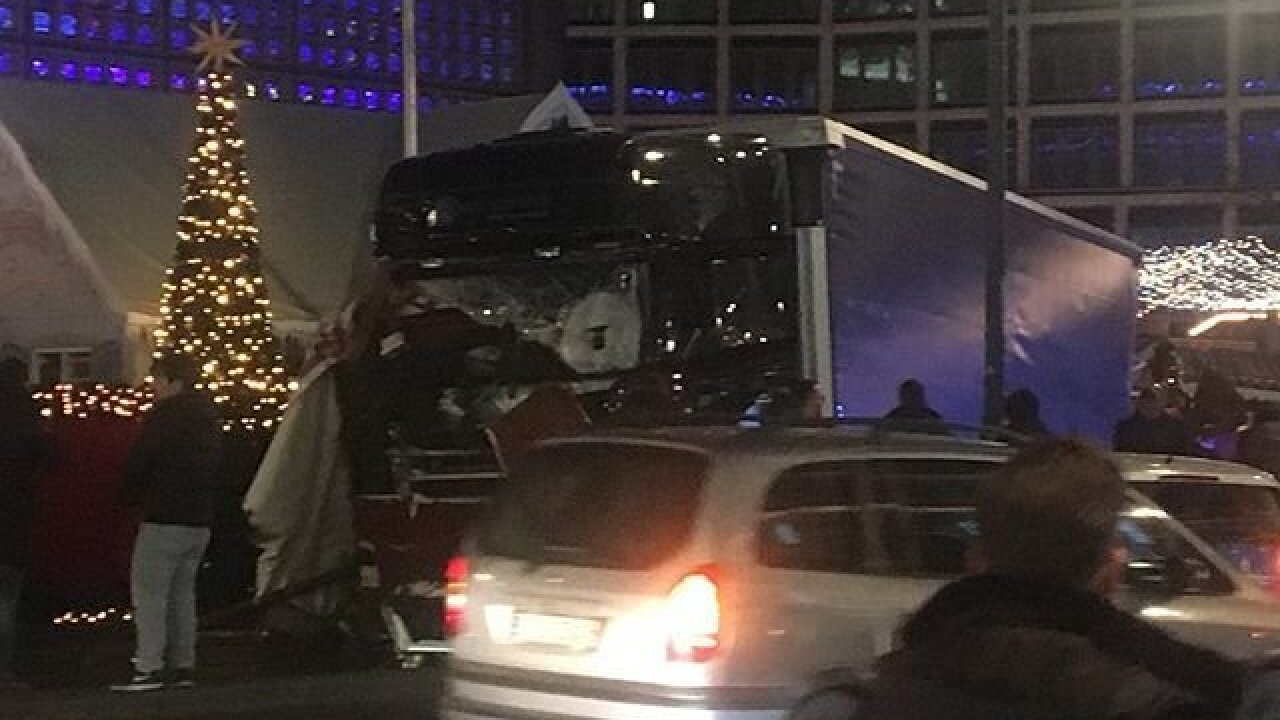 truck came barreling through the christmas market. if i hadn’t stopped to check my phone, i would have been hit. everyone went scurrying. so many people hurt.

BERLIN – The suspected driver in the Christmas market crash has been apprehended in an ongoing operation, according to a Berlin police spokesperson. No other details were immediately available.

A truck ran into a Christmas market Monday evening in a major public square in Berlin, killing nine people and injuring at least 50 others, police said.

A police spokesman described it as a “severe incident.”

“A truck just ran over a sidewalk at #Breitscheidplatz Our colleague report multiple injuries. more to follow,” Berlin police tweeted.

One witness Emma Rushton tweeted: “People crushed. I am safe. I am safe.”

The incident happened in Breitscheidplatz in the western part of central Berlin.

Rushton, who was in the market when the truck came through, told CNN that the truck didn’t slow down.

“We saw at least 10 people” injured and lying on the ground, she said.

Rushton said the truck was traveling about 40 mph through a crowded pedestrian area that had no roads.

“There’s no way it was an accident,” Rushton told CNN.

Police could not confirm whether the incident was related to terror and had no information on the driver.

Video showed the vehicle was a tractor-trailer.

Jan Hollitzer, deputy editor-in-chief of Berliner Morgenpost, a Berlin newspaper, said he saw people underneath the truck when it came to a stop.

The square is cordoned off and a man was seen on the ground with a blanket over him.

German officials have been concerned about security around Christmas markets, which are the main place for Christmas shopping for many Germans and tourists.

In November, the U.S. Department of State alerted U.S. citizens to the heightened risk of terrorist attacks throughout Europe, especially during the holiday season.

The alert, which encouraged citizens to be cautious at the holiday festivals, expires on February 20.

Julian Reichelt, editor-in-chief at Bild, a German tabloid newspaper, said the market would be busy every night of the week leading up to Christmas.

“It looks like something that was adapted by Nice,” Reichelt said, referring to the Bastille Day truck attack in Nice, France, that left at least 80 people dead and more than 400 injured.

One witness said the truck had a Polish license plate, according to Reichelt.