Tree falls on wedding party during photoshoot, one killed 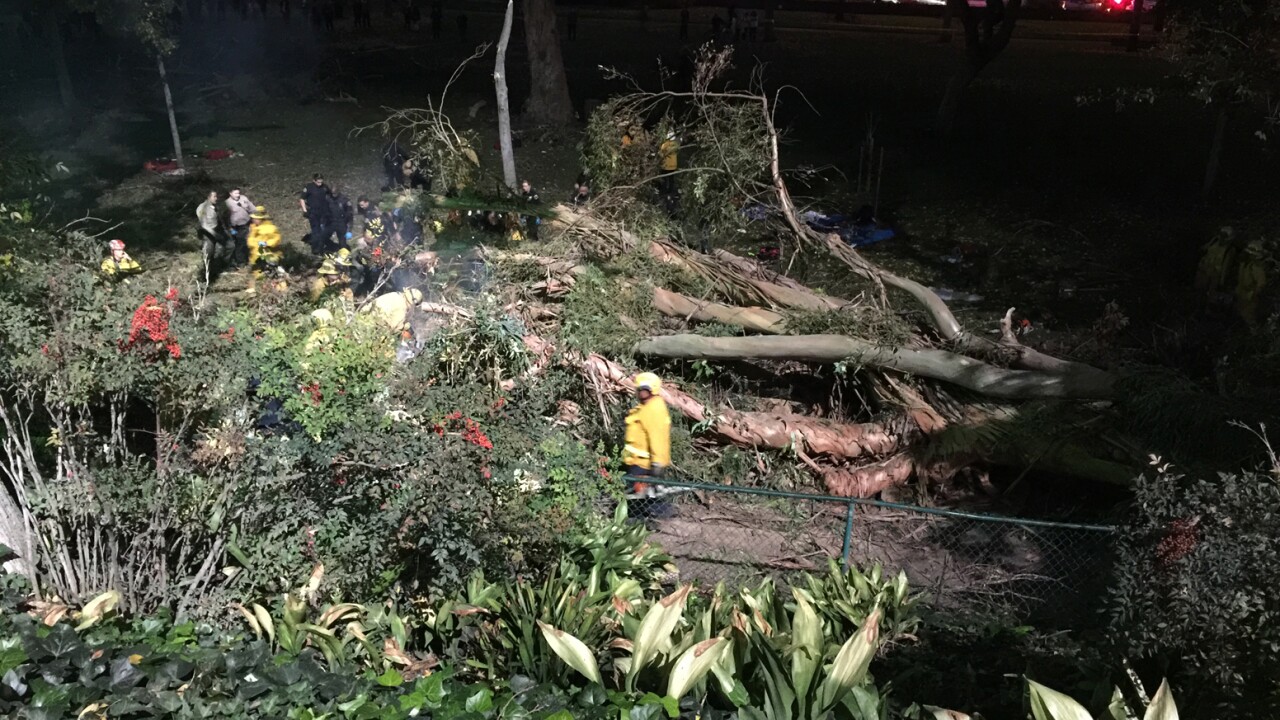 LOS ANGELES -- A woman was killed and five people were injured after a large tree fell on a wedding party that was taking photos at a Whittier park Saturday evening, according to the Los Angeles County Fire Department.

Several people were injured after a tree fell on a wedding party in Whittier on Dec. 17, 2016. (Credit: KTLA)

One witness said the tree split in two and landed on several people.

Witnesses told KTLA the wedding party was taking photos when the eucalyptus tree came crashing down. People who were attending a nearby party came rushing over to help.

Some victims were able to free themselves or with help before the fire department arrived, but six people had to be cut out by responding firefighters, officials said.

One of those victims, described as an older woman, died on her way to the hospital, according to the fire department. Her age and identity have not been released.

Another victim, a 4-year-old girl, is in critical condition and received head trauma, according to the Whittier Police Department. The rest of the victims suffered minor injuries and were taken to area hospitals.

Several search dogs were being used to make sure no other victims were left trapped underneath the debris.

About 100 firefighters responded to the incident, the Los Angeles Times reported.

Firefighters were using chainsaws to cut branches of a tree that fell on a wedding party on Dec. 17, 2016. (Credit: KTLA)

The tree appears to be about 60-feet tall. A neighbor told KTLA that a similar tree fell in the area in the last year.

The park, which had been busy before the incident, was closed during the clean up and investigation.

Anahi Vazquez was taking photos with her family when the tree came down.

“We just heard something crack, like, really hard, and people were yelling,” she said.

Vazquez added that a baby girl was stuck under the rubble and Vazquez’s uncle tried to pull her out.

Witness Gilbert Duran said on Facebook that he was attending a quinceañera party in the park when the tree fell.

He said he and some friends were under the tree taking photographs shortly before it fell, but moved to a different location for better light.

That's when the wedding party moved under the tree, he said.

"We walk away and five minutes later this thing collapses on a whole wedding party," he said on a video on Facebook. "I just seen a bunch of kids, little kids... they were running for their life and this thing just fell on top of them. I watched them go flat."

City officials will work to determine what caused the tree to fall.

CNN Wire contributed to this story.