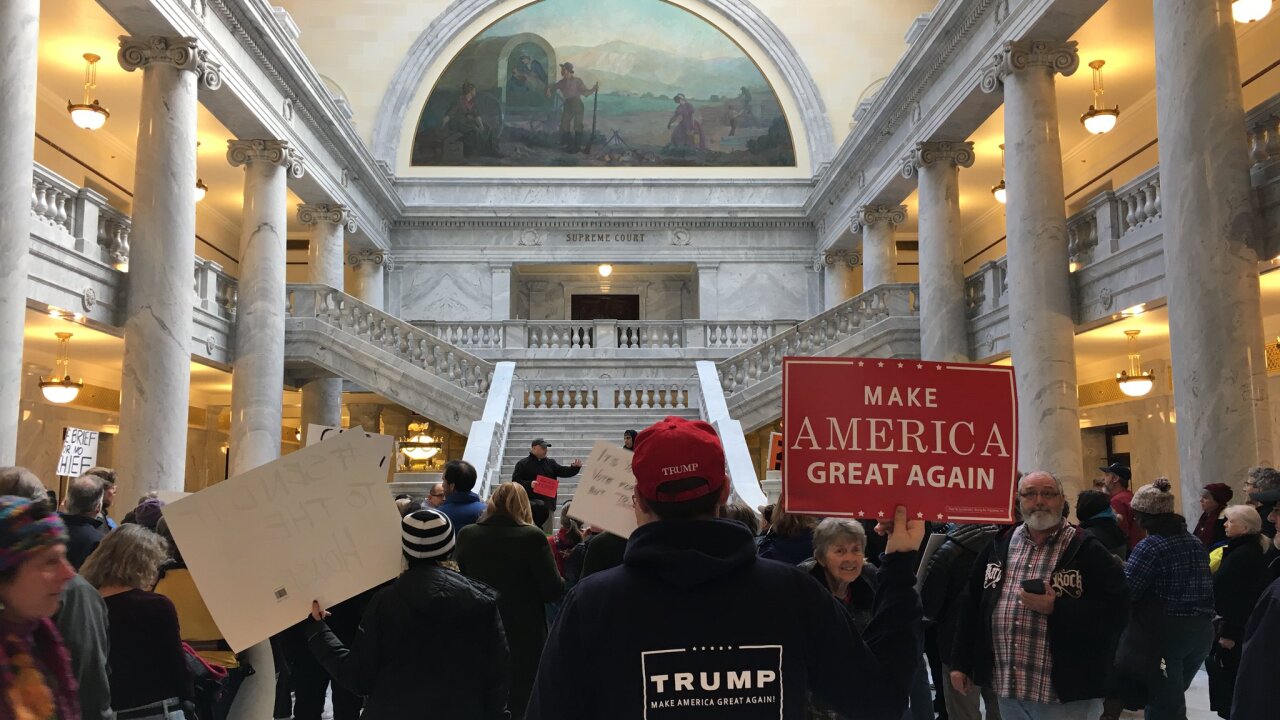 A lone supporter of Donald Trump holds up a sign at a protest against the President-elect on the day Utah’s Electoral College cast its votes. (Photo by Ben Winslow, FOX 13 News)

It was part of a morning of demonstrations at the Capitol, as protesters pleaded with Electors to break with tradition -- and the law -- and vote Trump. About 150 people crowded into the rotunda to demonstrate against the President-elect. As the Electors cast their ballots, people spilled out into the hallways and began shouting.

A lone Donald Trump supporter holds up a sign as demonstrators protest the Electoral College vote in favor of the President-elect at the Utah State Capitol on Monday. (Photo by Ben Winslow, FOX 13 News)

"Zeig Heil!" an anti-Trump demonstrator shouted just after the votes were cast, mocking the Electoral College.

But the outcome was not expected to change. Under Utah law, if an Elector breaks with the winner then the political party (in this case, the Utah GOP) would immediately replace them. Still, it was disappointing for the demonstrators.

"Shame on them! Shame on them! There's a couple of women on there and they should be thinking about women's rights and how he's basically depicted women," said Noor Ul-Hasan. "Shame on these people!"

Peter Greathouse, one of Utah's six Electors, said there was a lot of pressure to vote against Trump.

"I received hundreds of letters, emails, phone calls, Facebook messages all asking me to change my vote," he said. "There was one or two asking me to support Donald Trump, but most of them were asking me to vote for somebody other than Donald Trump."

Elector Cherilyn Eager said if demonstrators disagree with the process they can work to change that.

"I certainly hope that it doesn't move in the direction of a national popular vote, because smaller states like Utah need to be able to have that equal chance of getting their voices heard. We don't want it to be decided from Los Angeles, Chicago, New York City or Miami," she said. "We want Salt Lake City to have a piece of it."

So this is a thing I just did...4 yrs ago 5 people showed up. This time was a little different. I ❤️our country. 🇺🇸 #ElectoralCollege pic.twitter.com/idEEfWYoQi