Berlin Christmas market attacker could be at large, authorities admit 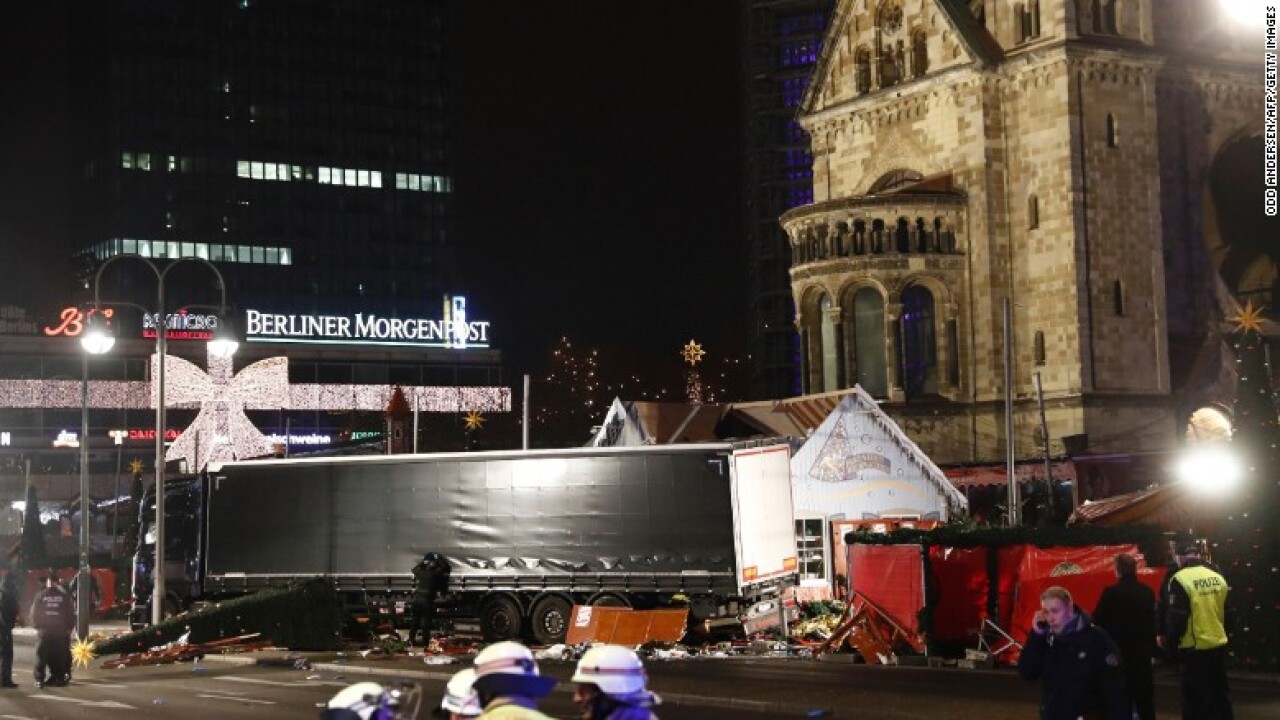 An asylum seeker detained by police after a large truck was rammed into a Berlin Christmas market may not have been the driver, German authorities said Tuesday, leading to fears that the attacker could still be at large.

Berlin Police President Klaus Kandt said that officials could not be certain that the man in custody — who was picked up about a mile away from where 12 people were killed and 48 others injured — was responsible for the attack on Monday evening.

German authorities are investigating the incident as a terror attack.

Moments before Kandt spoke, German Interior Minister Thomas De Maiziere said that the man detained by police had denied any involvement in the attack.

The man was “probably from Pakistan,” De Maiziere said, adding he had entered the country on December 31, 2015, and that his application for asylum had stalled.

Berlin police have called on the public to remain alert, as confusion swirled over who might have been behind the wheel in the attack.

“We possibly need to assume that we have not arrested the right one,” General Prosecutor at Germany’s Federal Court of Justice Peter Frank told journalists Tuesday.

Asked whether the driver might still be at large, President of the Federal Criminal Office Holger Münch at the same press conference said only that authorities had one man in custody and that they were “looking in all directions” for any other suspects.

He also said a weapon believed to have been used in the attack had not yet been found.

One German intelligence official told CNN that security services were concerned that the attacker was still at large and dangerous.

Berlin police said that the truck, owned by a Polish company, “was steered deliberately into the crowd.” It was carrying 25 tons of steel at the time, the vehicle’s owner said.

Ariel Zurawski, owner of the truck company, told CNN affiliate TVN 24 the vehicle may have been hijacked, as his cousin — the truck’s regular driver — couldn’t have been behind the wheel.

Berlin police corroborated the information, saying the man found dead was a Polish citizen and was not driving during the incident.

De Maiziere said that the man found in the truck appeared to have been shot dead.

Zurawski added that the driver was happy to be finishing his route from Italy to Berlin and was looking forward to returning to Poland after one last leg to Denmark.

“He was asking if he should be back home by Thursday night because he still needed to buy a Christmas gift for his wife,” he said.

German Chancellor Angela Merkel visited the scene of the attack on Tuesday afternoon, saying earlier it would be “especially disgusting” if anyone in the attack had been given asylum.

Dressed in black and making her first public comments on the attack late Tuesday morning, she called for unity in the country.

“I know that it would be especially hard to bear for us if it was to be confirmed that a person (who) committed this act … was given protection and asylum in Germany,” Merkel said.

“This is a very difficult day. I, like millions of people in Germany, am horrified and deeply sad about what happened yesterday in Berlin.”

Monday’s attack could cause further political upheaval for Merkel, who has come under criticism over her government’s generous acceptance of refugees. Germany has taken in more than 890,000 asylum seekers in the past year, a marked difference to other European nations.

But a backlash has been growing, fueled in part by Islamist terror attacks in Germany and across the continent.

Before the attack on Monday evening it was a quintessential German Christmas scene at Breitscheidplatz: Trees strung with lights, vendors serving candied fruit and waffles, the smell of gluhwein — German mulled wine — wafting through the cold December air.

American Shandana Durrani was at the market, at the foot of the Keiser Wilhelm Memorial Church, and had stopped to reply to a text message when the truck rammed into the crowd at around 8 pm.

She was lucky to have stopped, she said, as the truck mounted the curb, mowing people and stalls down just 20 feet in front of her, sending everyone “running, scurrying, screaming.”

“I heard some popping and thought maybe there was a guy with a gun,” she told CNN.

She said that the it looked as if the driver had just mounted the curb and lost control, and that the whole thing probably lasted a mere 10 seconds.

“It probably didn’t last very long, but it felt like it was in slow motion (as I ) tried to get away from it.”

De Maizier said that Christmas markets would be closed for a day of mourning on Tuesday. “But to cancel them would be wrong,” he said, adding they would hopefully reopen the following day.

Münch, of the Federal Criminal Office, said that authorities had assessed the likelihood of an attack at Christmas markets recently.

The attack bears resemblance to one in Nice, France, in July, when a truck rammed into a crowd gathered to see Bastille Day fireworks, killing 86 and injuring more than 200 people.

Terror groups including ISIS and a branch of Al Qaeda have encouraged their followers to use vehicles to stage attacks.

But no one has so far claimed responsibility for Monday’s attack.

Both the US and UK governments had warned their citizens of potential security threats in Germany.

The US had issued a blanket travel warning for Europe, saying there was “credible information (which) indicates terrorist groups continue plotting possible attacks.”