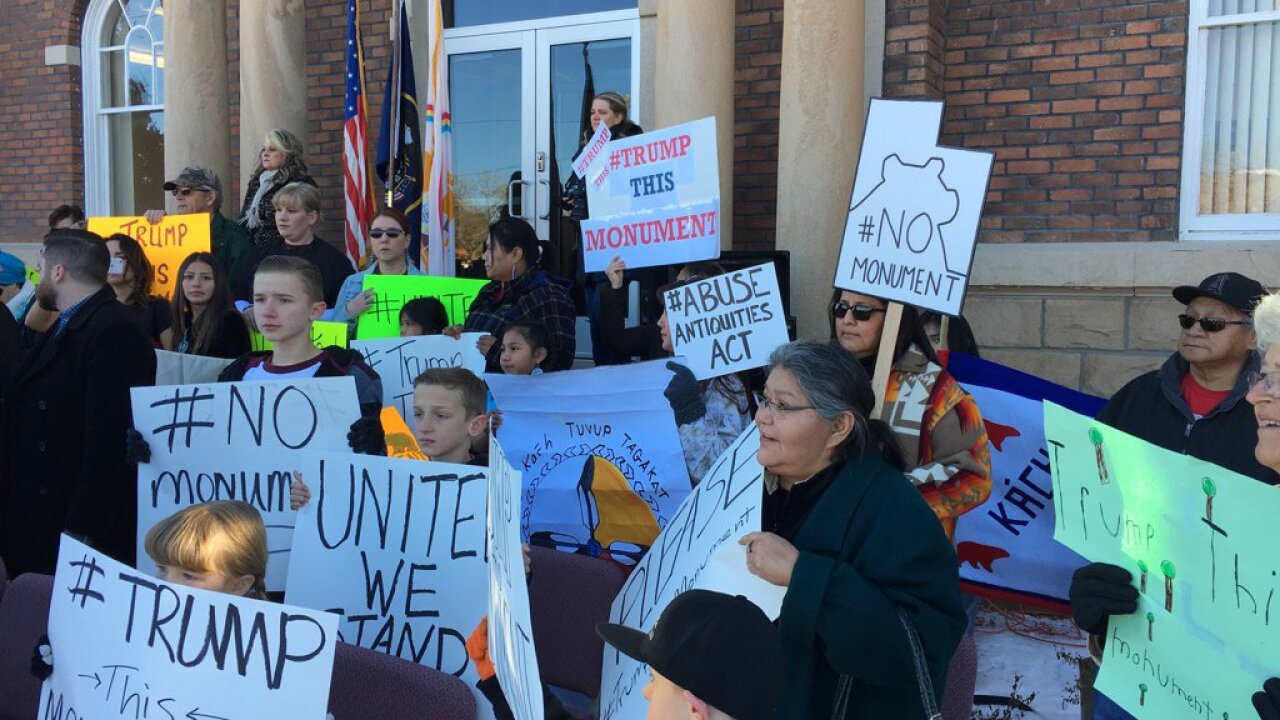 BEARS EARS NATIONAL MONUMENT -- The canyon is eerily quiet and the blue sky is a stark contrast to the red rock.

On a rock face, ancient petroglyphs tell the story of a people long gone. Across a wash, the remains of a dwelling.

This is part of the massive new national monument designated by President Obama on Wednesday, setting aside 1.3 million acres of land as the Bears Ears National Monument. The proclamation has earned the president both praise and scorn.

"This area is so rich with archaeology," said Marcia Simonis with the group Friends of Cedar Mesa. "This area is so important to the native people that once called this home."

Simonis and Vaughn Hadenfelt, a local guide, took FOX 13 into a portion of the newly designated Bears Ears National Monument on Thursday. Hadenfelt escorted Interior Secretary Sally Jewell into the area when she visited earlier this year leading up to the monument designation.

A Navajo woman speaks against the Bears Ears National Monument designation at a protest in Monticello. (Photo by Ben Winslow, FOX 13 News)

While some cheer the monument, others are protesting it. On Thursday, several hundred San Juan County residents gathered outside the county offices in a demonstration against the monument designation. They blasted the monument as an overreach of presidential power and accused the president of abusing the Antiquities Act.

Some of Utah's elected leaders accused President Obama of catering to environmental groups and out-of-state interests, ignoring the input of locals directly affected by a national monument.

"They continue to ignore us," Rep. Mike Noel, R-Kanab, told the crowd to cheers. "But they will not ignore us in the future!"

Sporting signs that read "Trump this monument," many San Juan County residents expressed hope that President-elect Donald Trump would undo the monument once he took office, or at least shrink its borders.

"We're very hopeful the President-elect will be able to undo it and many of the things we researched give us that hope," San Juan County Commissioner Bruce Adams told FOX 13.

Standing in the crowd, rancher Sandy Johnson looked at a map of the Bears Ears National Monument boundary and pointed out where his property is. It's inside the western boundary.

"It took everything I had," he said.

Johnson said he did not know if the new monument meant that he could continue to graze his cattle on the land, or if his water rights were affected.

"We just hope Donald Trump can do something," he told FOX 13. "Repeal this thing."

Barring that, Utah's elected officials certainly planned a fight over the monument. At Thursday's rally, they spoke one-after-another, assuring angry residents that they would not stand for the monument. Utah Attorney General Sean Reyes has already threatened a lawsuit; Rep. Jason Chaffetz fired off letters demanding information on the decision making on Bears Ears, hinting at an investigation.

The Interior Department has claimed that existing energy development leases and grazing rights will be allowed in the monument. Yellowman said he hoped the monument would stand.

"Why are you after it? Is it just because the native have a voice in it now?" he said of monument critics. "Is it why you're doing that?"

A Native American dwelling believed to be over 1,000 years old (center) inside the Bears Ears National Monument. (Photo by Ben Winslow, FOX 13 News)