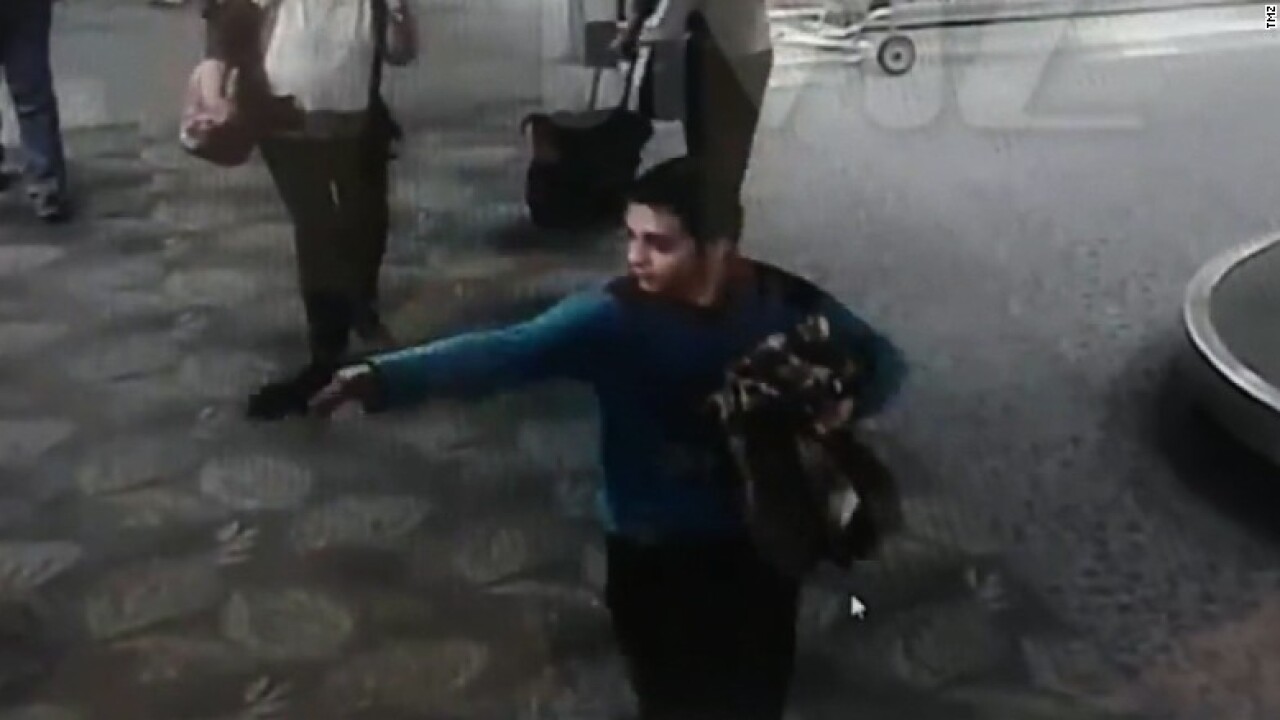 WARNING: The video below shows the moments the gunman in Fort Lauderdale opened fire. Viewer discretion is advised.

(CNN) — The gunman walks through the baggage claim area at Fort Lauderdale-Hollywood International Airport, just steps behind a man and two boys. As coolly as one might check a cell phone for messages, he pulls a handgun from his waistband and begins firing, then quickly runs off camera.

Security footage obtained by TMZ shows the seconds before and after a gunman police say was Esteban Santiago opened fire at the airport Friday. As the silent video begins, it shows what could be any baggage claim area in America.

People tugging suitcases behind them pass baggage carts and carousels. The gunman, wearing a blue sweater with black stripes on the shoulders and carrying a jacket in his left hand, enters the screen, draws the weapon with his right hand and appears to fire it three times.

A couple sitting nearby drops to the ground. A woman ducks behind a baggage cart. Several people, seeing nowhere to take cover, dive face-first to the ground.

Reached for comment on the footage, airport spokesman Greg Meyer said, “We are aware of the video on TMZ. There is currently an investigation involving law enforcement looking into the matter.” The Broward County Sheriff’s Office could not be immediately reached for comment.

Santiago confessed to planning the assault that killed five people and left several others wounded, according to a criminal complaint filed by federal prosecutors.

Asked if passengers would experience added security at the airport, Israel said he was more concerned with persuading lawmakers to keep firearms out of the hands of felons, the mentally ill and those on no-fly lists.

“The answer isn’t to beef up airports,” he said. “We’re a free society. We as Americans, we go to airports and stadiums and venues every day of our lives.”

Gun had been confiscated

He visited an Alaska FBI office in November, saying his mind was being controlled by US intelligence. He left a gun in the car.

(Previously, authorities said Santiago also left a newborn in the car, but Anchorage FBI spokeswoman Staci Feger-Pellessier walked that back Sunday, saying Santiago had his child with him when he walked into the FBI office, and “the child was in constant custody and care of the FBI, inside our facility, until his mother retrieved him.”)

The Army veteran’s rambling walk-in interview at the Anchorage office was concerning enough for authorities to take away his gun and order a mental health evaluation. But it wasn’t enough to get him mentally adjudicated, which would have prohibited Santiago from owning a firearm.

Santiago got the gun back a month later when he retrieved the pistol from police headquarters, and it was that weapon, law enforcement sources told CNN, that he used in the airport attack.

“As far as I know, this is not somebody that would have been prohibited based on the information that (authorities in Alaska) have. I think that law enforcement acted within the laws that they have,” said US Attorney Karen Loeffler.

Santiago also had some legal trouble and was due in court in March.

Complaint: He aimed for heads

Santiago, 26, faces three federal charges that each carry the possibility of the death penalty, the US Justice Department said.

He will be charged Monday with counts of causing serious bodily injury to someone at an international airport; using a firearm during and in relation to a violent crime; and causing the death of a person through the use of a firearm.

Santiago told investigators he bought a one-way ticket to Fort Lauderdale and brought a Walther 9 millimeter pistol and two magazines.

He said he went into a bathroom stall at the airport, loaded the gun and shot the first people he saw, according to the criminal complaint. He thinks he fired 15 bullets, aiming at his victims’ heads, the complaint says.

Santiago recently began selling his possessions, including his car. Friends and associates noticed more erratic behavior, investigators have learned from interviews with those who know him.

Authorities are examining writings, including online posts, that appear to indicate some period of planning, law enforcement officials said.

George Piro, the FBI’s special agent in charge in Miami, said Santiago flew from Anchorage to Minneapolis to Fort Lauderdale. A lieutenant with the Anchorage airport police said Santiago had one checked bag — a handgun case containing a pistol.

Though authorities do not yet know Santiago’s motive, the FBI has not ruled out terrorism, Piro said, adding that the suspect was cooperating with investigators, who spent several hours interviewing him.

Broward County Mayor Barbara Sharief said law enforcement has told her that Santiago “had some contact here in terms of family members” and had visited Fort Lauderdale and Miami in the past. However, she said, police have told her that Friday’s shooting was a random attack.

‘His mind was not right’

Santiago lived in Alaska, where he was a security guard.

In January 2016, he was arrested and charged with assault and criminal mischief after an argument with his girlfriend in Anchorage, according to court documents.

Santiago yelled at his girlfriend while she was in the bathroom, then broke down the door, according to the complaint. The woman told investigators that Santiago tried to strangle her and struck her in the side of the head, the complaint said. Santiago left before police arrived.

Anchorage municipal prosecutor Seneca Theno said Santiago pleaded no contest. Under a deferred prosecution agreement, the charges would have been dismissed if he complied with the conditions. He was due back in court March 28.

The military said Santiago’s nine years of service in the National Guard included one 10-month tour in Iraq, where he was awarded a combat action badge.

“His mind was not right,” Maria Ruiz Rivera said. “He seemed normal at times, but other times he seemed lost. He changed.”

She added, “He talked about all the destruction and the killing of children. He had visions all the time.”

Ruiz said she lost contact with her nephew several months ago.

“He stopped calling,” she said. “He wouldn’t respond to my messages. I would call and text. He seemed distant.”

Her family is still in shock, she said.

“Who would have imagined that he could do something like this?” she said. “I don’t say that because we’re family. I say it because he wasn’t like that.”

The suspect’s brother, Bryan Santiago, said he believes the shooting rampage resulted from mental issues that surfaced after his time in Iraq.

Esteban Santiago requested medical help from army and federal agencies, according to his brother. He received some treatment. Bryan Santiago said he used to speak with his brother regularly, but the communication ceased about a month ago.

Terry Andres of Virginia Beach, Virginia, was at the airport to begin a vacation with his wife, Ann, and his 63rd birthday was coming up, according to a close friend.

Andres died, and his wife was uninjured, said the friend, who asked to remain anonymous.

“Terry was the kindest, sweetest and best kind of friend anyone could have. He was the ultimate family man,” said the friend, who has known Andres since high school. “He and Ann were married for 40 years, and he absolutely adored his children and grandchildren.”

Another victim was Olga Woltering, 84, who was traveling with her husband, Ralph. They had traveled from their home outside Atlanta for a cruise.

The great-grandmother and loyal church member died, and her husband escaped serious injury, according to posts on social media.

“Olga was one of the most joyful, loving, caring and committed people I have ever met,” the Rev. Fernando Molina-Restrepo of the Catholic Church of the Transfiguration in Marietta, Georgia, told CNN. The Wolterings had been members of the church since 1978, the priest said.

Sen. Chuck Grassley of Iowa identified another slain victim as Michael Oehme of Council Bluffs. In a Twitter post, Grassley also said Oehme’s wife, Kari, was wounded in the shooting.

“Pray as I will for Oehme family of CouncilBluffs Iowa /Father Michael was killed and Kari the mother was wounded at FtLauderdale Massacre,” the tweet says.

A fourth victim was identified as 70-year-old Shirley Timmons, according to her grandson Steve Reineccius, who called her “an amazing daughter, wife, mother and grandmother.”

Timmons had been married for 51 years to her high school sweetheart, and “together they built a close, loving family with their three daughters, three son-in-laws and eight grandchildren. For Shirley, family meant vacations, football games and holiday traditions,” Reineccius said in a statement.