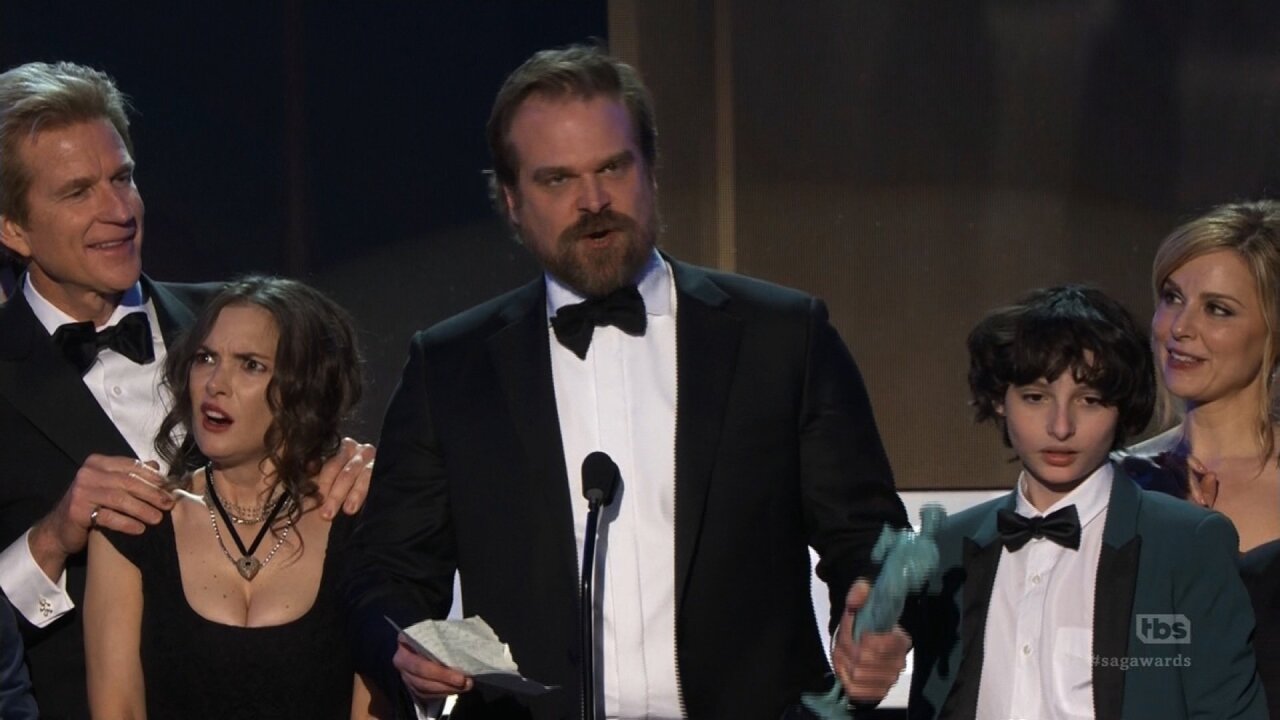 The cast of “Stranger Things” won big at Sunday night’s SAG Awards, and star David Harbour used his moment in the spotlight to deliver a speech that got some of his fellow actors on their feet.

LOS ANGELES — The cast of “Stranger Things” won big at Sunday night’s SAG Awards, and star David Harbour used his moment in the spotlight to deliver a speech that got some of his fellow actors on their feet.

Harbour, who plays Chief Jim Hopper on the Netflix series, spoke for the cast as they took the stage to accept their award for best ensemble in a drama series.

“This award from you, who take your craft seriously and earnestly believe, like me, that great acting can change the world is a call to arms from our fellow craftsmen and women to go deeper and, through our art, to battle against fear, self-centeredness and exclusivity of our predominantly narcissistic culture,” he said. “And through our craft, cultivate a more empathetic and understanding society by revealing intimate truths that serve as a forceful reminder to folks that when they feel broken, and afraid and tired they are not alone.”

Harbour’s words caused his co-star Winona Ryder to pump her fist in the air.

“We are united in that we are all human beings, and we are all together on this horrible, painful, joyous, exciting and mysterious ride that is being alive,” Harbour said.

Harbour ended his speech with a call to action on what was already a politically-charged evening.

“Now, as we act in the continuing narrative of ‘Stranger Things,’ we 1983 midwesterners will repel bullies, we will shelter freaks and outcasts — those who have no homes — [and] we will get past the lies, we will hunt monsters and when we are lost amidst the hypocrisy and casual violence of certain individuals and institutions, we will as per Chief Jim Hopper, punch some people in the face when they seek to destroy the weak, and the disenfranchised and the marginalized and we will do it all with soul, with heart and joy,” he said.

“We thank you for this responsibility,” Harbour added.

Speaking backstage after the awards, Harbour said while the cast was not anticipating a win, he had written his speech because he’s “bad at improvisation.”

“I did not want to go up there with nothing to say,” he said, adding that the speech went through “many iterations.”

“I’ve had a lot of feelings and thoughts this last week and I wanted to express it in some way that dealt with what we do through our art,” he said, making reference to the various executive orders put in place by President Donald Trump, without mentioning Trump by name.

In the minutes after Harbour’s speech, Ryder’s animated on-stage reaction caught attention on the internet.

Harbour said he “didn’t see her reaction,” but claimed he did run the speech by some of his cast mates in advance.

“I was very appreciative of their feedback,” he said.

“Stranger Things” beat out the likes of “Game of Thrones,” Westworld,” “Downton Abbey,” and “The Crown” in the ensemble category.