At least 3 killed after bus and train collide in Biloxi, Mississippi 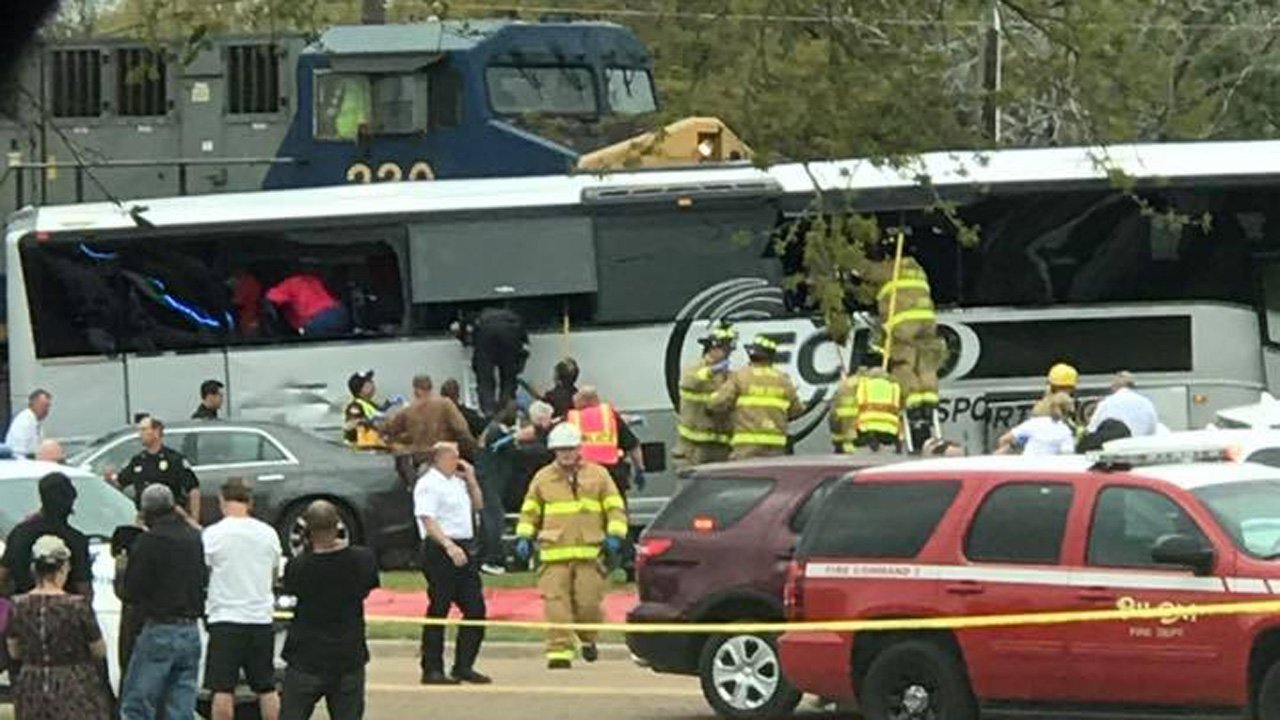 By Jamiel Lynch and Devon Sayers and Darran Simon

(CNN) — Four people were killed when a bus carrying senior citizens on a casino outing collided with a freight train Tuesday in Biloxi, Mississippi, officials said.

The Texas-based charter bus, carrying 48 people, was heading north on Main Street when it got stuck trying to cross the train tracks, according to Cecilia Dobbs Walton, a city spokeswoman. The eastbound CSX train struck the bus around 2:13 p.m., said Vincent Creel, also a city spokesman.

Seven passengers were critically injured, city officials said. Authorities said 41 people were taken to hospitals, including one person who was airlifted from the scene.

The train’s engineer and conductor were not injured, said CSX spokesman Gary Sease.

Melissa Flores of Lockhart, Texas, said her mother, Mary Ramirez, was a passenger on the bus, along with other members of the Bastrop Senior Center in Bastrop, Texas, about 33 miles southeast of Austin. The group left Bastrop on Sunday for a weeklong trip through Mississippi and Louisiana, Flores said.

According to their itinerary, Flores said the group ate breakfast Tuesday morning at Hollywood Casino Gulf Coast in Bay St. Louis, Mississippi and was scheduled to arrive at Boomtown Casino Biloxi in Biloxi around 2:30 p.m.

Flores said Ramirez, 71, told her the bus stalled on the tracks, and passengers started to leave the bus after a few minutes.

Seven passengers managed to get off the bus, CNN affiliate KEYE reported.

Ramirez suffered minor injuries, including a gash on her ankle, Flores said. Flores said Ramirez is a widow and a retired railroad commission employee. Ramirez does not live in the senior center but is an active member there, Flores said.

Bastrop Senior Center President Barbara Adkins said 27 people on the bus were from the center.

“My heart goes out to those folks to know that there was nothing they could do,” Adkins said, according to KEYE. “Prayers for them and prayers for their families.”

Residents from Austin and Sealy, a city west of Houston, were also aboard the bus, KEYE reported.

A good Samaritan to the rescue

Motorist Austin Dominey said it looked like the bus had bottomed out as it tried to cross the train tracks, CNN affiliate WKRG reported. Dominey told the station it appeared the bus driver was trying to back up when the train ran into it.

There is a low ground clearance sign on each side of the tracks.

Dominey said a man in a car in front of him raced down the street and started to help people climb out some broken windows. The driver stood on top of his Chrysler sedan, which he had parked next to the bus, according to Dominey.

“Soon as it happened you could see people, like the whole community coming out to really help those people that were in need,” he said.

“Our thoughts and prayers are with the families of those who tragically lost their lives and all those affected by this accident,” Ameet Patel, a casino official, said in a statement posted on Facebook. Patel is senior vice president of regional operations for Penn National Gaming, the owner of the Bay St. Louis and Biloxi casinos.

Biloxi, a Mississippi Gulf Coast city about 60 miles south of Mobile, Alabama, is a popular destination for many casino goers.

Flashing lights and gates at crossing

The eastbound mixed-freight train, heading from New Orleans to Mobile, Alabama, had three locomotives and 52 cars, 27 loaded cars and 25 empty cars, Sease said. The crossing has flashing lights and crossing gates, according to Sease.

He said all locomotives are equipped with cameras. But he couldn’t immediately confirm if the locomotives have event recorders, which typically record data such as speed.

“This is a tragic event for our city,” Biloxi Mayor Andrew Gilich said.

Tuesday’s collision isn’t the first crash at the Main Street crossing. Two months ago, a Pepsi truck, also traveling north, tried to cross the tracks and became stuck on the low ground clearance, Biloxi officials posted on the city’s Facebook page then. No one was injured in the crash.

Prayers for the victims

John Ferrari, CEO of ECHO Transportation, the charter company, said it is also investigating Tuesday’s crash. He didn’t immediately have any additional information.

Mississippi Gov. Phil Bryant tweeted: “Please pray for the injured and the families of the lost.”

The National Transportation Safety Board said its investigators are scheduled to arrive in Biloxi on Wednesday morning.