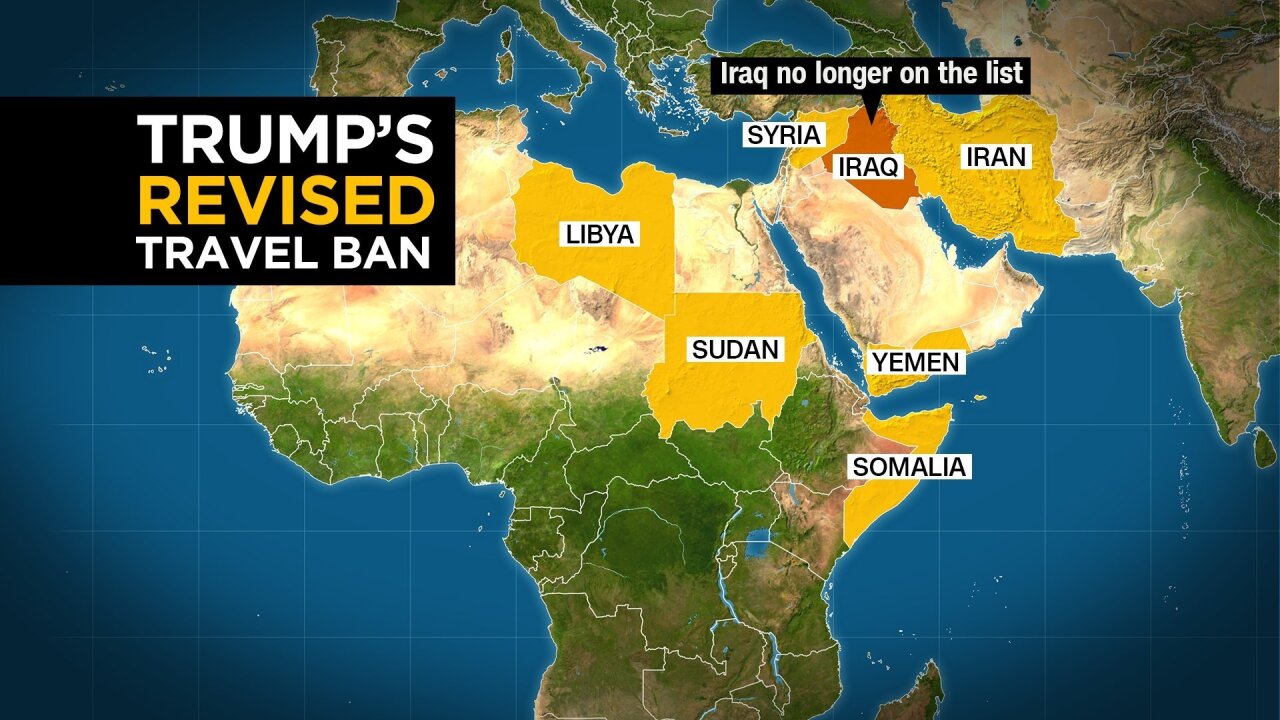 (CNN) — A federal judge in Hawaii blocked President Donald Trump’s new travel ban on Wednesday afternoon, hours before the ban was set to go into effect.

In a 43-page ruling, US District Court Judge Derrick Watson concluded in no uncertain terms that the new executive order failed to pass legal muster at this stage and the state had established “a strong likelihood of success” on their claims of religious discrimination.

Trump decried the ruling during a rally Wednesday night in Nashville, introducing his statement as “the bad, the sad news.”

“The order he blocked was a watered-down version of the first one,” Trump said, as the crowd booed the news.

“This is, in the opinion of many, an unprecedented judicial overreach,” he added, before pledging to take the issue to the Supreme Court if necessary.

The practical effect of the ruling — which applies nationwide — is that travelers from six Muslim-majority countries and refugees will be able to travel to the US.

Unlike the previous executive order, the new one removed Iraq from the list of banned countries, exempted those with green cards and visas and removed a provision that arguably prioritizes certain religious minorities.

The new ban was announced earlier this month and was set to take effect Thursday. It would have banned people from Iran, Libya, Somalia, Sudan, Syria, and Yemen from entering the US for 90 days and all refugees for 120 days.

“The illogic of the Government’s contentions is palpable. The notion that one can demonstrate animus toward any group of people only by targeting all of them at once is fundamentally flawed,” Watson wrote.

“Equally flawed is the notion that the Executive Order cannot be found to have targeted Islam because it applies to all individuals in the six referenced countries,” Watson added. “It is undisputed, using the primary source upon which the Government itself relies, that these six countries have overwhelmingly Muslim populations that range from 90.7% to 99.8%.”

“It would therefore be no paradigmatic leap to conclude that targeting these countries likewise targets Islam,” Watson added. “Certainly, it would be inappropriate to conclude, as the Government does, that it does not.”

“When considered alongside the constitutional injuries and harms … and the questionable evidence supporting the Government’s national security motivations, the balance of equities and public interests justify granting the Plaintiffs’ (request to block the new order),” Watson wrote.

The Justice Department said it will defend the new travel ban.

“The Department of Justice strongly disagrees with the federal district court’s ruling, which is flawed both in reasoning and in scope. The President’s Executive Order falls squarely within his lawful authority in seeking to protect our Nation’s security, and the Department will continue to defend this Executive Order in the courts,” DOJ said in a statement Wednesday night.

After Trump initially blasted a federal judge in Seattle on Twitter for blocking the original travel ban, and several other federal courts halted its implementation last month, the White House went back to the drawing board for over a month and rewrote the ban — hoping this one would survive legal scrutiny.

Yet certain statements made by Trump’s senior advisers have come back to bite the administration in court.

In the ruling, Watson brought up specific statements made by the President and Stephen Miller, one of his top policy advisers and a reported architect of the original order, in cable news interviews.

Trump made plain his opposition to Islam in an interview with CNN’s Anderson Cooper last year, asserting: “I think Islam hates us.”

Cooper asked then-candidate Trump in the interview to clarify if he meant Islam as a whole or just “radical Islam,” to which Trump replied, “It’s very hard to separate. Because you don’t know who’s who.”

The judge cited this interview as an example of the “religious animus” behind the executive order and quoted Trump telling Cooper: “We can’t allow people coming into this country who have this hatred of the United States.”

Likewise, the decision cited an interview Miller had on Fox News following the legal struggles of the first executive order last month, which the legal opponents of the ban have emphasized repeatedly.

In a February interview, Miller downplayed any major differences the new executive order would have from the first and said it would be “responsive to the judicial ruling” holding it up and have “mostly minor technical differences.”

“Fundamentally, you’re still going to have the same basic policy outcome for the country,” Miller added.

“Any reasonable, objective observer would conclude, as does the court for purposes of the instant Motion for TRO, that the stated secular purpose of the Executive Order is, at the very least, ‘secondary to a religious objective’ of temporarily suspending the entry of Muslims,” he added.

“Here, it is not the case that the Administration’s past conduct must forever taint any effort by it to address the security concerns of the nation,” he wrote. “Based upon the current record available, however, the Court cannot find the actions taken during the interval between revoked Executive Order No. 13,769 and the new Executive Order to be ‘genuine changes in constitutionally significant conditions.'”

“The Constitution has once again put the brakes on President Trump’s disgraceful and discriminatory ban. We are pleased but not surprised by this latest development and will continue working to ensure the Muslim ban never takes effect,” said ACLU attorney Omar Jadwat, who argued for the case for the challengers in Maryland federal court earlier on Wednesday.

The Justice Department has yet to indicate its next legal steps, but Trump administration has argued the ban is necessary to protect the nation’s security.

“We cannot compromise our nation’s security by allowing visitors entry when their own governments are unable or unwilling to provide the information we need to vet them responsibly, or when those governments actively support terrorism,” Attorney General Jeff Sessions said March 6.

Federal judges in several states, including Maryland and Washington state, are also in the process of evaluating challenges to the new travel ban, but may defer ruling in light of the nationwide ruling in Hawaii.