Tom Price: Trump’s health care promises will be true down the line 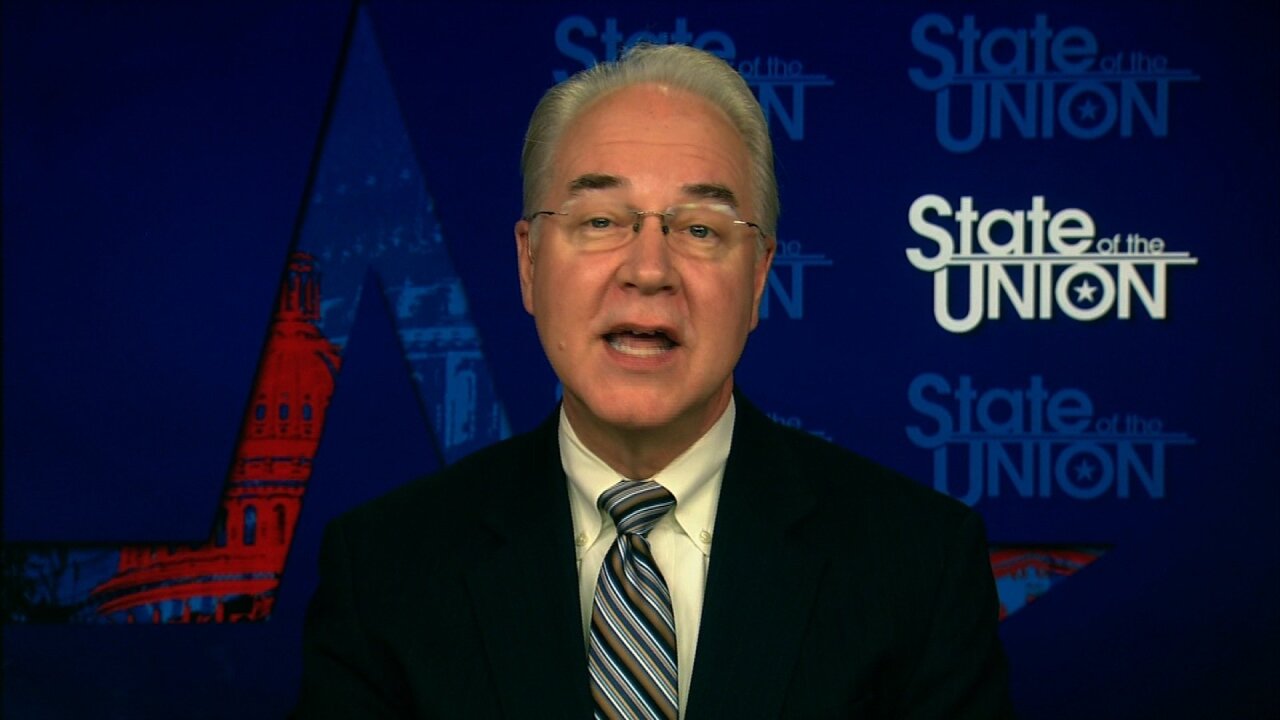 Health and Human Services Secretary Tom Price defended Trump’s campaign promise to cover every American, saying the GOP proposal in its entirety would give everyone access to the care they want.

WASHINGTON (CNN) — The man tasked with shepherding the Republican plan to replace Obamacare defended President Donald Trump’s campaign promise to cover every American, saying Sunday that the multi-layered GOP proposal would give everyone access to the care they want.

Health and Human Services Secretary Tom Price said on CNN’s “State of the Union” that evaluations of the party’s plan focused only on the American Health Care Act, the legislation backed by Trump and House Speaker Paul Ryan that is coming up for a House vote on Thursday.

The analysis of the plan’s impact also needs to take into account such things as reducing regulatory constraints and excessive litigation that contributes to higher health care costs, Price told anchor Jake Tapper.

“The plan in its entirety is the one that the President has ensured the American people every single American will have access to affordable coverage that works for them,” Price said.

On the campaign trail, Trump said the government would pay for health care for those who need it, and before his inauguration he promised “insurance for everybody.” However, the Congressional Budget Office and other observers, such as the Brookings Institution, have said the GOP bill to repeal and replace part of Obamacare would leave millions uncovered.

Price disputed the relevance of the reports, saying Sunday that both he and the President were “committed” to the concept of insurance for all. The former Georgia lawmaker stressed that the passage of the bill on which those reports are based would be just one of three steps, the second two being administrative reforms and the passage of other legislation dealing with health care outside of the American Health Care Act.

“This bill that’s moving through Congress right now is simply the first step,” Price said. “Every American will have access to the kind of coverage that they want.”

Pressed by Tapper on the point that access to coverage is different than actually having coverage, Price said the GOP plan would lower the costs of insurance and increase options while overhauling Medicaid, which is geared toward lower-income people and those with disabilities.

Price advocated the legislative proposal to phase out the Medicaid expansion provided under Obamacare and overhaul the program as spending on it decreases. This option has drawn criticism from Democrats and some in the GOP, including four Republican governors.

Govs. John Kasich of Ohio, Rick Snyder of Michigan, Brian Sandoval of Nevada and Asa Hutchinson of Arkansas sent a letter Thursday to Ryan and Senate Majority Leader Mitch McConnell expressing concerns about the plan’s potential effect on their states.

They wrote the current GOP proposal’s approach to Medicaid “provides almost no new flexibility for states, does not ensure the resources necessary to make sure no one is left out, and shifts significant new costs to states.”

Instead, the four governors urged the two leaders to consider their alternative health care plan that would allow each state “to pursue Medicaid transformation in its own way.”

Asked about the governors’ opposition, Price reiterated Sunday that the bill coming up for a House vote was just the “first piece” of the GOP plan, and called on people to look not just at the top-line funding for Medicaid, but also how the program is administered.

“We need to stop in Washington measuring the success of programs by how much money we’re putting into it,” Price said.

Major Republicans, however, disagreed with the administration’s and Ryan’s health care strategy on Sunday.

Heritage Foundation President Jim DeMint said on “State of the Union” that the GOP health care bill could not pass “without improvements.”

“(Trump) is ready to listen to improvements,” he added.

Sen. Ted Cruz, meanwhile, called for major changes to the bill, saying it would cause premiums to rise.

“That ain’t gonna happen,” the Texas Republican said on CBS’s “Face the Nation.

Cruz said Republicans needed to take their ideas for the third phase of the health care overhaul, a grab bag of legislative changes, and put them into the first phase, the American Health Care Act.

Sen. Tom Cotton told CNN that Republicans needed to make the bill better instead of focusing on “some arbitrary deadline.”

“It’s fixable, but it’s going to take a lot of work,” the Arkansas Republican said.