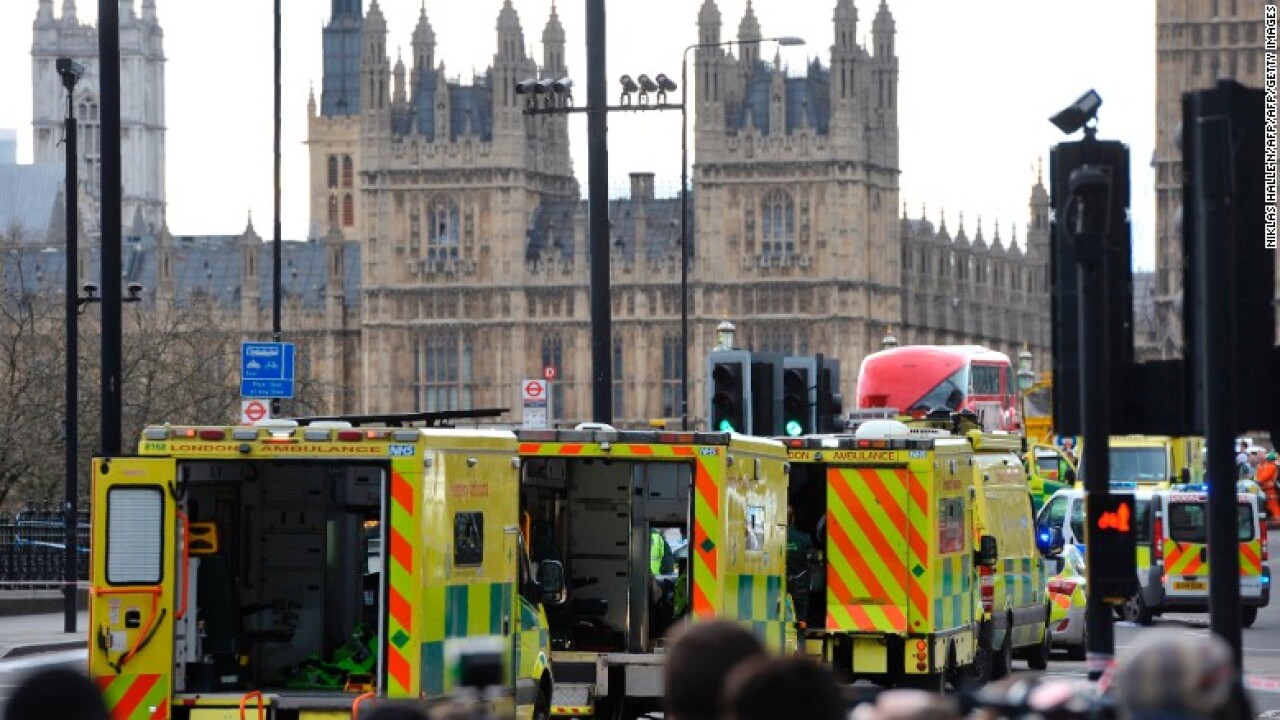 “Masood was not the subject of any current investigations and there was no prior intelligence about his intent to mount a terrorist attack,” a Metropolitan Police statement said.

Masood, who was born in Kent and is thought to have been living in the West Midlands, had previous convictions for violence.

Police arrested eight people in raids around Britain, as an ISIS-affiliated news agency claimed that the extremist group was behind the outrage.

Four people died in the attack including Utahn Kurt Cochran, a woman of Spanish origin and a police officer stabbed as he defended Parliament — and another 40, many of them from other countries, were injured. Of those, 29 required hospital treatment and seven are critical, police said.

Prime Minister Theresa May earlier revealed that Masood was once linked to violent extremism. Her statement to Parliament came a day after it was locked down as the knife-wielding assailant breached its perimeter.

May said the attacker had been investigated by security services but was regarded as a “peripheral figure.” Authorities did not know he was about to mount an assault, she said.

Police said Masood’s most recent conviction was in 2003 for possession of a knife.

Britain’s most senior counterterror police officer said inquiries were continuing in London, Birmingham and elsewhere after the lone attacker plowed a car into crowds of people, killing two people, before stabbing a police officer dead in the grounds of the UK Parliament.

A tweet from ISIS-affiliated news agency Amaq said the attacker was “a soldier” of ISIS inspired by its message.

However, ISIS has provided no evidence for any direct links to the assailant, whom it did not name.

May: ‘Our values will prevail’

In a defiant speech, May vowed that Britain’s freedoms and values would remain undiminished.

“Yesterday an act of terrorism tried to silence our democracy. But today we meet as normal — as generations have done before us, and as future generations will continue to do — to deliver a simple message: we are not afraid. And our resolve will never waiver in the face of terrorism.

“And we meet here, in the oldest of all Parliaments, because we know that democracy — and the values it entails — will always prevail.”

She said the police officer who was killed in the attack, PC Keith Palmer, was “every inch a hero and his actions will never be forgotten.”

May said Wednesday’s attacker was born in Britain and was investigated “some years ago” in relation to concerns about “violent extremism.” But he was not part of the “current intelligence picture.”

May said the current threat level for Britain — which has been at severe, the second highest, for some time — would not be raised to critical because there was no specific intelligence that an attack was imminent. Since 2013, police, security and intelligence agencies have successfully disrupted 13 separate terrorist plots in Britain, she said.

“We know the threat from Islamist terrorism is very real. But while the public should remain utterly vigilant they should not — and will not — be cowed by this threat,” she said.

CNN Terrorism Analyst Paul Cruickshank said the language used by ISIS asserting the attack was by one of its “soldiers” did not necessarily mean the group was claiming direct connections to the attacker. This phrasing has been used in the past by the group for attacks ISIS believes it helped inspire, he said.

Mark Rowley, the lead officer in the UK for counter-terrorism policing, said hundreds of detectives worked through the night in a fast-moving inquiry. Their investigation focused on the attacker’s motivation, preparation and associates, he said.

Overnight, officers from the Metropolitan Police searched addresses in Birmingham, central England, and elsewhere. Arrests were made in Birmingham and London.

“It is still our belief — which continues to be borne out by our investigation — that this attacker acted alone yesterday and was inspired by international terrorism,” he said. “To be explicit, at this stage, we have no specific information about further threats to the public.”

Rowley told journalists late Wednesday that police were working on the assumption there was an Islamist dimension to the attack, the first mass-casualty terrorist outrage in Britain since 2005 when 52 people died in the July 7 bomb attacks on the London public transportation system.

A UK official told CNN the working theory was that the attack was ISIS “inspired or copycat.”

The car rental company whose vehicle was used in the attack said it was cooperating with the police.

London Mayor Sadiq Khan told CNN that London was protected by the best police and security services in the world. “I’m confident that we are doing all that we can to keep our city safe, to keep Londoners safe and to keep visitors safe,” he said.

The area around Westminster, the heart of the British government since the 16th century, was teeming with Londoners and visitors when the attack began.

The officer killed at Carriage Gates, an entrance to Parliament, was named as Keith Palmer, a member of the Metropolitan Police’s parliamentary and diplomatic protection command unit. He was a husband and father, and had served in the Met for 15 years.

The mayor of Betanzos in northwest Spain, Ramon Garcia Vasquez, named the woman who died as Frade, 43, and told CNN that her family and relatives live in the town. Vasquez said Frade had lived in London for several years with her Portuguese husband.

“We are totally overwhelmed by the news and we send our condolences to the people in London,” Garcia Vasquez added.

Utahn Kurt Cochran was killed while in London celebrating his 25th wedding anniversary with his wife Melissa, who suffered a broken leg, broken rib and a cut to her head, her brother Clint Payne posted to social media.

“Our hearts are broken this day as we say good-bye to our dear brother-in-law Kurt. He passed away from the injuries sustained in the London terrorist attack yesterday,” he posted.

US President Donald Trump tweeted: “A great American, Kurt Cochran, was killed in the London terror attack. My prayers and condolences are with his family and friends.”

A number of tourists were among 40 people hurt in the assault, including five South Koreans and three French high school students, according to officials from both countries. One Australian had been hospitalized, officials there said. A Chinese foreign ministry spokeswoman said one Chinese tourist was slightly injured.

A candlelit vigil will be held Thursday evening in Trafalgar Square, not far from Westminster, to show solidarity and remember the victims, the mayor’s office announced.

One member of the government, Tobias Ellwood, was lauded as a hero after attempting to save Palmer.

People echoed May’s defiance online, sharing an image of the London Underground logo emblazoned with the words “We are not afraid.”

Khan announced extra armed officers would be deployed on the streets of the British capital. However, Rowley said there were no plans for military officers to provide extra protection at this stage.

World leaders expressed their condolences. Trump phoned the British Prime Minister to pledge US support in “responding to the attack.”

UK Foreign Secretary Boris Johnson led the UN Security Council in a moment of silence Thursday for those affected in London, and for the victims of terror incidents elsewhere.