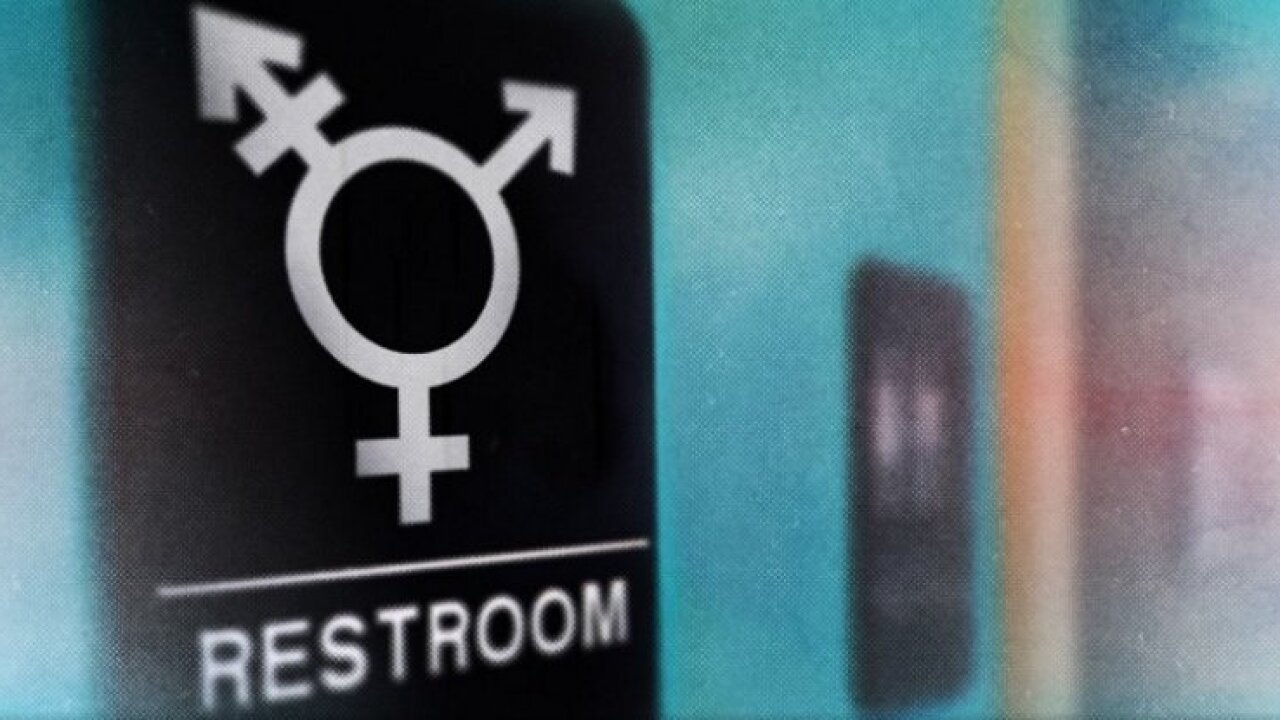 An illustration of a sign for a transgender bathroom.

(CNN) — North Carolina lawmakers on Thursday passed a bill that repeals the state’s controversial bathroom law in a move meant to end a year of tumult that saw businesses leave and major sporting events and concerts canceled.

Gov. Roy Cooper signed the measure into law, saying, “For over a year now, House Bill 2 has been a dark cloud hanging over our great state. It has stained our reputation. It has discriminated against our people and it has caused great economic harm in many of our communities.”

Cooper said the new law is “not a perfect deal and it is not my preferred solution.”

He wanted a law that added protections for LGBTQ North Carolinians, but said that wasn’t possible with Republicans holding a supermajority in the Legislature.

Fierce criticism remains from LGBTQ groups, which say the new bill — which eliminates rules about who can use which restroom but retains other features — still allows for discrimination against transgender people.

Cooper said the protections are temporarily delayed, and he will work to ensure they are not denied forever.

The bill, a compromise agreed to Wednesday by Cooper and the state’s top two Republican legislators, was approved by the House and Senate after contentious debate.

It wasn’t immediately clear whether organizations that opposed the outgoing bathroom law — such as the NCAA — would be satisfied and consider restoring events and other ventures in the state.

“Nobody is 100% happy, but I will say I’m 95% happy,” said House Speaker Tim Moore, a Republican who beacked the compromise.

What the new bill does

— It repeals last year’s House Bill 2. That bill had required that people at a government-run facility must use bathrooms and locker rooms that correspond to the gender on their birth certificate, if the rooms in question are multiple-occupancy.

— It effectively maintains a key feature of HB2 by leaving regulation of bathroom access solely in control of the Legislature.

— It prevents local governments, until December 2020, from passing or amending their own nondiscrimination ordinances relating to private employment and public accommodation.

That last point is meant to prevent ordinances such as one Charlotte City Council passed in February 2016, before HB2. That ordinance added gender identity to the city’s protections against discrimination in public accommodations, and allowed transgender people to use the bathroom that matches the gender they identify with.

State lawmakers introduced HB2 a month later, in part to wipe out the Charlotte ordinance.

Greg Wallace, a professor at Campbell Law School in Raleigh, told CNN that the bill effectively restores the status quo, pre-HB2 — with the exception of the stipulations.

LGBTQ groups, other critics are upset

A day after Cooper — who beat incumbent Pat McCrory with a campaign promise to repeal the bathroom law — and Republican lawmakers announced the compromise, the Senate passed it 32-16 and the House then voted 70-48.

LGBT groups and other HB2 critics said the deal is a “repeal” in name only — with one advocate calling it “HB2.0.” Focusing on the two clauses the compromise added back, they say the bill fails to protect transgender people from discrimination.

“This so-called ‘deal’ is politics at its worst and was only made as the state faced losing key NCAA events and further economic damage. What we witnessed was a last-minute idea thrown together with little thought of protecting transgender residents,” GLAAD said.

“Disappointed the #NCGA just voted for a bill which fails to end LGBT discrimination in a move to put basketball over civil rights. #ncpol,” the ACLU said on Twitter.

The basketball reference is a nod to the NCAA, which moved 2016-2017 championship events out of the state because of HB2 and said it would soon decide where 2018-2022 championships will be held.

That may have put pressure on North Carolina’s politicians to reach this week’s deal. Indeed, during debate on the House floor, several representatives said they thought their colleagues were inappropriately rushing the vote to satisfy the NCAA.

“If we could have props in here, I would take a basketball covered in money and roll it down the middle aisle there, because that’s what this is about, money and basketball,” state Rep. Carl Ford, a Republican, said before voting no on the repeal.

Chris Sgro, executive director of Equality NC, called the agreement a “shell piece of a legislation,” on which the LGBTQ groups had not been consulted.

“The initiative is not a repeal,” Sgro said. “It’s doubling down on the discrimination that HB2 exacts — it’s HB2.0. It doesn’t allow municipalities to protect people from discrimination ’til 2020.”

Moore, the House speaker, said the compromise ensures cities didn’t go “above and beyond” what the state was willing to mandate.

He said the bill puts North Carolina in line with federal guidelines and 30 other states. This should guarantee that entities such as the NBA and NCAA don’t treat North Carolina differently than they would any other state, he said.

Senate Leader Phil Berger has said the prohibition against city discrimination ordinances until December 2020 was designed to “allow federal litigation to play out.”

The deal came after several other failed attempts over the past year. State leaders faced considerable economic pressure, because companies and organizations that opposed the law withdrew events from the state and called off job-expansion plans.

HB2 is estimated to have cost the state millions of dollars through the loss of jobs, businesses and consumer spending, though by one measure, the losses only amount to about 0.1% of the state’s total GDP.

The 2017 NBA All-Star Game, which was held in February, was moved from Charlotte to New Orleans. The NCAA relocated several college athletic championship events for the 2016-17 season because of the law and implied five more years of tournaments were at stake if HB2 remained.

The NCAA stated last week that it had moved the championships “because of the cumulative impact HB2 had on local communities’ ability to assure a safe, healthy, discrimination free atmosphere for all those watching and participating in our events.”

It remains to be seen how the NCAA will view the legislative action.

When the NCAA announced in September it was moving championship events out of North Carolina, it listed the following factors:

North Carolina laws invalidate any local law that treats sexual orientation as a protected class or has a purpose to prevent discrimination against lesbian, gay, bisexual or transgender individuals. North Carolina has the only statewide law that makes it unlawful to use a restroom different from the gender on one’s birth certificate, regardless of gender identity. North Carolina law provides legal protections for government officials to refuse services to the LGBT community. Five states plus numerous cities prohibit travel to North Carolina for public employees and representatives of public institutions, which could include student-athletes and campus athletics staff. These states are New York, Minnesota, Washington, Vermont and Connecticut.