Section of I-85 collapses in Atlanta after massive fire 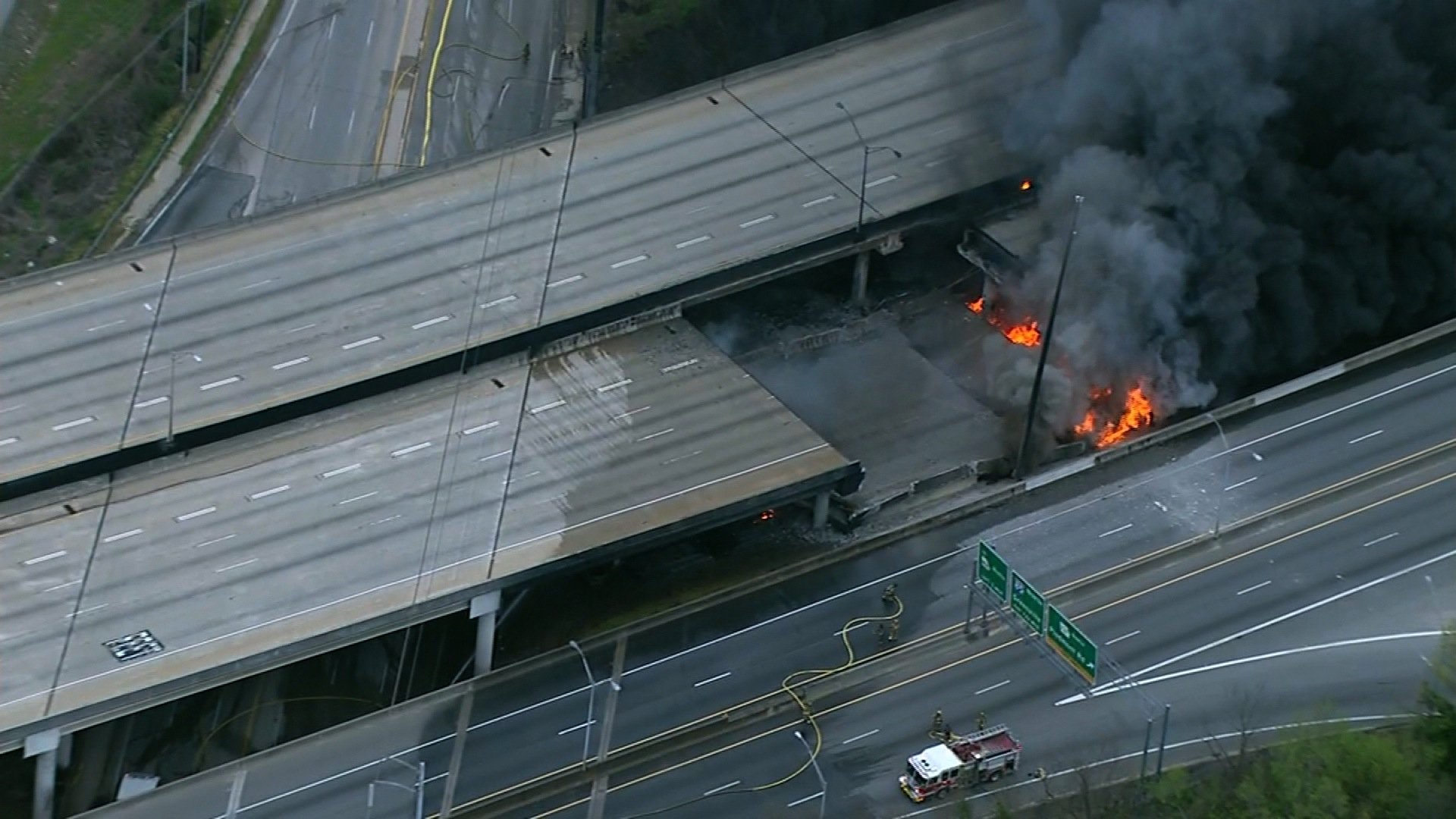 By Nicole Chavez and Steve Almasy

(CNN) — An elevated section of northbound Interstate 85, a major north-south artery for the Southeast, collapsed Thursday evening in Atlanta after a massive fire, officials said.

All five lanes of the highway in each direction were blocked and will be closed for the foreseeable future, officials said.

That prospect sent shudders through metro Atlanta commuters, who already contend with heavy traffic. An estimated 250,000 vehicles drive daily through that stretch of I-85, according to the Georgia Department of Transportation.

Officials scrambled to come up with alternate routes and encouraged riders to use public transit.

Cortez Stafford, a spokesman with the Atlanta Fire Department, said a unit was returning from another fire when it saw heavy smoke coming from under I-85.

“There was a 40-feet or higher wall of fire. Power lines were falling and arcing heavily and falling in the streets,” Stafford told CNN.

The elevated span of highway — a few miles north of downtown — collapsed about 7 p.m. as crews battling the fire got out of danger. The cause of the fire was not immediately known.

As concrete began falling from under the bridge, firefighters were asked to step back, Stafford said. “Not even two minutes later, the highway fell with a big ‘kaboom.’ (It) knocked our guys back.”

There were no reported injuries.

The section that fell, which appeared to be 75 to 100 feet long, broke at the point of pillar support, a CNN correspondent observed.

In an unusual move, two fire trucks from Hartsfield-Jackson Atlanta International Airport in south Atlanta came to the scene and sprayed foam on the fallen section and flames.

Interstate traffic was stopped and turned around, creating jams that extended 5 miles or more, not long by Atlanta standards, but many drivers were stuck in the area for hours.

Georgia Department of Transportation spokewoman Natalie Dale told CNN, “Given the collapse on the northbound side, I cannot fathom the southbound will be open anytime soon.”

Dale said inspectors were waiting for chance to inspect the freeway. Transportation authorities are trying to put together a traffic plan, a detour plan for commuters.

“We will be up all night and into the morning,” says Dale. A state highway runs next to the section of the interstate, but it is just two lanes.

“It’s going to take some time to get it repaired and to get it back in service,” he said, without offering a time frame for reopening.

The fire was still being attended to Thursday night. The crash trucks from the airport would spray foam on the fire and the flames would subside, only to flare up again.

The fire occurred near the city’s busy Piedmont Road and just south of Georgia 400, a major route to and from the northern Atlanta suburbs.

CNN’s Eliott C. McLaughlin was driving north on I-85 during evening rush hour when he saw black smoke rising from underneath the elevated highway.

Cars getting off at an exit for 400 started slowing more quickly than a normal rate and some cars pulled off onto the shoulder.

But many cars on the left side of the five-lane section barreled through the thick black smoke. They disappeared into the darkness as they drove on, he said.

McLaughlin slowly followed the taillights of an SUV through the smoke. After about 50 yards, McLaughlin could see clearly again. It smelled like an engine fire, he said.

The smoke blew over a nearby shopping center and had a pungent smell of fuel, CNN’s Joe Sutton said.

MARTA, Atlanta’s rail and bus system, said it would offer extended service through the weekend.

One school district, in nearby DeKalb County, canceled classes for Friday. Schools in Atlanta will be open, Mayor Kasim Reed said, but city offices won’t open until 10 a.m. State offices will open at the same time.

Next week is spring break for many schools in the Atlanta metropolitan area.

Weeks of repair ahead

He said it is too early to say how long it will take to repair the highway.

“It certainly can take anywhere from several weeks to several months,” he said. “The surrounding sections of the highway will be evaluated to determine if any damage was sustained from the heat. It is probably prudent to check both sides of the adjacent sections (northbound and south bound).”