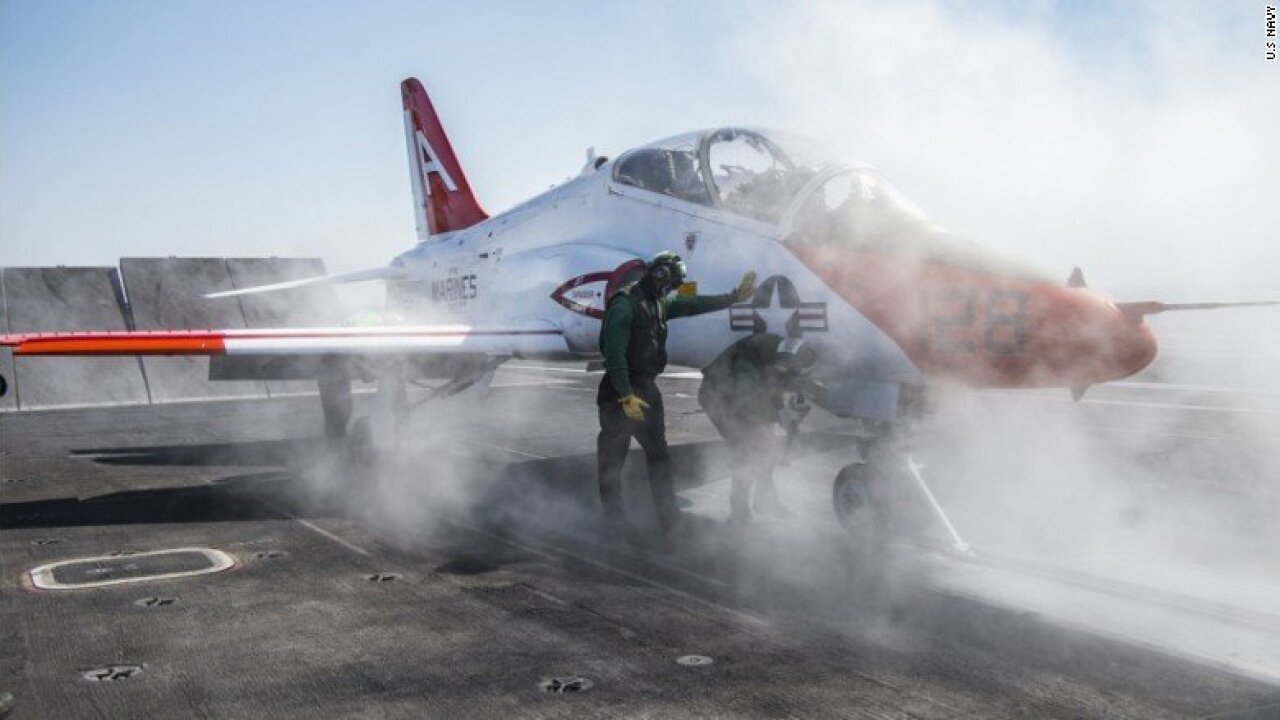 By Zachary Cohen and Ryan Browne

(CNN) — The US Navy has implemented a “safety pause” for its fleet of T-45 training jets, according to a US official, a move that comes just days after more than 100 instructional pilots refused to fly in protest of continuing issues with the aircraft’s oxygen system.

The two-day temporary grounding of all T-45 Goshawks will give Navy officials time to assess the concerns related to the rising rate of “physiological episodes” affecting pilots.

Reported physiological episodes resulting in dizzyness or even blackouts have been caused by oxygen contamination, human factors — including air sickness and vertigo, failure of the on-board oxygen generation system and the failure of other key systems — according to testimony last week from Rear Adm. Michael Moran.

The number of physiological episodes affecting T-45 pilots per year has quadrupled since 2012, according Moran, a troubling trend that has also been identified in Navy pilots who fly F-18s and EA-18G Growlers.

But determining the root cause of the issue is complicated by the fact that more than one factor can be attributed to a single physiological event.

Instructional pilots started to boycott training flights last Thursday, after raising concerns that commanders were not doing enough to fix the urgent safety problem despite being informed of the risk.

“Last Friday, we had roughly 40% of our flights canceled in the T-45 training commands in Meridian, Pensacola and Kingsville because of operational risk management concerns voiced by the instructor pilots,” Navy spokesperson Cdr. Jeanette Groeneveld said in a statement.

“We take the concerns of our aircrew seriously and have directed a three day operational pause for the T-45 community to allow time for naval aviation leadership to engage with the pilots, hear their concerns and discuss the risk mitigations as well as the efforts that are ongoing to correct this issue,” she added.

And a US defense official told CNN earlier that some Navy officers had been covering up the pilots’ initial refusal to fly by citing technical and other issues with the aircraft, raising questions about a breakdown in the chain of command. Fox News first reported the pilots’ decision not to fly, a move that essentially led to the grounding of hundreds of training flights.

After being questioned on the issue, Adm. John Richardson reiterated the Navy’s commitment to resolving the issue during testimony before the House Armed Services Committee Wednesday, calling it the “the top safety priority for naval aviation.”

“It’s a complex problem and requires a multidimensional solution, first and foremost is the human dimension and communication,” Richardson said, downplaying disagreement between instructional pilots and senior officers as a “breakdown in communication.”

“We are making sure that we are listening and they all feel like they can be talking to leadership so we understand where their anxiety and concerns are,” he added.

The Navy has also developed training to make sure pilots recognize the symptoms of hypoxia and understand the appropriate emergency procedures.

Hypoxia results from deficiency in the amount of oxygen delivered to cells and can induce potentially fatal complications.

But frustration over the lack of a permanent solution led to last week’s boycott and Wednesday’s two-day pause.

“To get to the point where you have them saying we’re not flying and we don’t think our leadership is listening, which is what you’re hearing out of these pilots … that’s pretty severe,” McSally, a former Air Force pilot, added.