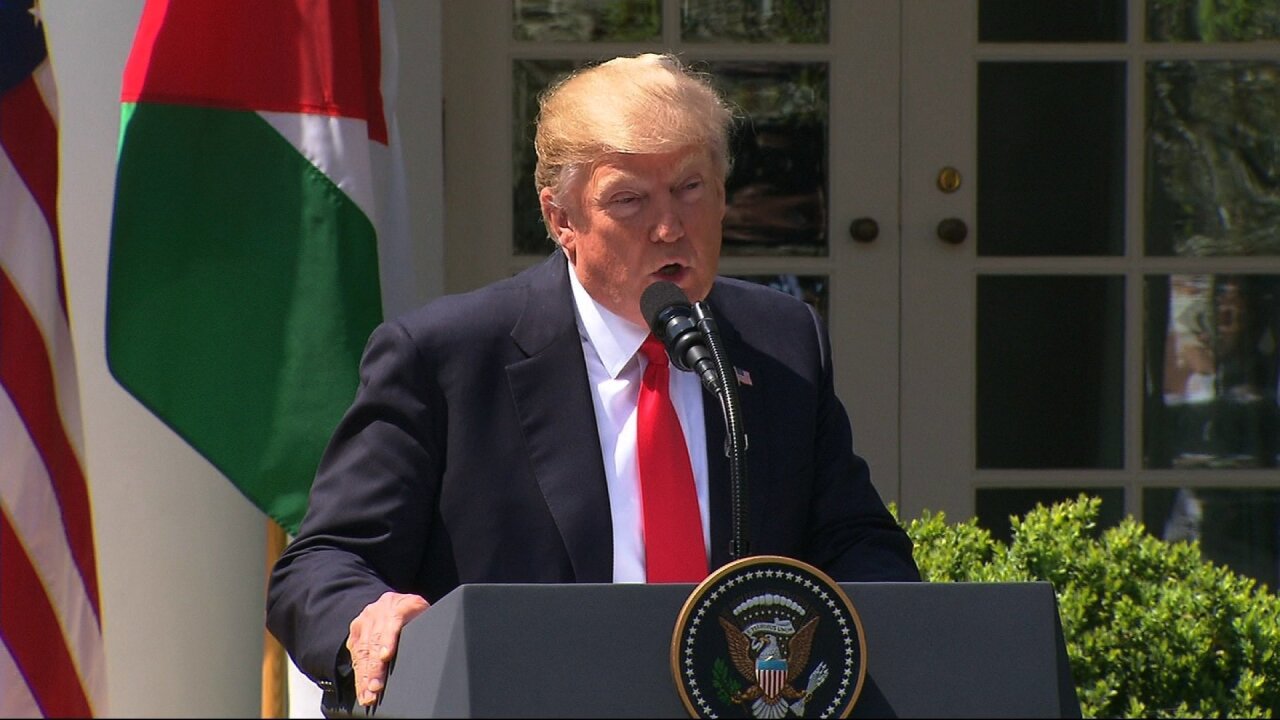 Russia has challenged President Donald Trump to set out his strategy on Syria after he declared that an apparent chemical weapons attack had transformed his views on the regime of President Bashar al-Assad.

MOSCOW — Russia has challenged US President Donald Trump to set out his strategy on Syria after he said an apparent chemical weapons attack had transformed his views on President Bashar al-Assad’s regime.

Trump, who has previously argued against removing Assad from power, said the attack on a rebel-held town in Syria’s Idlib province was a “heinous” act that “crossed a lot of lines for me.”

The President has not offered any details of how US strategy on Syria would change — but he did tell some members of Congress that he’s considering military action in Syria in retaliation for Tuesday’s chemical attack, a source familiar with the calls told CNN on Thursday.

The Joint Chiefs of Staff held a quickly called meeting in the office of the chairman, Marine Gen. Joseph Dunford, on Thursday afternoon and were briefed on the military options regarding Syria, a US military official told CNN.

The attack killed at least 86 people, including 26 children.

Secretary of State Rex Tillerson told reporters that “steps are underway” to organize an international effort to remove Assad. He called on Russia to “consider carefully” its continued support for the Syrian regime.

When asked whether Russia would reconsider its backing for Assad, Russia’s Foreign Ministry instead challenged the United States to show its cards.

“Russia’s approach to Assad is clear. He is the legal president of an independent state. What is the US approach?” ministry spokeswoman Maria Zakharova told CNN in a text message.

Kremlin spokesman Dmitry Peskov warned against “snap judgments” on what happened in Idlib. “It’s indeed a very menacing course of events, dangerous and horrible crime. However, sticking labels on everyone, prematurely, is not a correct thing to do, in our opinion,” he said.

Russia is Syria’s most powerful ally and has provided the military might behind Assad’s grip on the country, which plunged into civil war six years ago.

At the United Nations, diplomats from the United States, United Kingdom and France circulated a new draft resolution against Syria.

The draft demands that all parties “provide delay-free and safe access to any sites deemed relevant by the OPCW FFM (Organization for the Prohibition of Chemical Weapons Fact Finding Mission).”

The OPCW said its investigation into the Tuesday attack is ongoing.

The draft also emphasizes that the Syrian government is obligated to provide flight logs filed on Tuesday and to arrange requested meetings, including ones with generals or other officers.

The US, UK and France called for a vote on the draft resolution, but no time had been set.

Several countries have now said they believe the Syrian regime carried out the attack, including the United States, Britain, France, Germany and Turkey.

US military and intelligence officials told CNN that Syrian planes dropped bombs at the time and place that the chemical attack was reported to have happened. A US official said radar intelligence followed the radar track of regime airplanes and the infrared heat signature of the bombs.

Syrian Foreign Minister Walid al-Moallem denied the government carried out airstrikes at the time of the attack and repeated the government’s claims it had never used chemical weapons and never would.

He said the government’s first strike happened at 11:30 a.m., about five hours after reports of the chemical attack emerged.

That strike hit a depot holding chemical weapons smuggled into the country by terrorist group Al Nusra Front, he said.

Russia said that the deaths were caused by the Syrian regime strike on the munitions depot. But several chemical weapons experts dismissed Russia’s claims as “chemically impossible” and “laughable.”

The Russian Foreign Ministry said it was “premature to accuse the Syrian government of using chemical weapons in Idlib,” insisting on a full investigation.

Autopsies on three victims conducted in Turkey indicated exposure to chemical substances, Turkey’s Justice Minister Bekir Bozdag said. It’s not yet confirmed what chemical agent was involved in the attack, but early indicators point to the release of a nerve agent like Sarin.

British Prime Minister Theresa May also said the attack would need to be investigated. “If it is the case that it was the Assad regime, it shows the barbarism of the regime,” she said, describing the attack as “despicable.”

And German Chancellor Angela Merkel said the incident was a war crime that must be investigated.

“The chemical attack in Syria was a barbaric attack which must be cleared up,” she said.

No terrorist or rebel group in Syria is believed to have the capacity to carry out aerial strikes.

Mazin Yusif, a 13-year-old-boy, broke down in tears at the Reyhanli Hospital in southern Turkey near the Syrian border, where about 25 victims have been taken for treatment.

“At 6:30 in the morning, the plane struck. I ran up on our roof and saw that the strike was in front of my grandfather’s house,” Mazin told CNN.

He said he ran toward his house and found his grandfather slumped over. He ran outside to call for help. “I got dizzy and then fainted in front of my grandfather’s garage. I next found myself here in this hospital, naked in a bed.”

Another survivor, Ahmed Abdel Rahim, 31, stared vacantly from his hospital bed while explaining he was hit with a poisonous substance carried by three rockets.

“I was in my house. I had difficulty breathing, but I feel better now. But I did throw up after getting to the hospital,” he said. “I don’t know if my family is dead or alive. I don’t know anything.”