The United States launched a military strike Thursday on a Syrian government airbase in response to a chemical weapons attack that killed dozens of civilians earlier in the week.

On President Donald Trump’s orders, US warships launched 59 Tomahawk cruise missiles at the airbase that was home to the warplanes that carried out the chemical attacks, US officials said.

The strike is the first direct military action taken by the US against the regime of Syrian President Bashar al-Assad in the country’s six-year civil war. It represents a substantial escalation of the US military campaign in the region, and could be interpreted by the Syrian government as an act of war.

Six people were killed in the airstrike, according to a televised statement by the Syrian’s Armed Forces General Command. Russia condemned the strike as an “act of aggression,” and Assad’s office Friday called it “a disgraceful act” that “can only be described as short-sighted.”

“Tonight, I ordered a targeted military strike on the air field in Syria from where the chemical attack was launched,” Trump said during short remarks to reporters at Mar-a-Lago, where he ordered the strike just hours earlier. “It is in this vital national security of the United States to prevent and deter the spread and use of deadly chemical weapons.”

He added: “There can be no dispute that Syria used banned chemical weapons, violated its obligations under the Chemical Weapons Convention and ignored the urging of the UN Security Council. Years of previous attempts at changing Assad’s behavior have all failed and failed very dramatically.”

Trump’s decision marked a dramatic shift in his position on whether the US should take military action against the Syrian President’s regime — which Trump opposed during his campaign for president — and came after the President was visibly and publicly moved by the images of this week’s chemical weapons attack.

The strike took place at 8:40 p.m. ET (3:40 a.m. local time), when there would have been minimal activity at the base. It targeted aircraft, aircraft shelters, petroleum and logistical storage, ammunition supply bunkers, air defense systems, and “the things that make the airfield operate,” Pentagon spokesman Capt. Jeff Davis told reporters. The missiles were launched from warships in the Eastern Mediterranean.

“Initial indications are that this strike has severely damaged or destroyed Syrian aircraft and support infrastructure and equipment at Shayrat Airfield, reducing the Syrian government’s ability to deliver chemical weapons,” the Pentagon said in a statement.

A US defense official told CNN Friday morning that an initial battle damage assessment from the strike was that 58 of the 59 missiles “severely degraded or destroyed” their intended target. The official cautioned that this is just the earliest assessment using radar and that more robust assessments using satellites and other surveillance is still pending.

Briefing reporters late Thursday night, Secretary of State Rex Tillerson said that the strike did not represent a “change in our policy or our posture in Syria,” even though it marked the first time the US had decided to take military action against the Syrian government.

“There has been no change in that status,” he said. “It does demonstrate that President Trump is willing to act when governments and actors cross the line … and cross the line in the most heinous of ways.”

Tillerson said the administration felt the strike was “proportional because it was targeted at the facility that delivered this most recent chemical attack.”

The US military also showed reporters Thursday night an image of the radar track of a Syrian airplane leaving the airfield and flying to the chemical strike area Tuesday. A second image of bomb damage craters at the airbase was also shown to reporters at the Pentagon.

Tillerson said the US has a “very high level of confidence” that the Syrian regime carried out at least three attacks in recent weeks — including on Tuesday — using Sarin and nerve gas.

The strikes represented not only an escalation of the US role in Syria, but could have a ripple effect on the US’ relations with the Syrian regime’s powerful backer, Russia.

Russians were present at the base the US struck, a US defense official said, though the role of those Russians was not immediately known.

Tillerson confirmed that the US military contacted their Russian counterparts about the attack ahead of time, in accordance with deconfliction policies between the US and Russia over military activities in Syria. One of the defense officials told CNN the Russians were only given “very brief notice” prior to the strike.

Russian President Vladimir Putin described the US airstrikes on Syria as “an act of aggression against a sovereign state” that “dealt a serious blow to Russia-US relations,” according to a Kremlin statement. Russia said it believed Syria had destroyed all of its chemical weapons and the US strikes were based on a “far-fetched pretext.”

Lawmakers in the US generally supported Trump’s decision to strike back against Assad Thursday night, but cautioned the President against unilaterally starting a war without first consulting Congress.

A pair of defense hawks — Sens. John McCain and Lindsey Graham — who have frequently been critical of Trump, roundly praised his decision Thursday night.

“Acting on the orders of their commander-in-chief, they have sent an important message the United States will no longer stand idly by as Assad, aided and abetted by Putin’s Russia, slaughters innocent Syrians with chemical weapons and barrel bombs,” McCain and Graham said in a joint statement.

But Sen. Rand Paul called on Trump to consult on Congress.

“While we all condemn the atrocities in Syria, the United States was not attacked,” Paul said. “The President needs congressional authorization for military action as required by the Constitution, and I call on him to come to Congress for a proper debate.”

The US began launching airstrikes in Syria in September 2014 under President Barack Obama as part of its coalition campaign against ISIS, but has only targeted the terrorist group and not Syrian government forces.

Trump met with his national security team before his dinner with Chinese President Xi Jinping in Mar-a-Lago Thursday, where he made the decision to pull the trigger on the biggest military action of his presidency, national security adviser H.R. McMaster said.

He sat through dinner with Xi as the action was under way.

Defense Secretary James Mattis has been updating Trump about the missile strikes in Syria following his dinner with Xi, according to a US official.

Mattis, Tillerson and McMaster were with Trump at Mar-a-Lago at the time. Vice President Mike Pence remained in Washington, where he returned to the White House after dinner.

Trump’s order to strike the Syrian government targets came a day after he said the chemical attacks — whose grisly effects were broadcast worldwide where videos captured in the immediate aftermath — “crossed a lot of lines for me” and said he felt a “responsibility” to respond.

“I will tell you it’s already happened that my attitude toward Syria and Assad has changed very much,” Trump said.

“When you kill innocent children — innocent babies — babies — little babies with a chemical gas that is so lethal, people were shocked to hear what gas it was, that crosses many, many lines. Beyond a red line, many, many lines,” Trump said.

Trump’s decision to launch the strikes, the most significant military action of his young presidency, came nearly four years after the US first concluded that Syrian forces had used chemical weapons in Syria.

The Obama administration concluded that Syria had violated the “red line” Obama had set a year earlier in discussing the use of chemical weapons, but ultimately decided against military action against Syria in favor of a Russian-brokered deal to extricate the country’s chemical weapons stockpile.

Trump at the time said the US should “stay the hell out of Syria” and urged Obama on Twitter to “not attack Syria” in the wake of the 2013 chemical attack.

“There is no upside and tremendous downside. Save your ‘powder’ for another (and more important) day,” he tweeted in September 2013.

Trump repeatedly criticized Obama during his presidential campaign for not acting on his “red line” threat, but the real estate mogul also argued against deepening the US’ military involvement in Syria, particularly as it related to Assad.

Trump argued last May in a TV interview that he would “go after ISIS big league,” but said he did not support targeting Assad’s regime, arguing the US has “bigger problems than Assad.”

Syria’s six-year civil war has claimed the lives of at least 400,000, according to a United Nations estimate released a year ago. More than 5 million Syrians have fled the country and more than 6 million more have been displaced internally, according to UN agencies.

But guided by his “America First” ideology and rejection of the US’ propensity for “nation-building,” Trump did not argue in favor of stepped-up US intervention during his campaign for president.

Instead, he signaled the opposite: He argued that the US should remain laser-focused on defeating ISIS and vowed to try and partner with Russia, which has heartily backed Assad’s regime, in order to defeat ISIS and bring the conflict to an end.

Those views appeared steeped in his longstanding criticism of the Iraq War, which he called a “stupid” decision, lamenting the billions of dollars funneled toward that war effort instead of on domestic programs, like infrastructure spending.

While Trump rejected the isolationist label some placed on him during the campaign, he made clear that his preference was for limiting the US footprint around the world and refocusing US foreign policy around core national security interests. 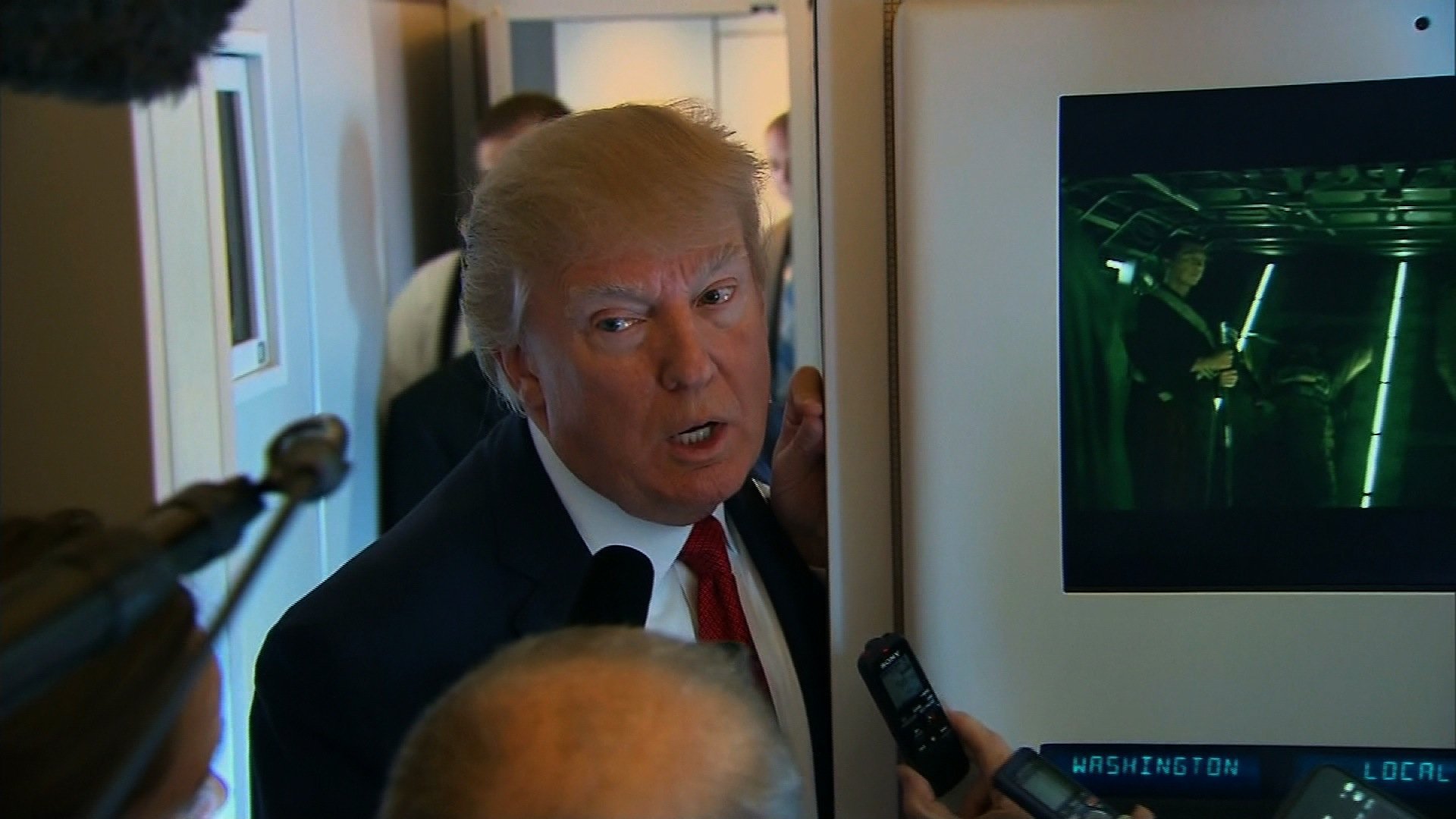