CENTERVILLE, Utah -- A man will be booked into jail after leading police on a car chase in a stolen truck with stolen plates on Tuesday.

Officers responded to the Cyprus Credit Union inside the Centerville Walmart after a possible forgery just before 4 p.m., a press release said.

An officer found Johnson a while later and did a traffic stop near I-15 northbound in the Centerville area. The suspect stopped, then sped off into the emergency lane when detectives attempted to approach his truck, the press release said.

Officials said they were able to locate Johnson about 30 minutes later in a residential area of Farmington near 200 North and 300 East.

According to the press release, Johnson was told to exit the truck, but he refused, fled in his truck and hit a parking car. He continued onward and led officers on a chase, the press release said.

Officers followed the suspect to a dead-end road near Lagoon at 300 North, west of Main Street, according to officials, so the officers blocked the only exit to the suspect off.

The press release said Johnson turned back toward the police and drove into a Farmington police vehicle in a head-on collision and successfully exited back onto Main Street from 300 North.

As the suspect continued to drive, a Davis County deputy conducted a PIT (Pursuit Intervention Technique) maneuver on the suspect near Park Lane in Farmington, but the truck evaded the maneuver and continued away from the police, officials said.

Johnson was eventually captured when he lost control of his truck, just south of Shepard Lane, officials said.

According to the press release, the suspect rammed into a mailbox, sped through a grassy median and hit a parked car.

Johnson attempted to flee, again, but by this time officials had already boxed him in with emergency vehicles, officials said.

Officers were able to take the suspect into custody with no injuries to him or the officers, according to the press release.

Charges are still up to be determined for Johnson, but will likely be forgery, evading, aggravated assault on an officer, possession of a stolen vehicle and stolen plates, the press release said.

Johnson was booked into the Davis County Jail, officials said. 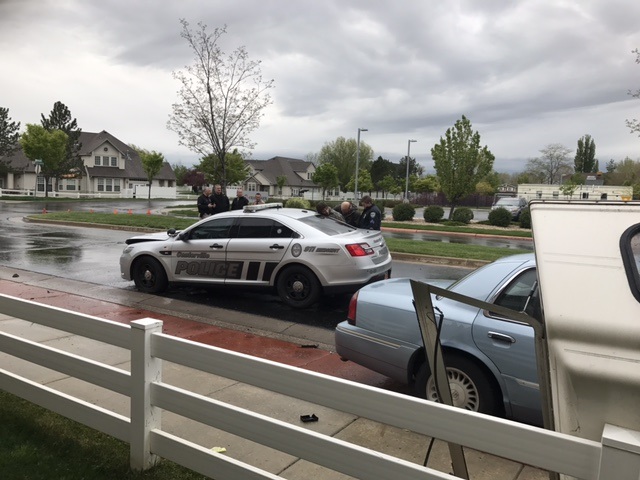