SPANISH FORK, Utah — A police officer patrolling a Wal-Mart parking lot in Price spotted suspicious activity that resulted in the arrest of two men suspected in a bank robbery in Spanish Fork.

A Wells Fargo bank at 251 East 1000 North was robbed Saturday just before 10:30 a.m., according to the Spanish Fork Police Department.

The suspect handed a note to the teller and demanded cash, police said. The word “gun” was printed on the note but no handgun was shown.

Police said the suspect fled on foot southbound with an undisclosed amount of cash.

A police officer was patrolling a Wal-Mart parking lot in Price around 1:30 p.m. Saturday and observed two people who appeared to be trying to hide inside their vehicle to avoid the officer.

When the two men eventually drove out of the parking lot, the officer followed and made a stop for a traffic offense. According to police, both suspects gave the officer false names and were subsequently arrested.

Police searched the vehicle and found several $50 and $100 bills as well as a note matching the description of the one used by the suspect in Spanish Fork.

Police say 23-year-old Nicholas R. Mobley of Denver is the man who robbed the bank in Spanish Fork. The other suspect apprehended in Price, 25-year-old Gregorio Efrain Gomez of Grand Junction, is believed to have driven Mobley from the scene of the robbery.

Both suspects have been booked into the Utah County Jail and face robbery charges. 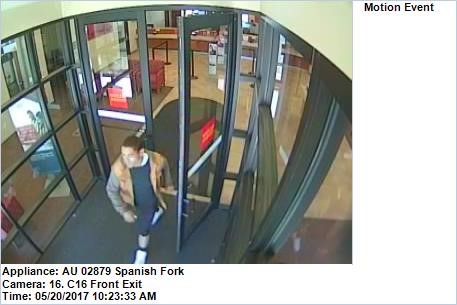