‘Drive them out’: Trump calls on Muslims to share burden in terror fight

RIYADH, Saudi Arabia (CNN) — President Donald Trump looked to make clear that the United States is not at war with Islam in a major speech here on Sunday, instead defining the battle against terrorist groups as a “battle between good and evil” as he urged Muslim-majority countries to redouble their counterterrorism efforts.

In a departure from the Islamophobic rhetoric he sometimes deployed on the campaign trail, Trump acknowledged that the overwhelming majority of victims of terrorism are Muslim, calling Islam “one of the world’s great faiths.” He also dismissed “Islamists” as the “footsoldiers of evil,” with no religious legitimacy, effectively putting distance between Islam and the ideology that fuels terrorist groups like ISIS.

While Trump promised that he was “not here to lecture” the Muslim world, his speech went beyond outreach. In his most forceful argument on Sunday, Trump exhorted Muslim-majority countries to do more to eradicate terrorist groups that claim the mantle of Islam, urging Muslims to “drive out” terrorists.

Middle Eastern countries “cannot wait for American power,” Trump said, but must instead “decide what kind of future they want for themselves, for their countries, and for their children.”

The major speech, which Trump delivered Sunday during an Arab-Islamic-American summit in Riyadh to leaders of 55 Muslim-majority countries, marks Trump’s first effort to reach out to the world’s 1.6 billion Muslims worldwide. The speech was aimed at resetting his relationship with the Muslim world after making a slew of Islamophobic remarks on the campaign trail, calling for a ban on Muslims and declaring “Islam hates us.”

The speech came as the Trump administration defends his executive order banning visitors from six Muslim-majority countries, which was blocked in federal court. The order has been criticized as an attempt for Trump to legally implement his Muslim ban.

Despite his toned down rhetoric, Trump warned the leaders gathered in Riyadh on Sunday that inaction on their part would bring “suffering, death, despair” and listed a series of actions Muslim countries must take to win the battle against terrorists.

“We can only overcome this evil if the forces of good are united and strong and if everyone in this room does their fair share and fulfills their part of the burden,” Trump said. “Muslim majority countries must take the lead in stamping out radicalization.”

Trump sought to disassociate terrorism from religion, but urged Muslim majority countries to “honestly” confront “the crisis of Islamic extremism and the Islamists and Islamic terror of all kinds.

Trump, who wants to accelerate the fight against ISIS in Iraq and Syria, signaled Sunday that he understands he needs a more constructive relationship with Muslim countries if he hopes to succeed in his stated goal of destroying ISIS and other terrorist groups.

He highlighted that “in sheer numbers, the deadliest toll” of terrorist attacks “has been exacted on Arab, Muslim and Middle Eastern nations.”

“More than 95% of the victims of terrorism are themselves Muslim,” he said.

Trump’s comments came after he ticked down a list of major terrorist attacks in the US and also noted that Europe has “also endured unspeakable horror.” 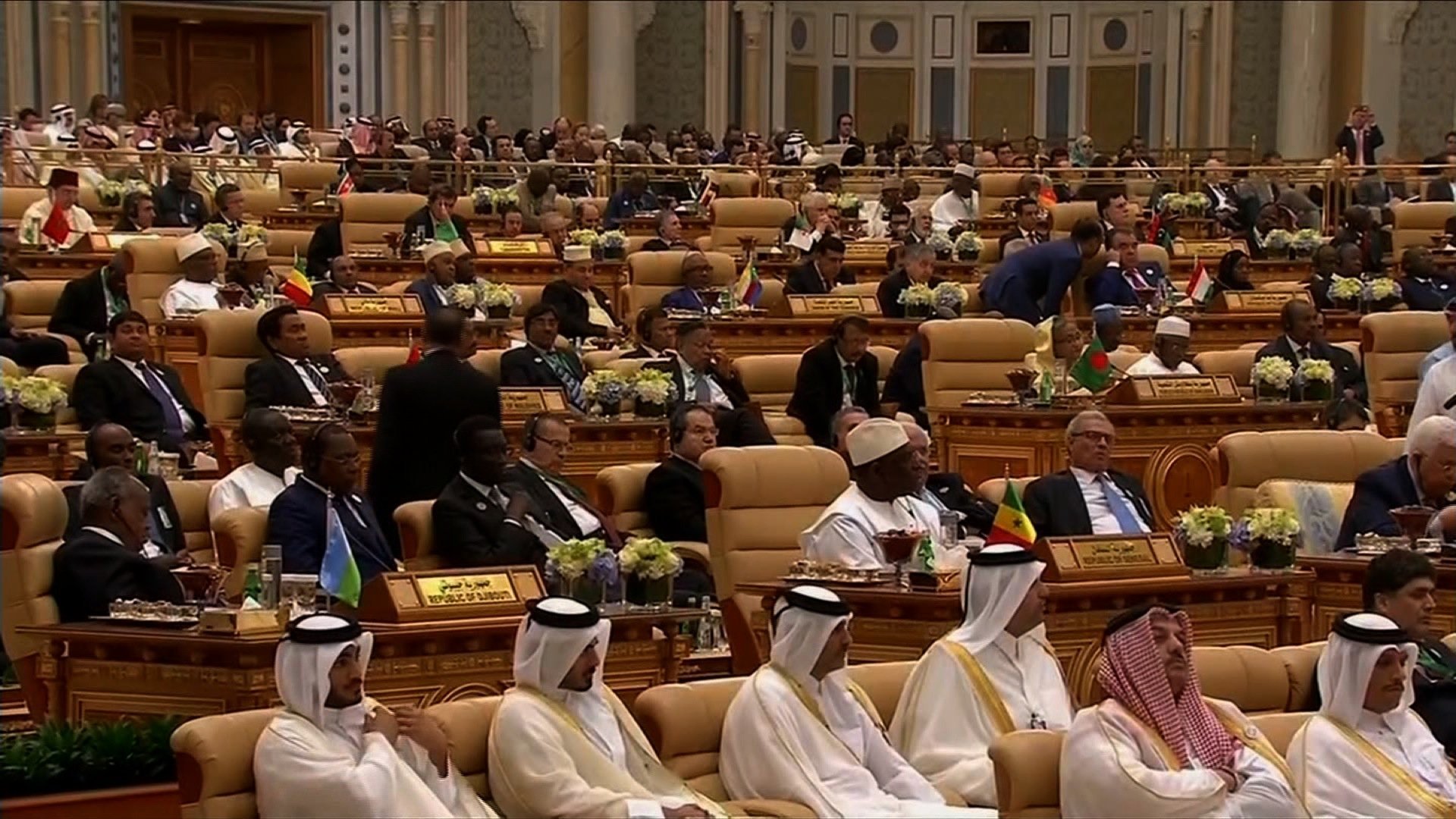