TOQUERVILLE, Utah — An elderly man and his adult son are displaced after a fire destroyed their home on Saturday morning.

Firefighters and emergency personnel responded to a house fire just before 11 a.m. from a home on South Ashcreek Drive, officials said.

Witnesses to the fire said they first noticed it because of a noise coming outside the home and then saw flames spilling out from the roof and rear of the buildings, officials said.

Officials said the first of the fire crews were on scene in four minutes, but by the time Hurricane Valley Fire Chief Tom Kuhlmann arrived on scene seven more minutes passed and the entire structure was aflame.

Kuhlman said the delay happened because of motorists who failed to let the fire trucks pass. Kuhlmann said that happens often.

“Unfortunately it’s very common, and even with this fire, I was delayed several minutes by cars who wouldn’t pull over and impeded our progress to the scene,” Kuhlman said.

The cause of the fire is unknown and is currently under investigation, according to officials.

The story was originally posted on St. George News. 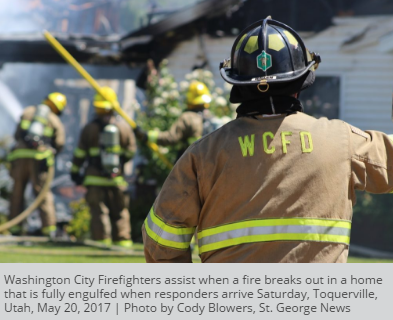