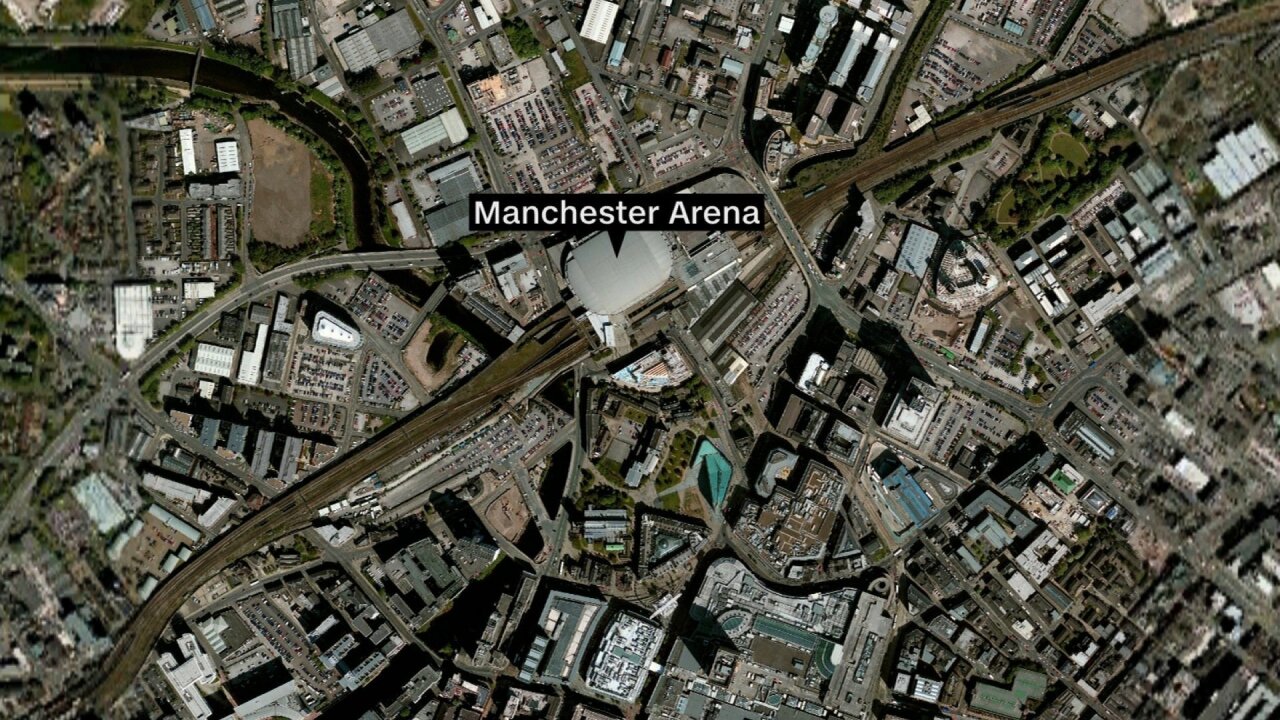 Police in Manchester, England, warned people to stay away from Manchester Arena after reports of two loud explosions during an Ariana Grande concert Monday night on May 22, 2017. People are seen here moving out of the arena.

MANCHESTER, England — Police identified 22-year-old Salman Abedi as the suspected suicide bomber who detonated bombs as throngs of teenagers poured out of an Ariana Grande concert in Manchester that killed 22 people.

The suspect carrying explosives acted as a lone attacker and died in the blast Monday night, which left the wounded and the dead scattered across the arena’s bloodied entrance and sent screaming girls running for cover, according to police.

Greater Manchester Chief Constable Ian Hopkins named the suspect Tuesday but said that the man’s identity had not been yet confirmed by a coroner.

The blast marked the deadliest terror attack on British soil since the 2005 London bombings.

ISIS claimed responsibility for the attack but offered no evidence.

An 8-year-old girl and an 18-year-old woman have been named as the first victims of the attack, which has drawn condemnation and horror from around the world as a heinous assault targeting children.

ISIS said on its Telegram channel Tuesday that a “soldier of the caliphate” was able to “plant explosive devices” at the arena, a US counter-terrorism source told CNN. ISIS routinely claims attacks it has no proven links with.

But authorities have discovered no evidence of a link between the attacker and an established terror group, a British counterterrorism official told CNN.

No determination has been on the sophistication of the explosive device or what chemicals were involved, the official said.

Video from inside the arena showed girls screaming as they scrambled over chairs and railings to escape the 21,000-seat venue, while photographs showed bodies laying bloodied on the floor.

Speaking after an emergency Cabinet meeting, British Prime Minister Theresa May condemned the attack as “callous” and “cowardly.”

“We struggle to comprehend the warped and twisted mind that sees a room packed with young children not a scene to cherish but as an opportunity for carnage,” May said in London, before leaving for Manchester.

Eight-year-old Saffie Rose Roussos from Leyland has been named as one of the fatalities, the Lancashire County Council confirmed.

Chris Upton, the head teacher at the Tarleton Community Primary School, described her as “simply a beautiful little girl” who was “quiet and unassuming with a creative flair.”

Georgina Callander, 18, was also killed, according to her school, the Bishop Rawstorne Church of England Academy.

“All of our students will gather together today for a time of prayer and reflection and to give thanks for the life of Georgina,” the school said.

At least 12 victims aged 16 or under were being treated at a children’s hospital for serious injuries, some of them fighting for their lives, a Manchester health official said.

Grande, who had just finished the first of three scheduled UK performances, tweeted about her devastation several hours later: “broken. from the bottom of my heart, i am so so sorry. i don’t have words.”

The pop star has suspended her “Dangerous Woman” tour following the attack, a source with knowledge of the situation told CNN. Grande was scheduled to perform in London and across Europe through mid-June.

Queen Elizabeth II said Tuesday that “the whole nation has been shocked.”

“I would like to express my admiration for the way the people of Manchester have responded, with humanity and compassion, to this act of barbarity,” she said.

‘Darkest of nights’ in Manchester

Britain has been under a “severe” terror threat alert for three years and there has been an uptick in terror-related arrests in recent months.

Police have warned that another attack was likely after a man plowed his car into a crowd on London’s Westminister Bridge in March and stabbed a policeman, in an attack that left six dead.

Monday’s bombing has raised concerns that a more sophisticated network may exist in the country.

Greater Manchester Mayor Andy Burnham described the attack as “our darkest of nights.”

“These were children, young people and their families that those responsible chose to terrorize and kill. This was an evil act,” he said.

Around 400 police were deployed overnight following the attack, and on Tuesday, large groups of armed police were seen at several parts of the city. Security has also been boosted in London.

People began paying their respects to the victims on Tuesday afternoon. A family of four arrived at St Ann’s Square in the city center with a huge bouquet of flowers and colorful balloons.

“I’m just feeling really down for all the families that lost their children and family members,” said Michael Heveril.

“It’s quite close to home — I never thought anything like this would ever happen in Manchester.”

The explosion rocked the arena at around 10:30 p.m. (5:30 p.m. ET), and the sound of wailing sirens cut through the smoky aftermath.

Manchester resident Charlotte Campbell told CNN she waited for news on her 15-year-old daughter, Olivia. “We’ve tried everything we can. They’re telling us to wait by the phones,” she said.

Olivia had gone to the concert with a friend and neither have been in contact. Her father was looking for the girls.

“I want her home and I want her safe. … I just want her to walk through the door.”

US President Donald Trump slammed the attack, saying that terrorists were “losers.”

“So many young beautiful innocent people living and enjoying their lives murdered by evil losers in life. I won’t call them monsters because they would like that term. They would think that’s a great name. I will call them from now on losers because that’s what they are,” he said.

“This wicked ideology must be obliterated.”

A US Department of Homeland Security statement said it was “closely monitoring” the situation.