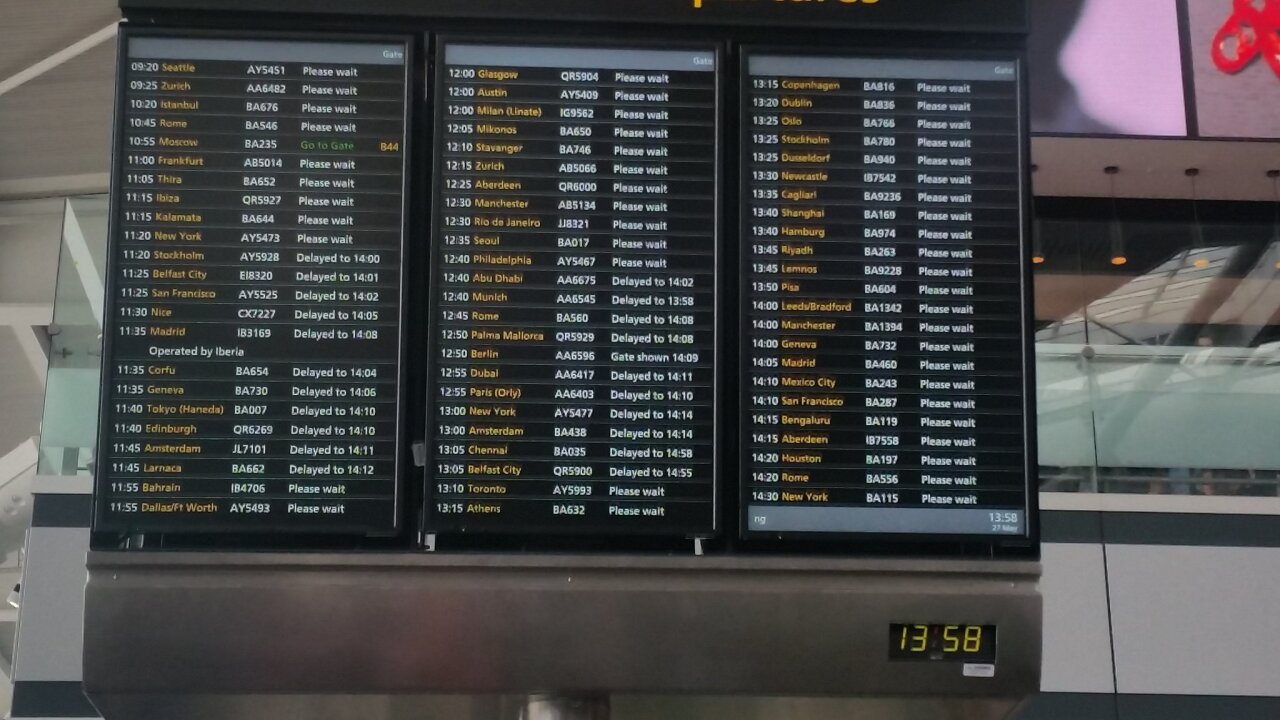 The departure board at Heathrow airport due to British Airways IT system failure.

“Our IT teams are working tirelessly to fix the problems,” British Airways CEO Alex Cruz said in a video posted on Twitter.

“We believe the root cause was a power supply issue and we have no evidence of any cyberattack.”

The airline initially canceled only flights before 1 p.m. ET (6 p.m. BST) at Heathrow and Gatwick.

“We are working hard to get our customers who were due to fly today onto the next available flights over the course of the rest of the weekend,” the airline said in a statement Saturday afternoon. “Those unable to fly will be offered a full refund.”

The system outage — on Britain’s spring bank holiday weekend — has “affected our call centers and our website but we will update customers as soon as we are able to,” the airline said.

“We are extremely sorry for the huge inconvenience this is causing our customers and we understand how frustrating this must be, especially for families hoping to get away on holiday,” Cruz said.

British Airways has not outlined how many flights were canceled, nor how many people were affected.

“Most long-haul flights due to land in London tomorrow (Sunday, May 28) are expected to arrive as normal, and we are working to restore our services from tomorrow, although some delays and disruption may continue into Sunday,” the statement said.

In response to tweets from travelers, the airline said it was experiencing a “global system outage” affecting its website, online check-in, contact centers and baggage tracing.

“Working on this as a matter of priority, but if your flight is departing tomorrow you may have to complete check in at the airport,” it tweeted to one customer.

Travelers in the United Kingdom were already reporting disruptions, including baggage and flight delays, when the airline reported serious computer problems around midday.

Paddy Anigbo, a Nigerian national visiting his wife in the United Kingdom on their wedding anniversary, said his plane sat on the tarmac at Heathrow for about four hours after landing. The plane’s entertainment system and air conditioning were operating, and free snacks and drinks were served.

But, he told CNN by phone: “No alcohol, which is wise. You don’t want that kind of chaos.”

“There’s no real frustration,” Anigbo, an IT specialist, said while still on the tarmac. “I mean, the frustrations are there. We all want to get off the plane and go home.”

Anigbo praised the flight crew and lamented that the pilot, at one point, announced that he would give hourly updates.

“What’s pretty clear is that the situation in the terminal is quite serious and the IT systems are being worked on and this is going to take a while,” he said.

When Anigbo’s plane finally reached the gate, he described the scene as “chaos.”

“We don’t even know where to pick up our luggage,” he said.

Gareth Ebenezer, who was on his way to Dublin to watch a rugby union final, told CNN he gave up and went home after getting caught up in the chaos at Heathrow.

Ebenezer saw lots of slow-moving lines, with some people asked to wait outside Terminal 5, he said. Most travelers seemed resigned, he said, though others appeared stressed and some children were crying.

Most people were being rebooked on Sunday flights, he said, but by then, he’d already have missed his match.

“BA staff were slow on announcements and updates, and were bringing out cordons and bottles of water to manage queues,” Ebenezer said. “They seemed incapable of doing anything else, despite their best intentions, due to the system outage. They were totally crippled.”

Some stranded passengers took to Twitter to voice their frustrations.

“Stuck at Heathrow Terminal 5. No updates or staff around,” travel writer and blogger @WildWayRound tweeted. “Have been stuck in a plane for 1 hour, and now at the airport for 2.”

Staff couldn’t find her baggage, including the gear she needs for a marathon Sunday, she said.

“Long line of planes on the tarmac,” tweeted Don Bowman of North Carolina, adding that he’d seen only one plane leave Terminal 5 in the previous hour.

Filmmaker Philip Bloom tweeted that he was stuck on the tarmac at Heathrow after his delayed flight from Belfast, Northern Ireland, finally landed because there was no space for the aircraft to park.

Bloom later tweeted, “9 hours after checking in at Belfast airport we get home after the chaos of the British Airways IT crash.”

Computer glitches and outages have plagued BA and other airlines in recent months.

In September, British Airways said a computer problem in its check-in systems caused delays and long lines at numerous airports.

Delta was hit by a global computer outage one month earlier that caused days of travel chaos, including about 2,000 flight cancellations.

And in July, Southwest Airlines canceled more than 1,000 flights following a system failure.

CNN’s Stephanie Busari and Simon Cullen contributed to this report.