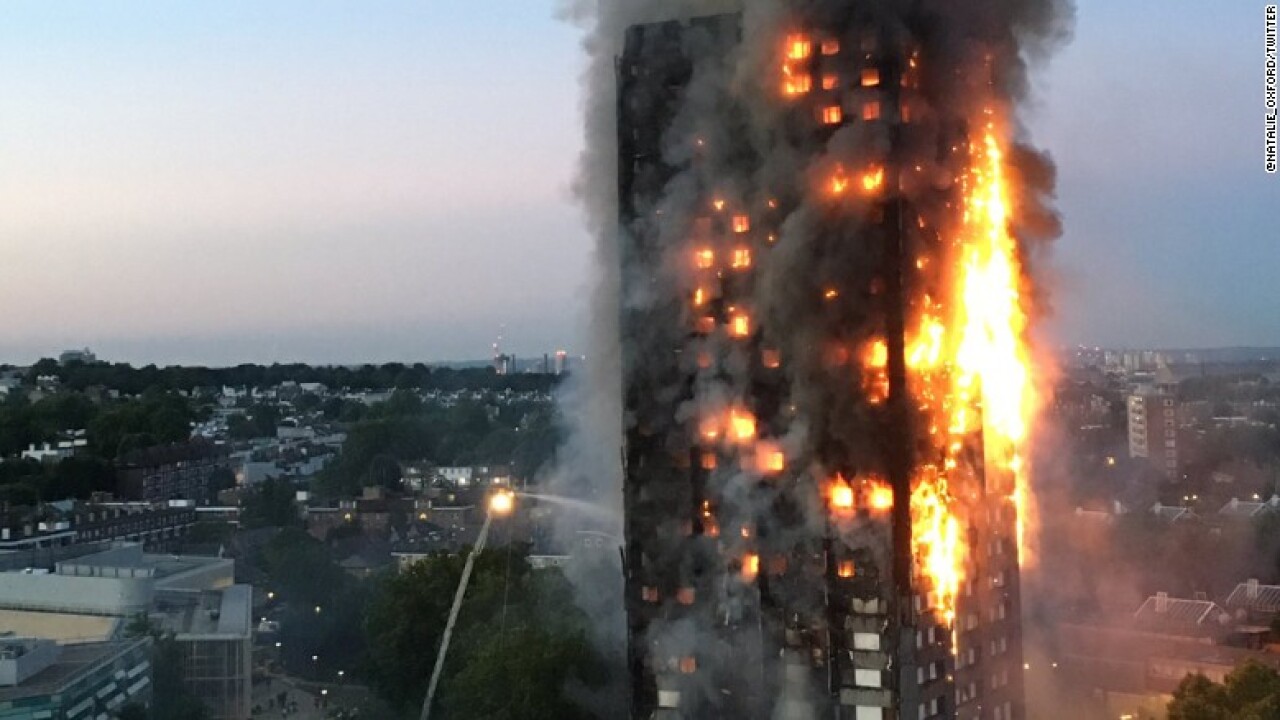 British police say they may never be able to identify all of those who perished in the Grenfell Tower disaster, as anger and frustration mounted in the London neighborhood stunned by the tragedy.

A criminal investigation has been launched into the circumstances surrounding the blaze. Firefighters continued to pick their way through the burnt-out wreckage of the building Friday.

Dozens of people remain missing after fire rapidly engulfed the 24-story building in the early hours of Wednesday morning. Police said on Friday that 30 people were confirmed to have died.

Relatives and friends of the missing made increasingly desperate appeals for information, as it became increasingly clear that few are likely to have survived.

Queen Elizabeth II and the Duke of Cambridge visited the area to meet residents and community representatives on Friday.

Prime Minister Theresa May faced criticism for failing to meet residents when she made a low-key visit ot the scene Thursday. Her government, already weakened after losing its parliamentary majority in elections last week, has been slammed for a faltering response.

May has announced a public inquiry into the disaster.

Metropolitan Police Commander Stuart Cundy said there was “a risk that sadly we may not be able to identify everybody”. Authorities say 24 people remain in hospital, 12 of whom are in critical care.

Police said on Friday that they had identified the place where the fire originated, and disclosed that it was unlikely to have been started deliberately.

The names of those who lost their lives are beginning to be made public.

One of those was Gloria Trevisan, a 26-year-old Italian architect who was living in London because her family was having financial difficulties at home in Italy.

A lawyer for the family told CNN that Trevisan was able to speak with her parents before she died, telling them: “I am going to heaven. I will help you from up there.”

On Thursday, Mohammad Al-Hajali, 23, a refugee who fled Syria for the UK in 2014, was announced as the first victim of the fire.

Mohammad and his brother Omar, both students, lived together in a 14th-floor apartment in Grenfell Tower.

Omar, 25, survived, but the brothers were separated as firemen tried to rescue them from burning building early Wednesday.

Many residents blame the fire’s rapid spread on cladding fitted to the outside of the tower in a recent refurbishment.

According to the Times of London, the cladding’s manufacturer said its use is banned in the US on high-rise buildings “because of the fire and smoke spread.”

There are also questions over why no sprinklers were fitted during the 2015/16 refurbishment of the building, which would have cost £200,000, according to the British Automatic Fire Sprinkler Association .

Nicholas Paget-Brown, leader of the Royal Borough of Kensington and Chelsea, which owns the building, told the BBC that sprinklers were not fitted “because that would have delayed and made the refurbishment of the block more disruptive.”

He added that the cladding fitted to the outside of the tower — and blamed by many residents for helping spread the fire — would not be used again.

Warned of the danger

Originally constructed in 1974, the residential tower block recently underwent a $13.2 million (£10.3 million) refurbishment. But multiple residents told CNN they did not hear fire alarms when the blaze broke out and many survivors said the fire spread quickly with little warning.

Residents had complained about safety for several years.

In November, the Grenfell Action Group highlighted ongoing concerns among residents over the safety of the tower, managed by the Kensington and Chelsea Tenant Management Organisation on behalf of the borough.

The group’s blog post argued that only “a catastrophic event will expose the ineptitude and incompetence of our landlord … and bring an end to the dangerous living conditions and neglect of health and safety legislation that they inflict upon their tenants and leaseholders.”

The management company acknowledged residents’ concerns in a statement: “It is too early to speculate what caused the fire and contributed to its spread. We will cooperate fully with all the relevant authorities in order to ascertain the cause of this tragedy. … We are aware that concerns have been raised historically by residents. We always take all concerns seriously and these will form part of our forthcoming investigations.”

The UK government has promised that all those made homeless by the disaster will be rehoused in the local area. But the government has been criticized for failing to act on recommendations from previous tower block fires.

The Prime Minister is facing particular scrutiny over the role of her new chief of staff, Gavin Barwell, who served as housing minister until he lost his seat in last week’s snap general election.

Barwell had told lawmakers that the government intended to review fire safety standards following a deadly blaze at the Lakanal House high-rise building in south London in 2009, in which three women and three children died. In that case, exterior paneling helped the fire spread.

Jim Fitzpatrick, an MP with the main opposition Labour Party, slammed the Conservative-led government for shuffling its feet on the review.

He said that he and a parliamentary group that he chairs have been pushing for better safety regulations since the 2009 fire.