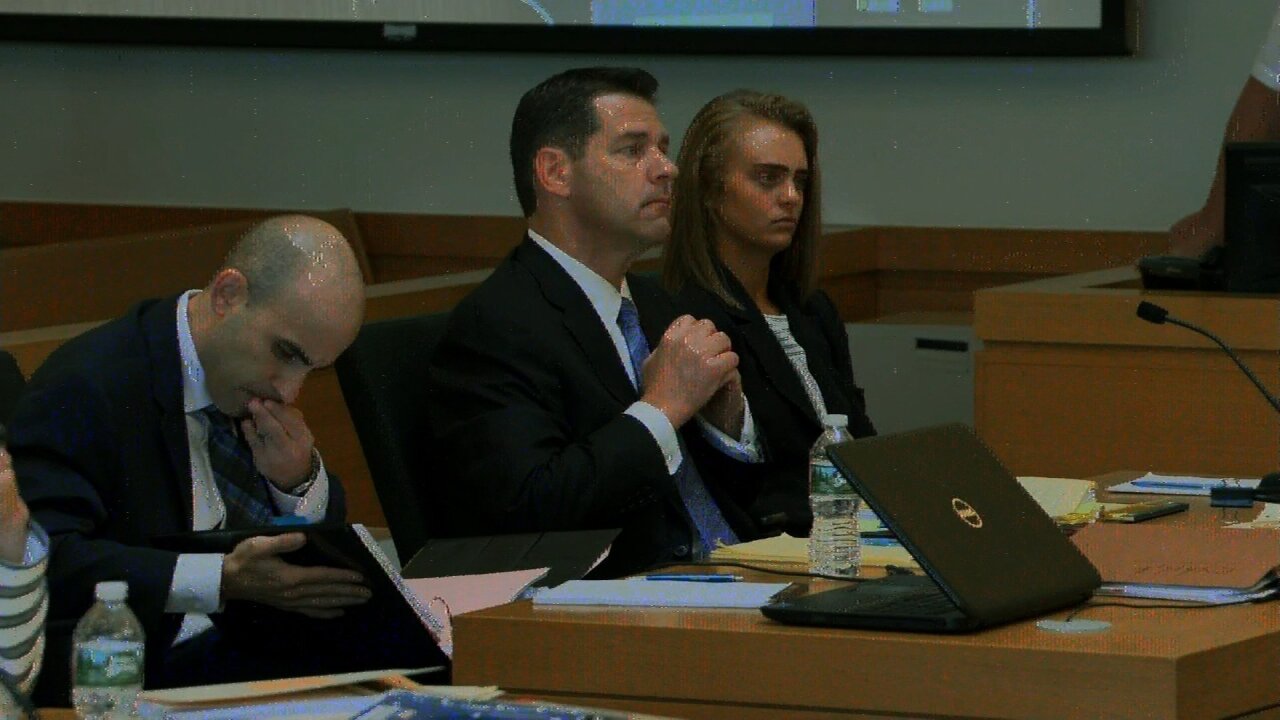 Michelle Carter (seated right) is on trial for allegedly encouraging her boyfriend to commit suicide.

In a case that hinged largely on a teenage couple’s intimate text messages, Michelle Carter was found guilty of involuntary manslaughter Friday in the 2014 death of her boyfriend, who poisoned himself by inhaling carbon monoxide in his pickup truck, a Massachusetts judge ruled.

Carter’s own words — preserved in hundreds of text messages presented as evidence over six days of testimony — helped seal her conviction in the death of 18-year-old Conrad Roy III, Bristol County Juvenile Court Judge Lawrence Moniz said during a 15-minute explanation of his rationale.

“She admits in … texts that she did nothing: She did not call the police or Mr. Roy’s family” after hearing his last breaths during a phone call, Moniz said. “And, finally, she did not issue a simple additional instruction: Get out of the truck.”

Carter, 20, cried silently as Moniz spoke. She stood to receive the ruling, which could set legal precedent for whether it’s a crime to tell someone to commit suicide.

‘There are no winners here’

Prosecutors had argued that Carter sent Roy numerous text messages urging him to commit suicide, listened over the phone as he suffocated and failed to alert authorities or his family that he’d died. The judge agreed.

“This court has found that Carter’s actions and failure to act where it was her self-created duty to Roy since she put him in that toxic environment constituted reckless conduct,” the judge said. “The court finds that the conduct caused the death of Mr. Roy.”

With Carter standing, Moniz said, “This court, having reviewed the evidence, finds you guilty on the indictment with involuntary manslaughter.”

Although Cater was not present when Roy killed himself, her text messages and conversations with him proved damning.

One July 2012 exchange of texts messages was typical:

Roy’s relatives, who sat near Carter in the front row of the courtroom, wept as the judge ticked through the steps Roy took to end his life, as well as Carter’s complicity. Sitting opposite them, Carter’s family members also sobbed.

“Although we are very pleased with the verdict, in reality there are no winners here,” prosecutor Katie Rayburn told reporters later. “Two families had been torn apart and will be affected by this for years to come. We hope verdict will bring some closure… It’s been an extremely emotionally draining process for everyone involved.”

Roy aspired to be a tugboat captain and would be alive if not for Carter’s actions, Rayburn said. He had been trying to better himself, and “we all wish he had the opportunity” to grow up, she said.

Added Roy’s father, Conrad Roy Jr.: “This has been a very tough time for our family, and we would just like to process this verdict that we are happy with.”

Moniz let Carter, who was tried as a juvenile because she was 17 at the time of the crime, remain free on bail until her sentencing on August 3. She could face up to 20 years in prison, though experts say such a lengthy sentence is unlikely.

She was ordered to have no contact with members of the Roy family. She cannot apply for or obtain a passport, nor can she leave Massachusetts without permission from a judge.

The ruling, which may spur lawmakers to codify the behavior highlighted in the case as criminal, was closely watched by legal experts.

“Given the expansive definition of manslaughter under Massachusetts law, the guilty verdict is not a surprise,” CNN legal analyst Danny Cevallos said.

“Still, this verdict is concerning because it reflects a judicial willingness to expand legal liability for another person’s suicide, an act which by definition is a completely independent choice,” he said. “Historically, suicide has been considered a superseding act which breaks the chain of legal causation.”

In charging Carter with involuntary manslaughter, prosecutors were threading a legal needle, another legal expert said.

“I thought it was a square peg in a round hole, it wasn’t a great fit for manslaughter,” Daniel Medwed, professor of law and criminal justice at Northeastern University, said after the decision. “Her behavior was so morally reprehensible, but I wasn’t sure how, as a matter of law, it constituted as manslaughter.”

Medwed said manslaughter involves direct action such as a drunk driver who slams into a car or someone who fires a gun into a crowd to recklessly cause a death.

“This case involves mainly words, but ultimately [Roy] decided to do the deed, so it didn’t fit in with the classic patter of manslaughter,” he said. “But the facts are so powerful, so compelling and her behavior so apparent that I’m not shocked she got convicted for manslaughter.”

Carter secretly nudged Roy toward suicide by sending him numerous text messages encouraging him to take his life, prosecutors said.

In closing arguments Tuesday, prosecutors said Carter berated her vulnerable boyfriend when he had second thoughts about killing himself, listened by phone as he died and used his suicide to get from friends the attention that she desperately craved.

Carter went from offering “words of kindness and love” to aggressively encouraging Roy via text message to carry out longtime threats to commit suicide, Rayburn told the court.

Rayburn reminded the judge of text messages in which Carter encouraged Roy to get back in the truck. In text messages to a friend, she described hearing his final words and breaths on the phone.

Roy’s body was found July 13, 2014, a day after his suicide in his parked truck in a Kmart parking lot in Fairhaven, nearly 40 miles from his home.

‘Tragic … not a homicide,’ defense said

Carter’s attorney argued she was a troubled, delusional young woman who was “dragged” into the suicidal journey of Roy, who had long been intent on killing himself.

“The evidence actually established that Conrad Roy caused his own death by his physical actions and by his own thoughts,” defense attorney Joseph Cataldo said. “You’re dealing with an individual who wanted to take his own life. … He dragged Michelle Carter into this.”

Carter was “overwhelmed” by Roy’s talk of suicide while at the same time dealing “with all of her baggage,” including the side effects of medication for depression, Cataldo said.

Earlier in the trial, a psychiatrist testified that Carter was delusional after becoming “involuntarily intoxicated” by antidepressants. She was “unable to form intent” after switching to a new prescription drug months before Roy’s suicide, and she even texted his phone for weeks after he died, the psychiatrist testified.