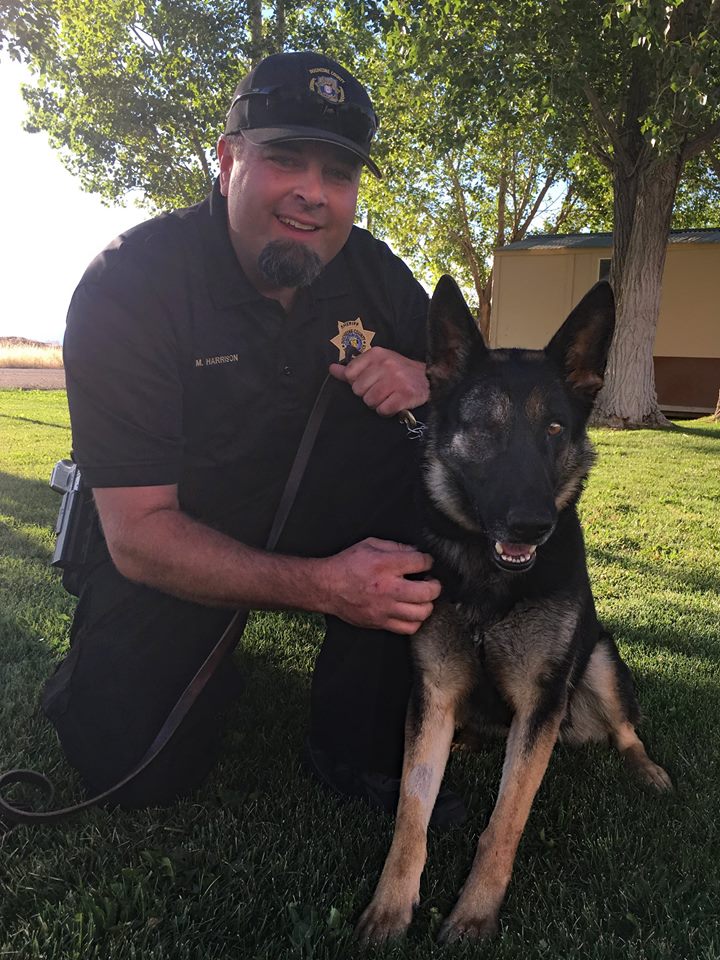 DUCHESNE COUNTY, Utah – A Duchesne County K-9 is retiring after a veterinarian diagnosed it with cancer.

The vet said “Q” likely has months to live.

The Duchesne County Sheriff’s Office has medically retired one of its two K-9s due to a terminal cancer diagnosis that has already cost the dog her right eye.

Cpl. Morant Harrison took his K-9 partner Q to a veterinarian earlier this summer to have her treated for a chipped tooth. During the visit, Harrison and the vet noticed that the 2-year-old German shepherd’s right eye appeared to be swollen.

The vet provided Harrison with a treatment plan for the eye, but Q’s condition continued to worsen, prompting the vet to refer Q to a specialist on the Wasatch Front.

“They thought maybe a foreign substance had gotten into her eye,” Harrison said. “I thought this would be something we could fix.”

The specialist informed Harrison that Q’s eye needed to be removed immediately. Tests on tissue samples collected during the surgery revealed that Q has “a fast-acting, very aggressive form of cancer,” Harrison said.

“There’s no real treatment for it,” he said. “She’s not going to make it more than a month or so before we’re going to have to put her down.”

Harrison was first partnered with Q about a year ago, after receiving her from Oquirrhberg Kennels. The Tooele-based kennel imported Q from Germany, he said.

“She came named with a big really long (name) – Quickstop something or other – and I couldn’t remember that when I was giving her commands, so I just shortened it to Q,” Harrison said.

“We’ve basically lived together for the past year,” he added. “With all the trainings we’ve had to go through, she’s stayed in hotels with me. We’ve spent a lot of nights just me and her.”

Q was recently certified as a dual purpose K-9, trained in narcotics detection as well as patrol functions, such as tracking and apprehending suspects. She excelled at finding drugs, Harrison said.

“She found some decent loads,” he said. “She’s well-known throughout the K-9 community for having a great nose.

“I like knowing that if I send her on a car and there’s dope in there, she’s going to find it,” Harrison said. “To me she is the best narcotics dog in the area.”

Unlike many police K-9’s, Q is a very social dog. Harrison has never had to muzzle her when taking her into area schools and his four children are able to play with her when she’s off-duty.

“She’s never shown any aggression unless I’ve given her a command,” Harrison said. “She’s made it very easy to be a handler.”

The veterinarian caring for Q has given Harrison a list of signs and symptoms to help him identify when Q’s cancer has returned and is causing her pain. When that happens, Q will be euthanized and buried with police honors on Harrison’s small farm.

“My wife and kids are very sad right now, and I’m not taking it too well, as you can imagine,” Harrison said.

Q’s retirement leaves Kimber – a Belgian Malinois handled by Sgt. Jared Harrison – as the lone K-9 working for the sheriff’s office. Acquiring a new K-9 can cost up to $10,000, which does not include the cost of equipment and training for the handler. The sheriff’s office is currently exploring all options for adding another K-9 in the near future.