TOOELE, Utah — Police in Tooele booked a man into jail Wednesday on a charge of aggravated arson after authorities responded to two field fires.

According to a press release from Tooele City, a field fire broke out around 3 a.m. near 70 West Drysdale in Tooele, and some utility boxes in the field were damaged during the fire.

About an hour after that fire, a second blaze broke out in the same area.

Lloyd was booked into the Tooele County Jail and faces a charge of aggravated arson.

Police are also asking for the public’s help in solving two open cases regarding suspicious fires, though at this time there is no evidence linking those fires to Wednesday’s incident.

One August 21, a small grass fire broke out in the are of Peterson Industrial Depot, 545 North Lodestone Way. As officers responded, a second and third fire were reported in the area.

Surveillance images showed a gray pickup truck in the area at the time the fires began. The vehicle is believed to be a 4-door Chevrolet Silverado with a rear sliding window. The truck is pictured below. 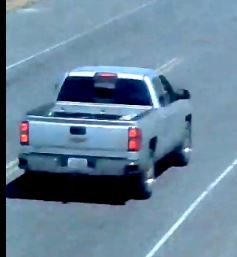 On June 1, police responded to Overlake Elementary School, 2052 North 170 West, on a report of a playground fire. Crews extinguished the blaze but the damage to the playground was extensive. Witnesses reported seeing a gray pickup truck leaving the area in that case.

“At this time, police do not have clear evidence relating [Wednesday’s] arrest to the Overlake or Peterson fires,” the release states. “Police are still investigating the potential that the Overlake and Peterson cases may be related.”

Anyone with information about the vehicle or the fires is asked to call Tooele County Dispatch at 435-882-5600.