Rescued women back on land after five months adrift at sea 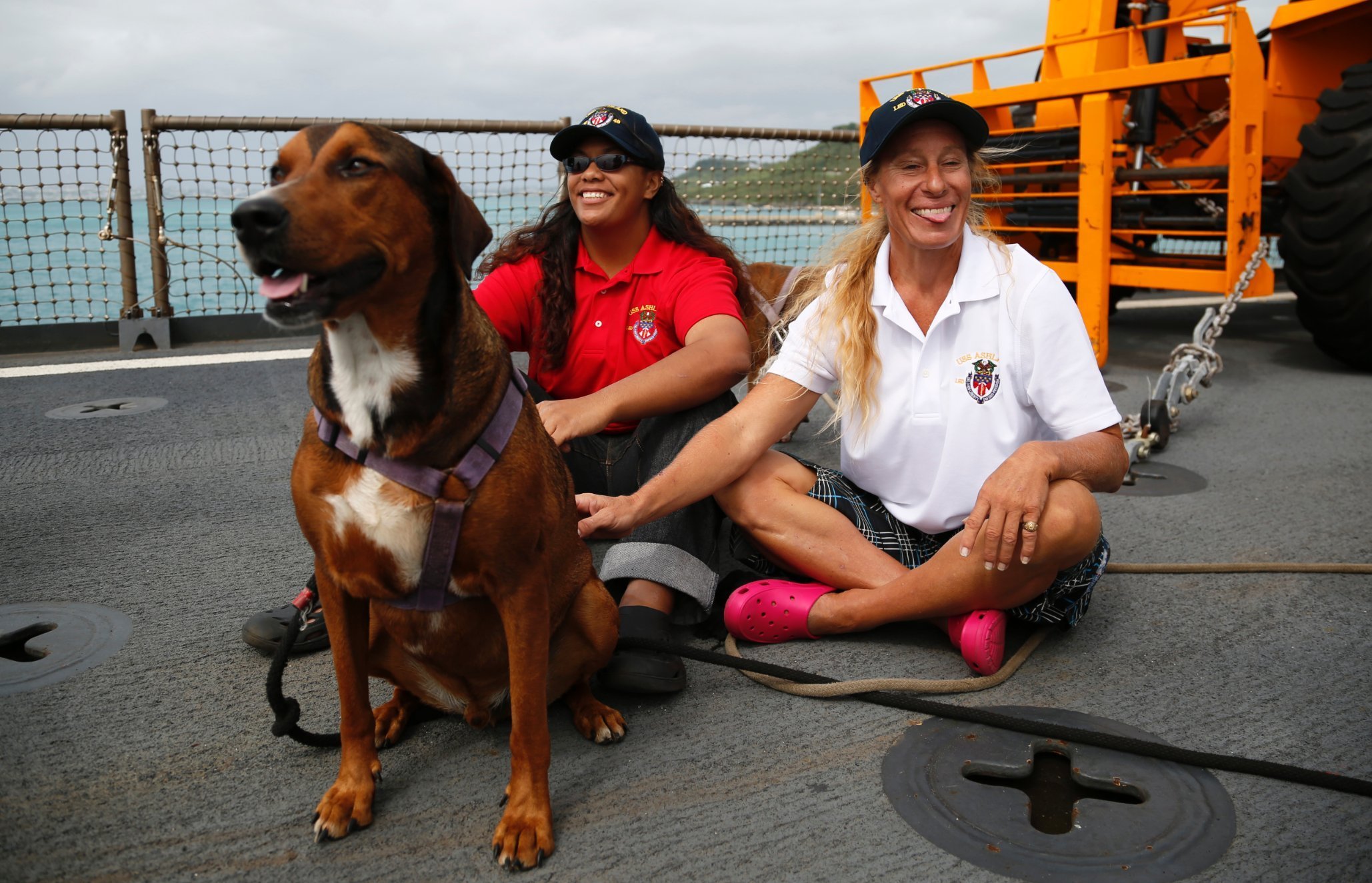 HONOLULU — After more than five months stranded at sea on their crippled sailboat, two American women and their dogs are back on dry land and thankful to be alive.

Honolulu residents Jennifer Appel and Tasha Fuiava arrived at an American naval base in Okinawa on Monday after being rescued by the US Navy and brought ashore on the USS Ashland.

“Had they not been able to locate us, we would have been dead within 24 hours,” said Appel during a news conference on the deck of the ship.

Their long-awaited rescue came on Wednesday. The women and their two dogs were drifting about 900 miles southeast of Japan when a Taiwanese fishing boat spotted them and contacted the US Coast Guard in Guam.

When they saw the naval warship on the horizon, Fuiava’s first reaction was “we are saved!” she told CNN. “They’re actually here to help us. It was great.”

Added Appel, “This turned out to be one of the 10 greatest moments of my life.”

The rescue brought an end to a grueling journey which began May 3 when the pair departed Hawaii on their boat Sea Nymph, which also served as their home in Honolulu.

It was supposed to be an 18-day sailing trip to Tahiti in the South Pacific, from where they planned to visit other islands in the region. But their expedition took several disastrous turns.

The women say their journey was derailed by ferocious storms, multiple shark attacks and a breakdown in vital equipment such as their engine, mast and communication devices.

“We didn’t have our hand radio and our radio telephone wasn’t working. And also our Iridium sat phone was not working,” Appel told CNN. “They’re dependent on the antenna, and when the antenna went out everything went out.

“So we had no way of knowing we were about to enter a typhoon that had winds of 100-150 miles per hour and minimum wave heights of 40 feet,” she added.

Appel said they tried to head towards the republic of Kiribati but couldn’t communicate with its islands to enable a landing because of their damaged antenna. They traveled on towards the Cook Islands, but ended up in a white squall storm that pushed them west.

Working in shifts, the two women traded sailing duties on deck to ensure they’d both get some sleep. But at one point, after novice sailor Fuiava took the helm, they realized they had sailed all night in the wrong direction due to a miscalculation about the strength of the wind.

“It wasn’t until (Jennifer’s) shift, which was during the day, she was like, we’ve been pointing east this entire day, going west,” Fuiava said in an interview with the US Navy after their rescue.

“Honestly I started this trip without knowing anything about sailing,” Fuiava told CNN. “I didn’t even know what a jib was.”

The pair ended up thousands of miles off course in a battered boat, sending regular distress signals.

They managed to stay alive by using a desalination unit to purify seawater and working through the dry food rations they had on board.

“Beef jerky, oatmeal, rice, pasta, dried fruits, nuts … is what we survived on,” Appel said. Ninety percent of their food supplies were gone by the time of their rescue, she added.

They thought they were close to being rescued October 1 when they made contact with officials on Wake Island, a tiny US territory in the middle of the Pacific, after they came within two miles of the shore.

“We actually managed to get a hold of someone. We let them know that we’d been drifting for five months and we needed assistance,” Appel said. “And they responded. They said if we could get to the entrance to the harbor, that they would help us.

‘Thank you for saving my daughter’s life’

Appel said she cried all afternoon after that failed attempt at getting help, only to be consoled by her dogs who “licked our faces and gave us hope,” she said.

Their canine companions, Zeus and Valentine, are now in quarantine on the southern Japanese island chain of Okinawa, where Appel and Fuiava are recovering at the US consulate as they assess their next steps.

Their families are delighted that they’re safe.

Commander Patrick German, Executive Officer of the USS Ashland, said he spoke to Fuiava’s father over the phone, who told him, “Oh my God, thank you for saving my daughter’s life.”

Joyce Appel, Jennifer’s mother, told CNN from her home in Houston that her first question to her daughter after her rescue was “did she have enough food?” She said she had panicked when Jennifer failed to call her on the third day of the trip as she’d promised.

“Then I decided to relax a bit. I figured she was too busy to call…assumed everything was OK…no news is good news,” she said.

Appel and Fuiava say they learned a lot from their doomed adventure at sea. If they take another trip they will take “three of everything” in case of mechanical failures.

But from the safety of dry land they are facing the reality that they may have lost their home, which is likely still drifting through the Pacific.

“The boat was our home and everything that we own is on there,” Appel said. “I don’t know what is going to happen next.”

Their bravery and resilience has inspired the Naval officer who rescued them.

“For them to take off in a sailboat from Hawaii and go through three storms and do all the things that they did to keep the sailboat afloat is nothing short of amazing,” German said. “No kidding, I would go to sea with them anytime.”