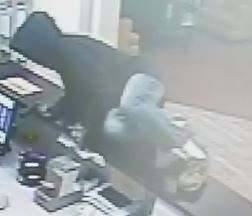 UTAH COUNTY, Utah – Police from three different agencies teaming up to get the word out about a serial robber who has been hitting local hotels and motels for two months now.

The two most recent crimes occurred right next door to one another in Provo Sunday.

The Hampton Inn and the Sleep Inn Motels are just a few feet apart.

Detectives say the same individual robbed both at gunpoint within a few hours that evening.

Then, after comparing notes with officers in Orem and American Fork, they all realized they are likely seeking the same suspect.

Now authorities are asking the public to help identify the suspect and get him off the streets as quickly as possible.

The suspect is described as a white male in his early 20s, between 5-feet-8-inches and 6-feet-tall.

He was wearing a hoodie and was armed, either with a knife or a gun.

Authorities said they would like to hear from anyone who may have information.