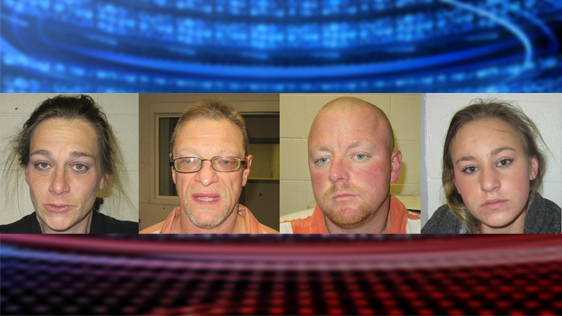 PRICE, Utah — A  drug distribution investigation by several agencies in Carbon and Emery counties led to the arrests of four people in Price earlier this week.

According to a statement from Price Police and the Emery County Sheriff’s Office, investigators found controlled substances, sophisticated surveillance equipment, drug paraphernalia, and evidence of drug distribution at each of the homes.

Police arrested Croft and Thompson late Tuesday night after the pair had allegedly engaged in a drug deal in southwestern Price.

Officers found Croft in possession of 1.84 grams of heroin, 1.4 grams of methamphetamine, drug paraphernalia and $331 in cash, a statement from Price Police said.

Police found Thompson in possession of .9 grams of heroin and paraphernalia, the statement said.

“The officers allegedly discovered information that indicated collaborative drug dealing activities by Croft and Thompson,” according to Price Police.

The arrests of Croft and Thompson led Price Police to contact the Carbon Metro Drug Task Force, and the 7th District Court then approved a search warrant for Croft’s home based on information from both agencies.

Shortly after 2 a.m. Wednesday, as investigators were waiting for that search warrant to be approved, Helmlinger and Tanner pulled into Croft’s driveway in a Chevy Cavalier, according to Price Police.

Neither Helmlinger or Tanner could name the Cavalier’s owner, police said, and they allegedly gave suspicious answers about how they came to possess the car.

Police said Helmlinger pulled out what looked like a .45-caliber semi-automatic pistol, but never pointed it at officers. Police said the gun turned out to be a CO2-powered BB gun.

Officers also found Helminger in possession of drug paraphernalia and $1,631 in cash, according to a statement from Price Police.

Police said Tanner admitted to possessing heroin and paraphernalia, which they seized.

“Investigative information was known to the officers, that allegedly Tanner was a likely client of Crofts and Helmlinger’s and that Croft and Helmlinger were the respective Carbon and Emery counter parts of a local drug dealing operation,” Price Police said.

Croft faces felony charges of distribution of heroin and methamphetamine, and misdemeanor charges of possession of marijuana and drug paraphernalia.

Thompson faces a felony charge of distribution of heroin and a misdemeanor charge of drug paraphernalia.

Helmlinger faces felony charges of distribution of heroin and methamphetamine, a misdemeanor charge of possession of paraphernalia and possession of a dangerous weapon.