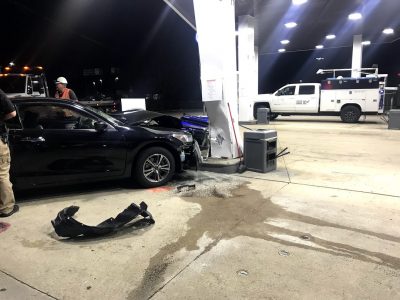 LAYTON, Utah — A man was in critical but stable condition after Layton police say the driver of a car ran a red light and hit the motorcycle he was riding.

It happened Sunday night around 9:30 in the intersection of Main Street and Hill Field Road.

“We had this black Honda Civic was southbound on Main Street and ran through a red light,” Sgt. Scott Clarke with the Layton Police Department said. “And we had a motorcycle that was westbound in the intersection and they had a collision.”

The impact sent the car crashing into a gas pump at the Exxon station at 855 Main Street.

Layton Police Lt. Travis Lyman tells Fox 13 the car was being driven by a 16-year-old male and attributed “inexperience” as the reason the car hit the gas pump.

Drugs or alcohol were not a factor, Lt. Lyman said.

The driver of the car was not injured, but the motorcycle rider was flown by medical helicopter to University Hospital.

Hill Field Road was closed while the crash was cleaned up and the investigation completed.

The case is being screened, but Lt. Lyman said the teenager will be ticketed for a traffic violation.