UPDATE: The Duchesne County Sheriff's Office said more accurate mapping of the fire conducted Tuesday shows the fire is burning on 19,000 acres;  however, fire officials said later Tuesday they are sticking with their estimate of 30,000 acres.

The fire was actively moving to the north and east and was threatening structures on the east side of the fire, Utah Fire Info said.

The human-caused fire started about 4 1/2 miles southeast of Strawberry Reservoir Sunday afternoon. By Tuesday morning there is no containment, but firefighters are expected to give an update Tuesday at 8 a.m.

Pinion Ridge evacuations were from mile marker 61 to mile marker 74 on the south side of US-40.

An emergency alert directed evacuees to go to Duchesne High School, and Curry said the Red Cross is also helping evacuees at the Fruitland LDS chapel.

Buildings have already burned down in the Currant Creek and Strawberry River areas, Curry said, though he said they don't know how many.

He said there were seven crews and about 150 personnel fighting the fire. A Type 2 Incident Team was expected to arrive and take command later Monday.

He said the winds made the fire impossible to manage, nearly grounding all operations for most of Monday.

"It's very, very serious extreme fire behavior," Curry said. "We're not even able to get crews on the ground near the fire. We're also not able to really have much of an aircraft impact."

All fire fighters can do for now, he indicated, is try to get ahead of the flames and protect other houses from burning down.

"We're putting in containment line around homes, we're removing the vegetation," he said.

Monday afternoon, locals like Andrew Adams got official word that they needed to evacuate. Adams and his friends corralled his four horses into trailers.

"It's a little chaotic, but we know what we need to do," he said.

Adams and his friends also planned to haul out his cow, miniature horses and more than a dozen chickens. His phone rang every few minutes, as friends checked in on him. Others showed up with more trailers to help bring the animals out.

Smoke rose ominously behind Adams' house. He said he barely packed up anything in his home, other than important documents.

"I'm not terribly concerned about my property and belongings and stuff," he said. "Main priority is the animals. Stuff can be replaced"

Up the road, Todd Hall packed up his fifth wheel camper with clothing, medical items and documents.

"It's a little scary," he said, watching the smoke in the distance. Flames crested the ridge, and burned toward homes in the hillside.

He doesn't know what things will look like when he and his wife are allowed to return. 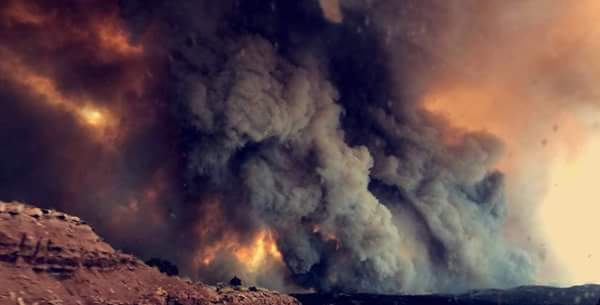