BLUFFDALE, Utah – The Bluffdale Police Department asked for the public’s help Tuesday in identifying the suspect of a theft case.

According to police, on May 2, a package was taken at a residence in Bluffdale.

The suspect in the theft was described as a female in her mid-20’s, with a slender build and brown hair, wearing a black pea coat, blue jeans and a silver ring on her left pointer finger.

The woman exited the passenger side of the vehicle, walked up to the porch, picked up a package, and then got back into the car, which drove away, police said. It appeared that a male was driving the vehicle.

Pictures of the suspect can be seen below: 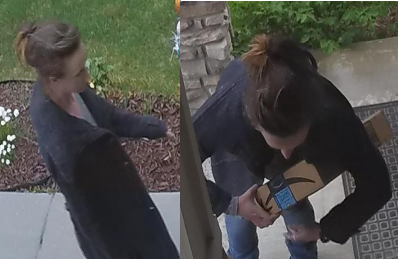