Dispatchers with the Cache County Sheriff's Office said a single-engine aircraft crashed near the Willow Sink Spring area, which is miles up from Hardware Ranch.

Authorities said the plane being flown by a Utah man in his early 40's went down around 10 a.m. Thursday.

The plane crashed in a very remote area in Blacksmith Fork Canyon making it hard for crews to reach the plane on the ground.

“It’s a very thick, heavy wooded area, deep canyons. Part of what we’ve done today is just trying to find an access road for our search and rescue guys to be able to get in, and recover evidence to help with the crime scene,” Sheriff Chad Jensen with Cache County Sheriff's Office said.

The pilot was flying alone, but another pilot saw his flight crash down and reported it.

"The fact that he was able to report it and send life-flight here without use being on the ground so that they could respond, that’s incredible.” Jensen said.

The Life Flight helicopter was able to get to the scene before search and rescue, and the pilot was flown to a nearby hospital with non-life threatening injuries.

"I know he had injuries to his leg and his face but I don’t know the extent of his injuries, he was transported before we got on scene.” Jensen said.

"That’s just going to be a challenge of itself just trying to find a road to get back there,” Jensen said. “It could be a few hours before we get vehicles and personal back to investigate the scene.” 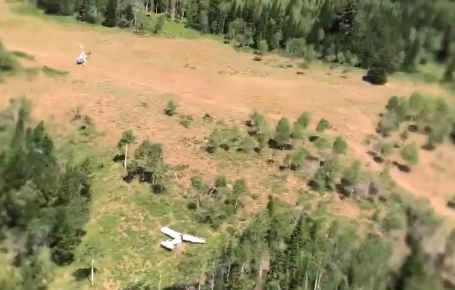