UPDATE: The Coal Hollow Fire is burning on an estimated 24,576 acres in Spanish Fork Canyon and was 2 percent contained as of Tuesday morning.

U.S. Highway 6, which was closed after the fire traveled across it, was scheduled to be reopened Tuesday evening at 8 p.m.

An estimated 575 personnel are fighting the fire, which was sparked by lightning August 4.

See below for the previous story and information on road closures in Spanish Fork Canyon and evacuations in the Diamond Fork area, and check back with Fox 13 for updates.

SPANISH FORK, Utah -- The Coal Hollow Fire jumped U.S. Highway 6 Sunday night, forcing a new round of evacuations and the closure of the highway in both directions in Spanish Fork Canyon.

All of Diamond Fork is evacuated up to Springville crossing and east to Sheep Creek Road, according to the sheriff's office, which says those evacuations are likely to remain in effect through at least later Monday.

The post said the fire had jumped the highway around the Narrows.

Around 4:30 p.m., the Utah Department of Transportation, the Utah County Sheriff's Office and Utah Fire Info all tweeted that U.S. Highway 6 was closed in both directions from mile post 187 at the Thistle Junction with U.S. Highway  89 to mile post 203 which is near the Tucker/Skyline Drive area.

Firefighters wanted to keep the fire from crossing U.S. Highway 6, but weren't surprised it did because of all of the dry fuels and erratic winds and unstable atmosphere in the area.

UDOT suggests using I-70 as an alternate route, which could add one hour or more to normal travel times.

You can check here for updates on this closure.

Trains that run in Spanish Fork Canyon have been shut down and rail crews report that power line poles are actively burning.

"If them lines come down, it's going to take a long time to get 'em across," Operations Section Chief Rob Powell said. "I would expect probably several days, so make plans accordingly."

The road closure was announced about an hour after Utah Fire Info reported extreme fire activity was picking up with the Coal Hollow Fire near Highway 6 and that visibility was becoming very limited.

The Coal Hollow Fire grew 7 percent overnight and had burned over 19,000 acres as of Sunday morning and was 4 percent contained. 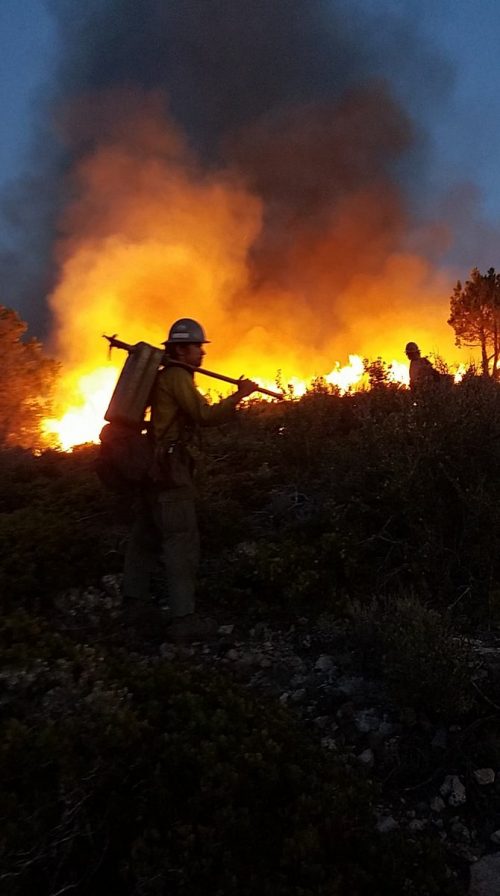