Police: pilot killed in Utah County crashed aircraft into his own home after arrest for domestic violence

PAYSON, Utah -- Police confirm a pilot killed in Utah County Monday crashed the aircraft into his own residence just hours after he was arrested for a domestic violence incident.

The crash occurred at a home near 600 East Canyon Road at the mouth of Payson Canyon at 2:38 a.m. Monday.

Public records indicate Youd lives at the home where the plane crashed with his wife and that the couple bought the home last year. Payson Police confirm there have been previous domestic violence incidents at the home.

Sgt. Noemi Sandoval of the Payson Police Department said Youd was arrested after a domestic violence incident Sunday around 7:30 p.m where he allegedly assaulted his wife in American Fork Canyon.

Sgt. Spencer Cannon, Utah County Sheriff's Office, said their officers responded to an area near the top of American Fork Canyon after witnesses reported seeing an ongoing assault involving Youd and his wife. Witnesses say Youd punched the woman and dragged her at various points during the assault.

Cannon says during the assault Youd allegedly dragged the woman out of a pickup truck and tried to drive away in that vehicle, but she jumped into the bed of the truck. Police say at that point Youd began driving erratically and swerving while she was in the vehicle.

Officers ultimately caught up with Youd further down the canyon and made an arrest. His booking photo from Sunday's arrest appeared to show injuries to his face.

UCSO said they did perform a Lethality Assessment Program as part of that arrest. Police said he was released after making bail around 12:30 a.m. Monday.

Payson Police said Youd requested a "keep the peace" response at his residence, and officers met him at the home, where police say he calmly gathered some of his belongings and then left the residence in his vehicle. Police were at the home around 12:52 a.m. for that call.

Sandoval said the next thing police knew, the man had crashed a plane into his home after taking off from Spanish Fork Airport. The first call about the plane crash came in around 2:38 a.m.

The plane is a Cesna 525 Citation Jet that did not belong to Youd, but he had access to the aircraft through his employer.

Sandoval said Youd is an experienced pilot and he flew directly from the airport to the home.

Police say the plane struck the home after Youd flew by several power lines without striking them, though the plane did impact a vehicle on the street before impacting the home.

Youd's wife and her adult son were in the home at the time of the crash and escaped unharmed.

Plane crashes into house at the mouth of Payson Canyon.

"There were two individuals in the home at the time that the plane went in," Sandoval said. "They were able to get out of the home without any injuries. Obviously they were very shook up over what had happened but they weren't physically injured."

The home itself caught fire and became fully engulfed before crews arrived and extinguished the flames.

The plane was destroyed.

"There was a significant fireball, so there's not a whole lot left of the plane itself," Sandoval said.

A video shows the airplane flying low before it impacts the home and a fireball erupts, and another video shows a closer view of that fireball. See the player embedded below for both clips.

Watch Fox 13 and check back online for updates. 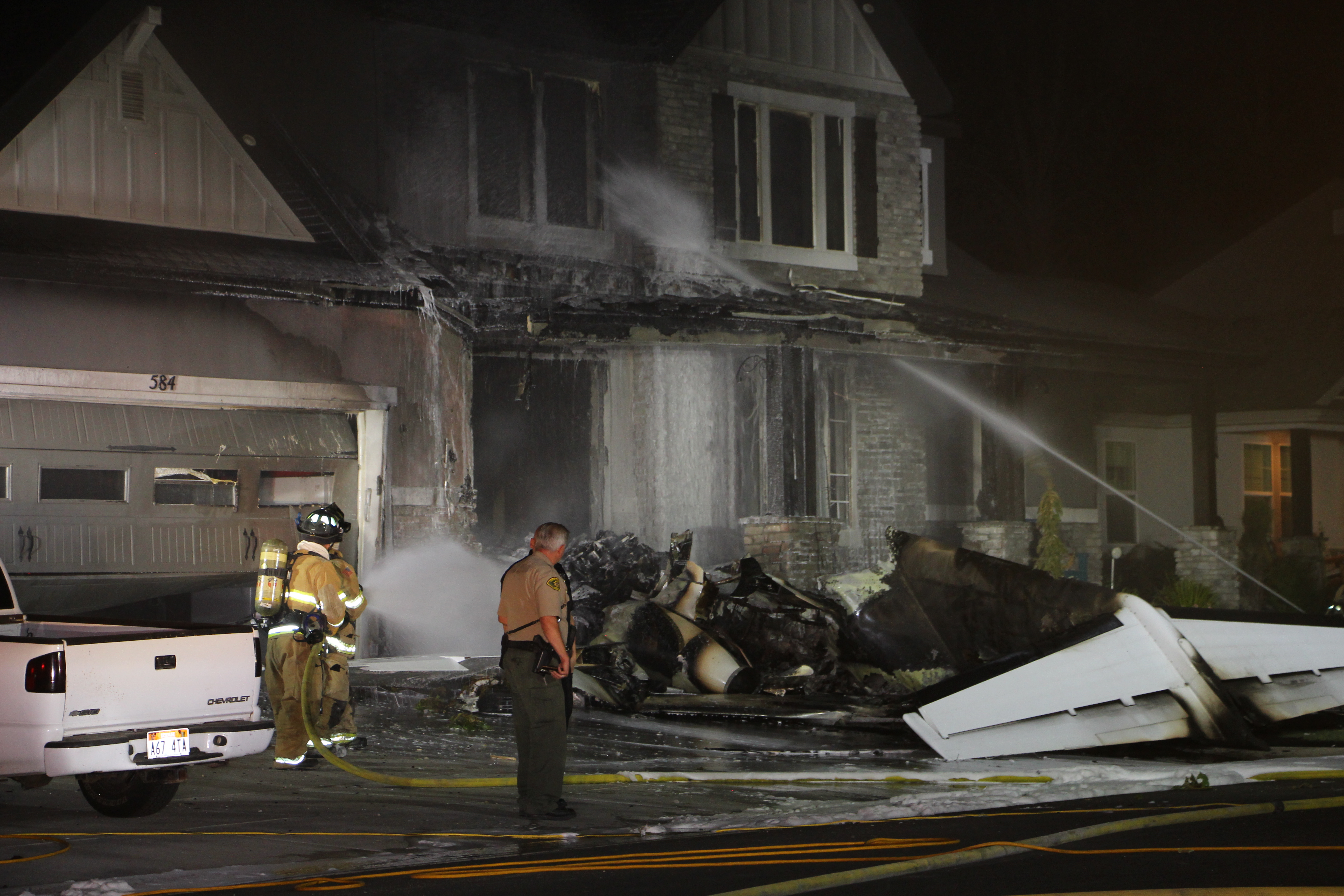