Police released three surveillance stills of the suspects, who appeared to be a male and a female: 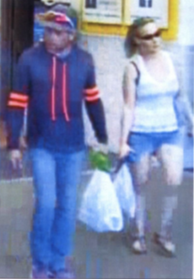