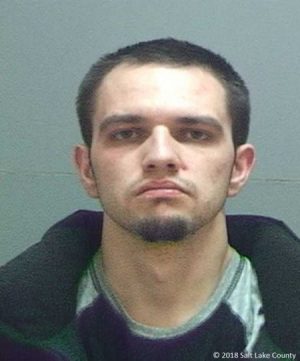 Employees at the Radisson Hotel located at 2177 West North Temple called police around 6:45 p.m. to report a guest had checked in using reward points on a fraudulent credit card.

There were seven occupants in the room when officers arrived.

Charon was found in possession of burglary tools and several shaved keys as well as articles used to manufacture fake checks.

He was booked into jail on suspicion of forgery and the manufacture and possession of burglary tools.

Ekachinda was charged with forgery for booking a room in the name of a person he admitted to police he did not know.

A search of the room turned up a large quantity of stolen and fraudulent documents.

25-year-old Scott Memmott was also in the room and officers determined he was on probation for past convictions.

Agents with Adult Probation and Parole were called to the scene and they searched a car Memmott had been driving.

According to a probable cause statement, four forged temporary Utah driver’s licenses were located in the car.

All four had the information of actual Utah residents, but the photos had been changed.

Memmott was booked on suspicion of four third-degree felony counts of possessing a forgery writing device.