LAYTON, Utah -- Several Davis County women have a warning, after they said they found mysterious notes on their car that they believe were placed there with suspicious intentions.

More than half a dozen women, who shared photos of their notes on social media, said they found the letters while parked at various businesses around Davis and Weber Counties.

The notes are all written similarly, and signed by a "Chris," who also provides his phone number.

Alyssa Rahter said her friend found the note on Rahter’s car as they left Dollar Tree in Layton on Sunday.

“Hi Beautiful Ladies,” it reads, in all caps handwriting. “Sorry to be so intrusive, but I couldn’t resist! It’s just not right to pass up such a good opportunity. I wanted to stop by and say hello, but I was overwhelmed by your looks.”

The letter continues to talk about how the two “girls” are gorgeous, and how it made the man’s day.

“I took a huge risk, and have never done this before. Forgive me for being random and spontaneous! Take a chance! Friends?” the letter finishes.

The man wrote his name and number, then underneath: “Totally text me!!”

At first, Rahter said she thought the note was nice, and she decided to reach out to the man. However after talking back and forth, she said the conversation turned creepy.

Rahter explained that the man sent her texts that were sexual in nature. He sent general pictures of himself, told her he was 31 years old and eventually gave her his name. He also asked to take her to dinner.

Her mom decided to do some research, and Rahter said her mother sent her documents. She found the man has a criminal history and is on probation for a sexual crime involving a minor.

"That's when I really freaked out,” Rahter said. “He's a convicted child predator basically, and he had been stalking [a different] girl for ten years."

When Rahter confronted “Chris” about his past, she said he stopped responding to her.

Rahter posted her letter on social media, with a message of awareness about the man and his letter. Several other women commented that they, too found letters on their cars. 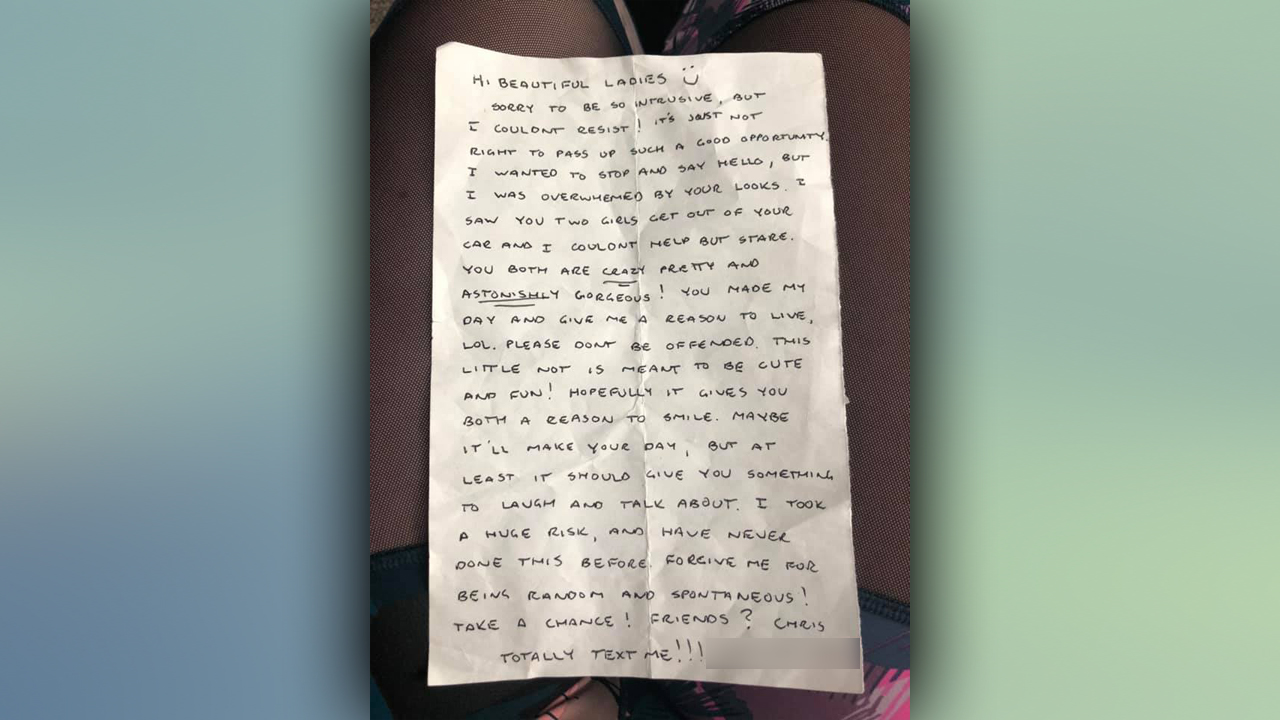 Each letter features all caps handwriting, start in an almost identical way with a similar message, and signed by a “Chris" with the same phone number.

A woman named Ashley Coates said she found the note on her car at the Walmart in Layton, but she didn't text or call "Chris."

Diana Mendez also said she found a note at Walmart in Layton, this one last May. She said she took a picture of the note and threw it away.

Liz Hill said on December 18, she encountered "Chris" at a Riverdale gas station, where she said he's an employee. He inquired on where she worked, and she said when she went out for a break later that day, she found the note from him on her car.  She said she works in Marriott-Slaterville.

Hill said she reached out to him, but that he "lost it," when she wouldn't respond right away to texts and became furious when she wouldn't visit "Chris" at his work. She said he blew up her phone, and "told me I deserved everything coming to me."

Roommates Abigail Hawkes and Marissa Prims said they were with their third roommate at Layton Hills Mall on January 12. They walked out and found the letter tucked under a door handle.

"Hi beautiful ladies,” read Hawkes, as she held the letter. “I’m so sorry for being so intrusive, but I couldn’t help myself.”

The man later wrote, “I had to do something random and crazy to get your attention. Please don’t be offended. This is meant to be cute and fun. Maybe my little note will make you smile.”

“Chris” asks in about being friends, and tells the women he wants to go shopping or grab a bite to eat, on him.

"You all totally made my day!!! Thanks for being so awesome and amazing!" Hawkes said. He signed his name followed by, "Please text me, I'm single. Lol."

Hawkes and Prims, like Rahter, took the note as a sweet gesture and decided to text him. They said he told them he was 29 years old, and they each reported that their text conversations went in a weird direction.

Prims said “Chris” offered to take her on a trip to Costa Rica, and shared deeply personal details about his life. She said when she didn’t respond right away, he’d continually text her.

They set up to go to lunch, the two said, but decided to cancel at the last minute. Now, they’re glad they didn’t meet up with him.

"I just want to make sure everyone is safe, and it doesn't happen to someone where they go out of their way to meet this person, and something bad happens to them," Prims said.

Rahter said her friend contacted Layton Police on her behalf. Layton Police told Fox 13 that leaving the letters is not breaking a law, however anyone who finds a letter on their car should not contact the person who wrote it. They said anyone who feels concerned or uncomfortable should call police.