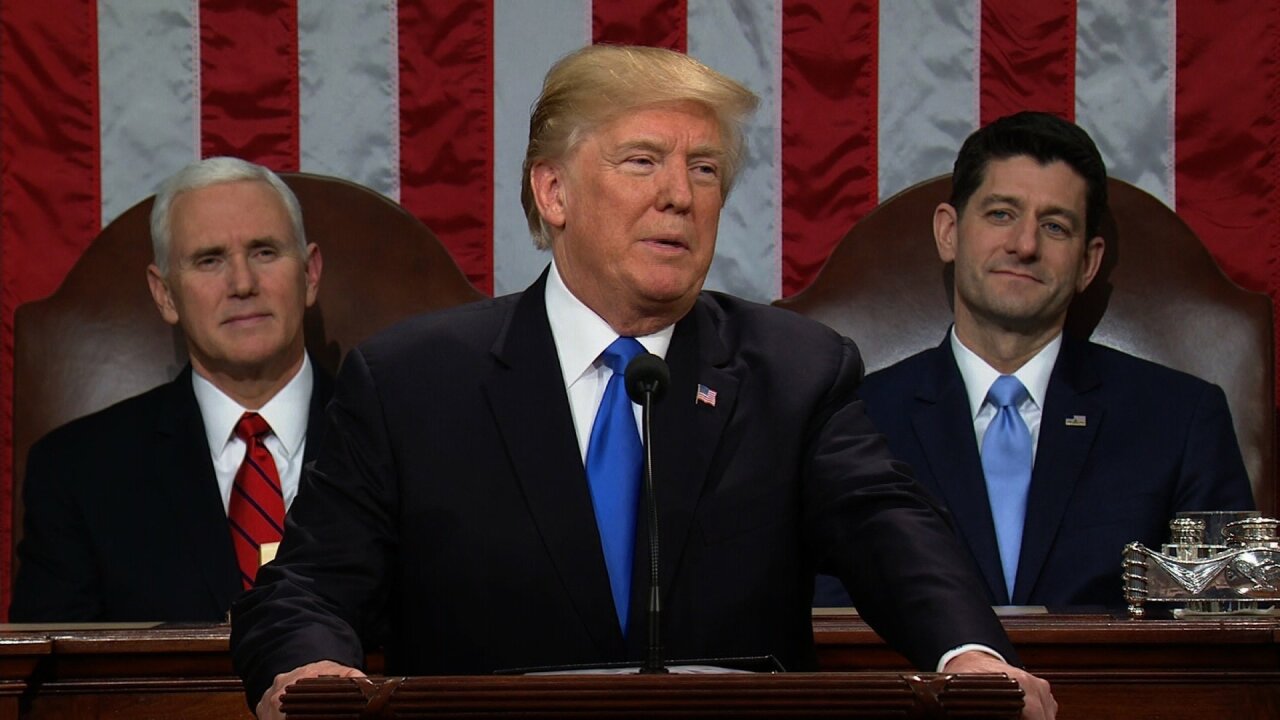 President Donald Trump speaks at the 2018 State of the Union.

WASHINGTON — Donald Trump is set to deliver what his advisers claim will be a unifying State of the Union speech on Tuesday before a skeptical audience that for the first time will include a Democratic House majority.

Many of the President’s past attempts at bipartisanship have quickly evaporated amid tweeted barbs and the driving issue of the day — a $5 billion border wall — is staunchly opposed by most Democrats and most Americans.

Trump will step into the House chamber around 9 p.m. ET with the aim of changing at least some minds on the wisdom of his policies and with his political nemesis, House Speaker Nancy Pelosi, seated over his left shoulder.

Even though some Republicans are beginning to show signs of breaking with the President, most followed in lockstep during the first two years of his term. That’s left the White House looking for lines that can draw applause and cheers from at least the GOP lawmakers, if not the entire Congress.

Sections on fairer drug pricing, criminal justice revisions and combating HIV/AIDS have been included in a nod to areas that have garnered bipartisan support. Yet immigration — which has divided Washington — remains a major focus of the speech.

Ahead of the address, Trump was sniping at Democrats who have already dismissed his calls for unity. Senate Democratic leader Chuck Schumer accused the President of “blatant hypocrisy” in remarks on the Senate floor Tuesday.

“He’s just upset that he didn’t win the Senate, after spending a fortune, like he thought he would,” Trump shot back on Twitter.

The annual address from the US Capitol is one of the most familiar set pieces of the presidency, and one of the most watched. Trump believes it can lend his arguments credibility at a vulnerable moment, as his poll numbers trend lower and Democratic challengers — many of whom will be in his audience — begin to announce their intentions.

Polls show Trump unpopular among most Americans and a monthlong partial government shutdown over securing funds for the wall only damaged him further. But there are no signs he is backing off his demands and he has said he won’t hesitate to close the government again if lawmakers cannot send him a long-term funding measure with the wall funding. They have until February 15 to reach an agreement.

It now appears more likely he’ll declare a national emergency on the southern border as a way to secure the wall money without congressional approval. Aides debated whether to announce the move during the State of the Union but ultimately decided against it. Last week Senate Majority Leader Mitch McConnell warned Trump during a private meeting that such a move would be unwise.

Asked Tuesday whether Trump will directly address the state of divided government in Washington, White House counselor Kellyanne Conway told reporters that he will call for unity with Democrats — which “implicitly” addresses that divisiveness.

“He is, in the way that he’s calling for bipartisanship and unity,” she said. “That implicitly addresses the fact that there’s a divided government.”

“But that doesn’t mean they can’t work together,” she continued, pointing to bipartisan efforts on criminal justice.

Immigration will be a central focus of the address, according to advisers, but won’t make up the entire thing. Trump will also trumpet a surging US economy and tout foreign policy wins, including his efforts to go after ISIS. He suggested over the weekend that he may make an announcement about new gains against the terror group, which has been losing territory in Syria.

Once expected to announce the date and location of his second summit with North Korean leader Kim Jong Un during the speech, Trump will leave that for another time. The top US negotiator is still in Pyongyang finalizing details of the meeting.

Trump spent part of last weekend at his Florida estate reviewing drafts of the speech, and delivered a few practice versions from behind a lectern set up in the White House Map Room. The President, who isn’t known for sticking closely to script during remarks, usually does follow his teleprompter closely during the State of the Union address.

That means the written text for this speech is more important than other sets of presidential remarks. As he has in the past, policy adviser Stephen Miller is heading up the speech-writing process. Miller is also the West Wing’s most vocal immigration hardliner, leaving little question of how the issue will play during the speech.

Conway said Tuesday the President has “sharpened up” the text of the speech and “put it in his own voice.”

The speech itself was delayed a week after a bitter back-and-forth with Pelosi, who asked Trump to postpone the address, during the prolonged shutdown. Advisers pitched Trump on delivering it at an alternate location — such as Independence Hall in Philadelphia or along the southern border — but he rejected those ideas, saying the speech must be from the House chamber.

He’s invited an assortment of guests to sit with first lady Melania Trump, including family members whose loved ones were murdered by undocumented immigrants and former prison inmates whose sentences he reduced. The White House also invited a sixth-grader from Delaware, Joshua Trump, who says he’s been bullied because of his last name.