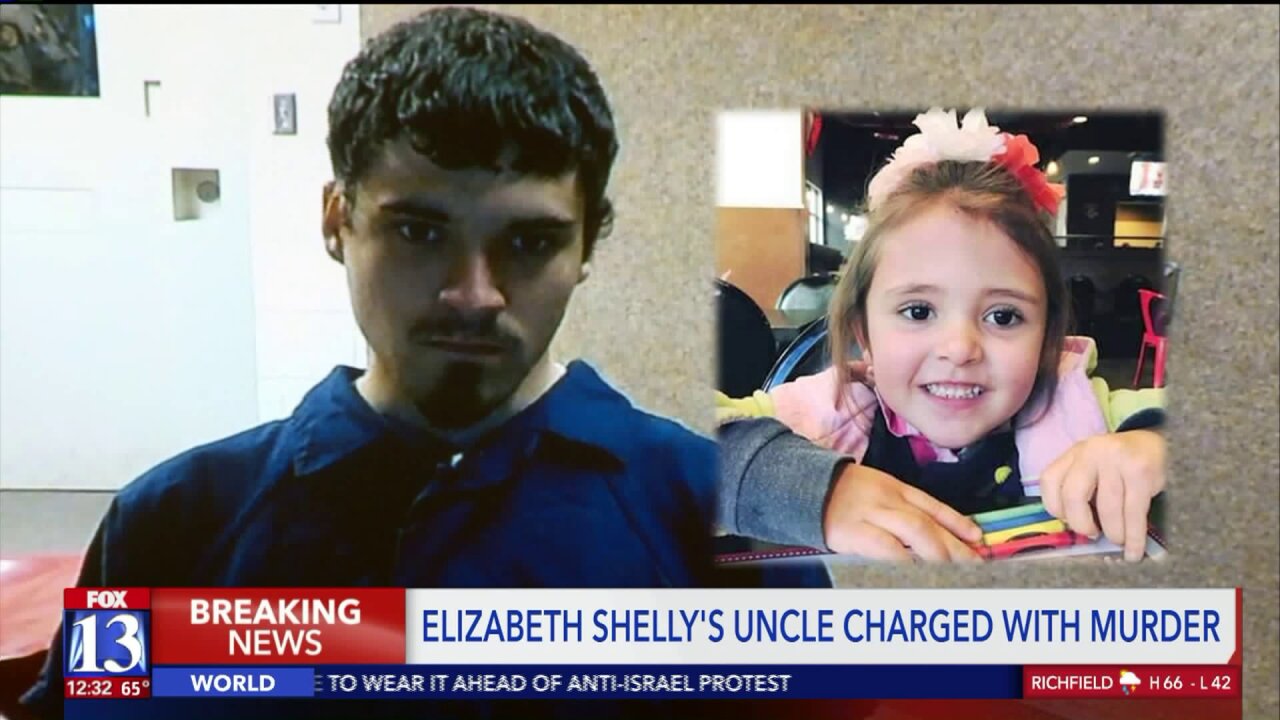 LOGAN, Utah -- A man has been charged with kidnapping and murdering his 5-year-old niece, and a five-day search for Elizabeth Shelley appears to be at an end.

An attorney for the suspect,  21-year-old Alex Whipple, said he disclosed the location of her body  Wednesday afternoon.

Whipple is Elizabeth's uncle, and he has been charged with aggravated murder as a capital felony, child kidnapping as a first-degree felony, two counts of obstructing justice as second-degree felonies, and one count of desecration of a human body as a third-degree felony.

Authorities said Whipple was invited to his sister and her boyfriend's home Friday night. Elizabeth was reported missing Saturday morning after her mother discovered she and Whipple were no longer in the home.

Police located Whipple alone Saturday around 3 p.m., took him into custody for violating his probation, and interviewed him.

When he was found, Whipple had a 24 oz beer, a baseball bat, and  "a pipe commonly used for narcotics" among his possessions.

Charging documents state Whipple began "licking his hands and trying to wipe his hands clean" and that he had dark stains on his pants that looked like dried blood.

The document states Whipple initially lied about his whereabouts before admitting to being at his sister's home the night prior. He later claimed he was there, but said he left the home alone to go for a walk.

Whipple told police he had been drinking that night and later told investigators that "alcohol makes him 'black out' and sometimes he does 'criminal things' when he blacks out. Alexander would not elaborate to what these 'criminal things' were."

He also alluded to "how evil the world we live in is" and talked about his struggles as a child and claimed his family mistreated him, the document states.

Police searched around the home and located a knife that appeared to have been taken from the family home.  The knife was broken and had blood on it. The knife was one of a matched set, the rest of which were at Elizabeth's home.

Investigators also found scraps of Elizabeth's clothing, which they said appeared to have been hastily buried under dirt and bark.

DNA testing revealed that blood matching Elizabeth's DNA was found on Whipple's watch, his sweatshirt and on the knife.

"Today is a difficult day, our thoughts continue to be with Lizzy's family. This tragic event has shaken our community. We are touched by the tremendous show of support from so many. We thank all those who have aided and who continue to aid in the search. The Cache County Attorney's Office is committed to fighting for justice. Justice for Lizzy, her family, and our community."

Click here for details on the investigation and the timeline of Whipple's movements.

The Cache County Children's Justice Center states a donation account has been opened for the family at Zions Bank in the name "Elizabeth Shelley Donation". There is also a GoFundMe page, here.