SALT LAKE COUNTY — The Salt Lake County Health Department has released its annual disease report, and sexually transmitted diseases are at the top of the list.

The department’s 2018 Infectious Diseases Morbidity Report lists the most commonly reported diseases in the county. The two most common were chlamydia and gonorrhea — the sum of which was higher than the rest of the top 20.

Syphilis and HIV also made the list at numbers 10 and 16, respectively.

“As with adults, sexually transmitted diseases are among the most prevalent infections in our youth 15–17 years old,” executive director Gary Edwards said in a press release. “This is alarming, and an indicator that our current approach to sexually transmitted disease education is not working. Teens need accurate, realistic, and comprehensive STD education—whether that’s at home, at school, at church or in another venue appropriate for the discussion.”

The health department reports that 85% of the 5,279 reported chlamydia cases were between the ages of 15-34.

The department’s STD clinic offers testing and treatment to you ages 14 and older with or without parents’ permission, the department stated. The clinic is located at 610 South 200 East in Salt Lake City. Patients can walk-in or call to make an appointment at 385-468-4242.

The full report can be found on the county’s website here. 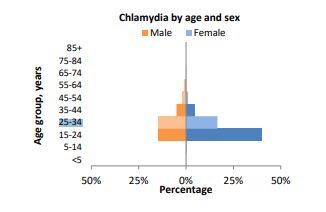