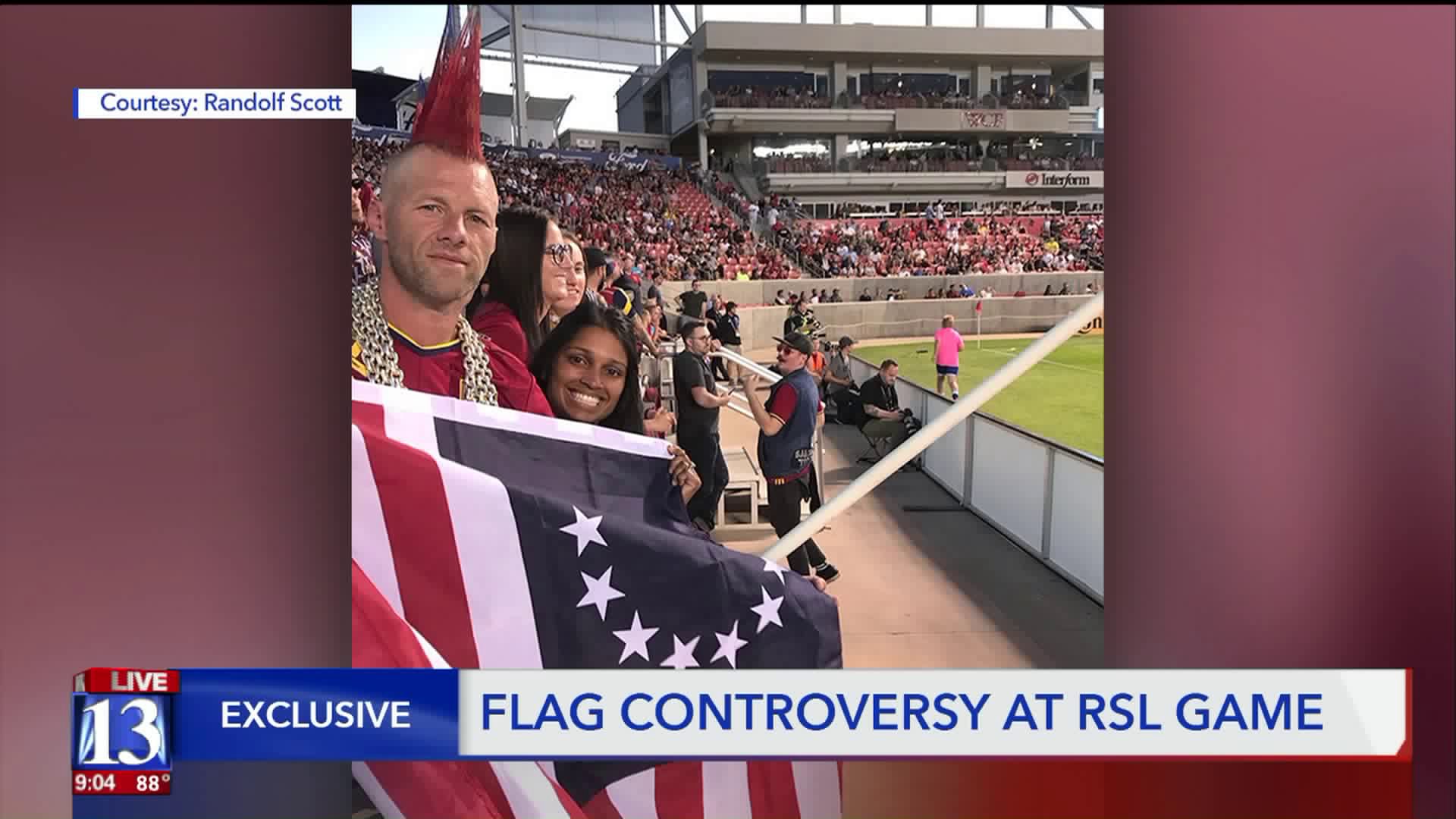 A Real Salt Lake fan brought a "Betsy Ross" American flag to a game at Rio Tinto Stadium in Sandy, Utah, but he says officials told him to put it away. 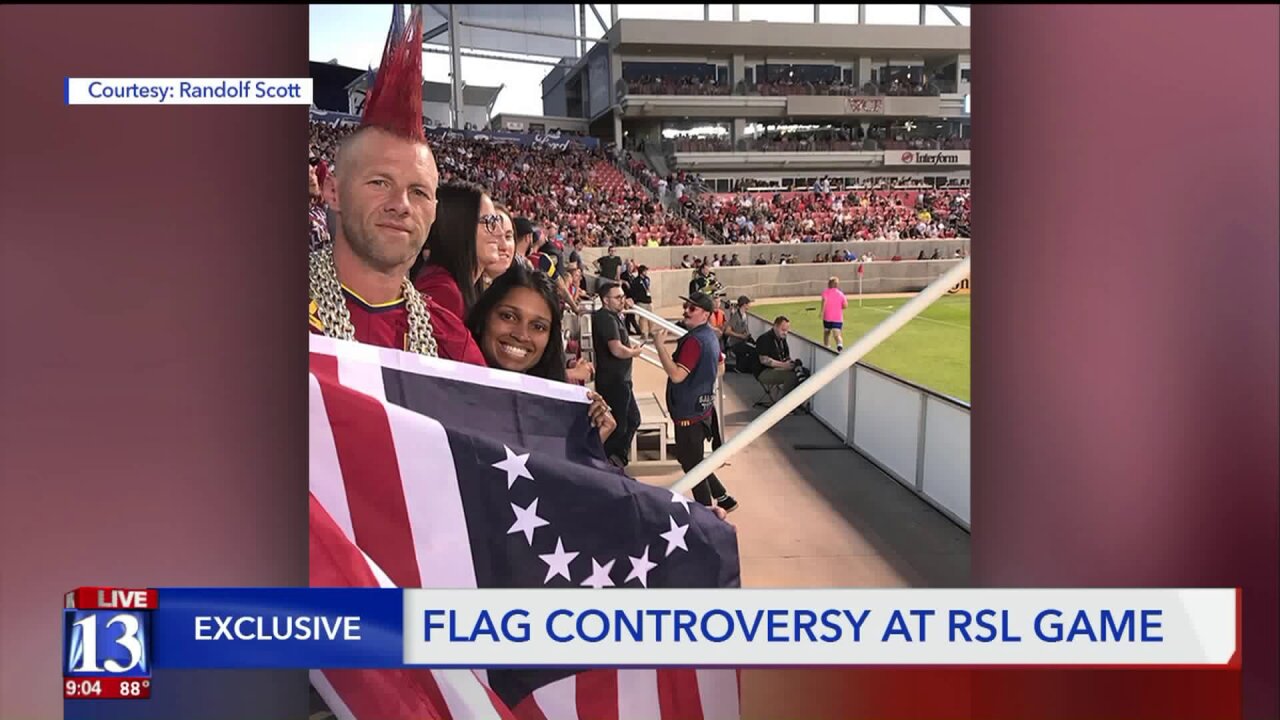 SANDY, Utah -- A Utah County family that brought a Betsy Ross flag to a Real Salt Lake soccer game is speaking out, after stadium staff asked them to take the flag down.

RSL team leadership said the flag is banned, and indicated that it doesn't fit with their mission of inclusion and unity.

"Soccer is just a big part of our life," Diana said.

Most known for his brightly colored mohawk sometimes painted like an American flag, Randolf stands right up front during games. He brings a bag with RSL swag, big chain necklaces, and an American flag that he waves.

At recent home games, he's gotten more attention than usual because of a new item he added to his game gear.

It's the commonly named Betsy Ross flag, which was an early version of the American flag. It has 13 stars in a circle, versus the 50 stars featured today.

"Diana bought it for me actually, because my other flag was kind of old and falling apart," Randolf explained.

When they swapped the 50 stars for the circle of 13 two home games ago in early August, it ignited a firestorm against Randolf on social media.

When they brought the flag to the game again last weekend, complaints escalated and stadium staff approached the couple, to ask them to take the flag down.

"They kept telling us if he wasn’t going to take it down, we were going to be rejected from the game," Diana said.

At first, they said they wouldn't take it down because of all the other types of flags flying in the stadium.

When another staff member came up and talked to them again later, they put the flag away.

In a statement to Fox 13, Real Salt Lake explained that they don't want that flag waving at games. Team Chief Business Officer Andy Carroll cited a desire for acceptance and inclusion.

"Recently, and very controversially as well as surprising to us, the Colonial flag has been adopted as a symbol for hate groups," Carroll's statement read. "Any controversial flags or other similar banners or signs with symbols of hatred, divisiveness and/or intolerance whether intentional or otherwise will not be permitted in our stadiums. Period.”

The Scotts had heard about some of the controversy surrounding the flag, and Diana said she saw in the news that Nike removed shoes that featured the Colonial flag in July.

It's been reported that the decision came after Colin Kaepernick expressed his concern to the company.

Many take issue with the flag because it represented America during the era of slavery, and more recently has been appropriated by white supremacist groups.

A number of discussions and debates swirled around, history lessons on Betsy Ross, analysis by groups like the Anti-Defamation league.

"It just kind of bothered me that [Nike was] going to take it away," Diana said.

When Diana saw the flag at a store, she said she decided to buy it.

The Scotts said they take no issue with stadium staff, or the team. Their main issue, they explained, was the backlash they received because some of the comments suggested inflicting violence on Randolf.

"When people see me or Diana with this flag, I hope they can understand that it’s about the freedoms we have here in America," Scott said. "The legacy that America has."

Real Salt Lake's message of intolerance for controversy comes less than a month after the team fired former head coach Mike Petke when he allegedly used racist and homophobic slurs during a confrontation with referees.

Here is the full statement from Real Salt Lake:

“At Real Salt Lake it is our mission to unify our community through soccer and we promote inclusion, diversity and acceptance. It is important that everyone in the community not only feel welcome at our stadiums, but appreciated, respected and valued. Rio Tinto Stadium is reflective of that on match day and we encourage a unifying and welcoming environment to all fans at all of our RSL and Utah Royals FC matches. To be permitted to bring a flag into any of our stadiums is a privilege. Recently, and very controversially as well as surprising to us, the Colonial flag has been adopted as a symbol for hate groups. Any controversial flags or other similar banners or signs with symbols of hatred, divisiveness and/or intolerance whether intentional or otherwise will not be permitted in our stadiums. Period.”